Since the early 1900s, people have used a variety of vehicles to travel in the Denali region. These transportation methods have shaped the experiences of people who live in and visit the area. 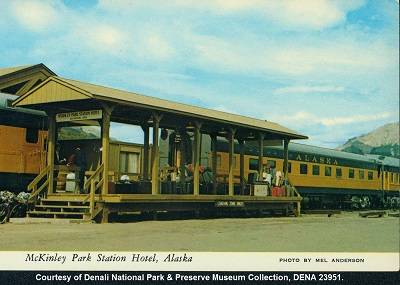 Color postcard of an Alaska Railroad train at the McKinley Park Station Depot. Three people are standing on the platform, along with several piles of luggage. The caption reads “McKinley Park Station Hotel, Alaska. Photo by Mel Anderson.” On the back is written “Another ‘Alaska Joe’ Original”. The postcard was produced around 1990.

The histories of Denali National Park and the Alaska Railroad have been closely intertwined since the early 1900s. The building of the Alaska Railroad was an essential element in the creation of Denali National Park, and the railroad has played a crucial role in providing access to the park. In return, transporting visitors to the park has been an important source of revenue for the railroad.

After visiting the Denali region between 1906 and 1908, naturalist Charles Sheldon began campaigning for the creation of a national park to protect the area's wildlife. In 1914, Sheldon’s idea became more urgent after Congress passed the Alaska Railroad Act, authorizing funding to build a railroad from Seward to Fairbanks. Sheldon was concerned construction of the railroad would bring more hunters to the region and wipe out the area’s sheep, caribou, and other large game.  At the same time, the leaders of the railroad project supported Sheldon's vision because increased tourism to a national park would produce more revenue for the railroad.

Railroad construction started in 1915. In 1917, Mount McKinley National Park (later renamed Denali National Park & Preserve) was established. By 1921, construction crews had reached Riley Creek, near the present-day entrance to the park. President Warren Harding visited the park in July 1923, on his way to Nenana to drive a golden spike into the ground, marking the completion of the Alaska Railroad.

Until the Denali Highway opened in 1957, the railroad was essentially the only way for tourists to reach the park. Railroad officials ran a tourism campaign based on the access to the park, calling the railroad "the Mount McKinley Route" and proclaiming both the park’s beauty and the rewards of a park visit. Beginning in 1923, visitors would arrive at the McKinley Park Station and be taken by horseback, car, or bus to the Savage River Tourism Camp. Although only 34 visitors came that first year, by 1935 the railroad carried 665 tourists to the park.

The first depot at McKinley Park Station was a converted boxcar, but it was replaced in 1925 by a small building. Over the years the depot has been replaced several times, most recently in 2003, and is now known as the Denali Depot.

Today thousands of visitors take the train to the park. During the summer, the Alaska Railroad's Denali Star Train travels from Anchorage to Fairbanks, stopping in Denali twice daily. 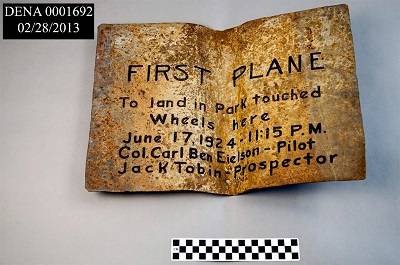 Sign made of heavy sheet metal. There are three holes lined up vertically in the middle of the sign, for attaching to a post.  Printed in black paint are the words: “FIRST PLANE to land in Park touched Wheels here June 17, 1924 - 11:15 P.M. Col. Carl Ben Eielson - Pilot Jack Tobin - Prospector". Metal is corroded. The date of manufacture is unknown.

Airplanes have played an important role in the history of Alaska. In February 1924, pilot Carl Ben Eielson made the first commercial airmail flight in Alaska, from Fairbanks to McGrath. Within a few years, airplanes replaced dog teams as the preferred method for transporting mail and cargo in rural Alaska. This transformed the lives of Alaskans; they could now communicate more quickly with people in other areas, and receive supplies on a regular basis.

On June 17, 1924, Eielson landed the first airplane in Denali National Park, an event commemorated by this sign. Eielson transported miner Jack Tobin to the Copper Mountain mining district, landing on the Thorofare gravel bar (near the present-day Eielson Visitor Center). The airplane Eielson piloted during this flight, a Curtiss JN-4D ("Jenny"), is part of the UA Museum of the North's collection and is on display at the Fairbanks International Airport.

Eielson, a well-known aviation pioneer in Alaska, died in 1929 when his plane crashed during a rescue flight off the coast of Siberia. In 1930, the U.S. Congress officially changed the name of Copper Mountain to Mount Eielson in his honor.

After Eielson's flight, park staff encouraged airplane access in the park. Between 1925 and 1927, the Alaska Road Commission built two airfields in or near the park: one near Lake Minchumina, and one between Moose Creek and Wonder Lake. In 1930, the Mount McKinley Tourist & Transportation Company offered the first airplane flights for tourists. These trips left from an airfield near the Savage River Camp and flew to Mount Eielson and Muldrow Glacier. In 1935, the flight cost $35 per person. This was the first time a park concessioner was allowed to land airplanes in a national park.

Throughout the 1930s, more airstrips were built in the park, including one near the McKinley Park train station and another near the Stampede Mine, where the Clearwater Fork meets the Stampede Creek. During World War II, Army engineers enlarged and improved the Morino airstrip at McKinley Park Station. The Army also used airplanes to transport and supply members of their cold weather testing expeditions.

After World War II, airplanes continued to be an important aspect of the park. Pilot Don Sheldon became famous for his glacier landings on Denali. In 1954, he flew the first commercial flight from Talkeetna to the Kahiltna Glacier. Between 1937 and 1976, mountaineer and photographer Bradford Washburn pioneered the use of aerial photography in the park, shooting photographs from the open door of a Bellanca Skyrocket. He took over 8,700 aerial photographs over four decades.

Today, many companies offer flightseeing tours in and around the park. Pilots are also welcome to fly their own airplanes to the park. 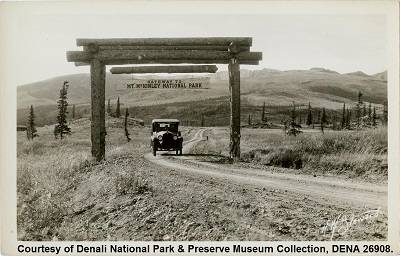 Black and white photograph of an automobile on a dirt road. There is a wooden arch over the road, with a hanging sign reading “Gateway to Mt. McKinley National Park.” This photograph was taken around 1930, and the photographer is likely H.W. Steward (as indicated by signature in lower right corner of photo). Alaska Railroad employees built the arch near the railroad depot in 1926 to welcome visitors. It was located west of the present depot on the original road, which has since been rerouted. The arch was disassembled sometime after 1939.

When Mount McKinley National Park (later renamed Denali National Park & Preserve) was established in 1917, there were no roads in or around the park. The only ways to reach the park were by dog team in winter, or by foot, horseback, or boat in summer. The Alaska Railroad was completed from Seward to Fairbanks in 1923, providing train access to the area. However, park staff knew that in order to attract visitors, they needed to build a road into the park from the railroad depot. At the same time, the Alaska Road Commission wanted to provide road access to the miners and traders who worked in the Kantishna area.

In 1922, Superintendent Harry Karstens and other park staff constructed a 12-mile wagon road from park headquarters near Riley Creek to the Savage River. The following year, The Alaska Road Commission began work on a 92-mile road from the railroad depot to Kantishna. Construction crews built five to ten miles of the road each summer, until it was finally completed in 1938.

The park road has been crucial for attracting tourists since its early days. By 1924, when the road was completed to Savage River, visitors arriving by train could be driven by car or bus to the Savage River Tourism Camp. From there, they could take automobile excursions further into the park, including a one-day trip to Polychrome Pass and a two-day trip to Mount Eielson. During this period, almost all tourists rode in vehicles operated by the Mount McKinley Tourist & Transportation Company. The only way visitors could bring their own cars was to load them on the railroad. Despite the expense, some tourists did take their private vehicles to the park. In 1935, Mr. C.E. Long of California was the first person to drive a car from the contiguous 48 states within the park.

In the 1920s and 1930s, park staff increasingly used cars and trucks to perform maintenance around the park, taking over duties previously assigned to horses. Karstens purchased the park's first car in 1922, using it to power a wood saw. Over the next few years, rangers purchased two trucks and a tractor to haul logs, pull stumps, and carry supplies. Due to increased use of vehicles, by 1940 the park no longer employed horses.

Although the park road provided access inside the park, there were still no roads connecting the park to the rest of Alaska. This changed in 1957 when the Denali Highway opened, connecting Cantwell (south of the park entrance) to Paxson on the Richardson Highway. This brought a major increase in visitors, from 5,000 in 1956 to 25,000 in 1958. In preparation for increased visitation, the National Park Service built several new campgrounds, and the Alaska Road Commission widened and straightened several sections of the park road, as well as replacing most of the bridges.

In 1971, the completion of the Parks Highway connected Anchorage and Fairbanks, cutting the travel time to the park from these cities by more than half.  By the summer of 1972, visitation to the park had doubled. The National Park Service, worried about impacts of increased traffic on wildlife and the ability of the park road to handle more cars, closed the park road to private vehicles past Savage River, and started a shuttle bus system to transport vehicles further into the park.

Today the Parks Highway, along with the Alaska Railroad, is one of the main ways to access Denali National Park. Tens of thousands of visitors take tour buses or drive their vehicles to the park, and from there the bus system offers numerous trips further into the park.

For more information on the park road, go to the History of the Park Road page. 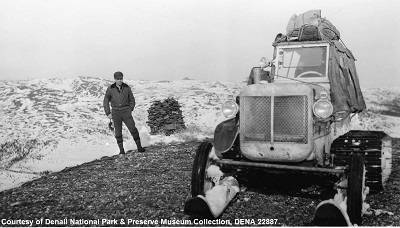 Black and white photograph of Ranger Oscar Dick at the Wonder Lake boundary marker in January 1947. Dick stands next to a M-7 snow jeep used for winter patrols in the park. The tractor is equipped with two wheels and two skis in the front. Behind each wheel is a rubber track. A pair of snowshoes is strapped to the top of the tractor. Photographer is unknown.

During World War II, the U.S. Army Air Corps designed the M7 snow tractor (also called a snow jeep, a Snow Trac, or a Sno-Cat) to serve as a rescue vehicle in snow-covered terrain. The vehicle used many components from Allis-Chalmers farm tractors, and was equipped with both skis and rubber tracks.  Its top speed was 41 miles (65 km) per hour. In November 1944, the Army brought seven of these tractors to Denali National Park to help with rescue efforts after an army airplane crash. Acting Superintendent Grant Pearson was impressed with the vehicles, and in 1946 the park obtained two surplus snow tractors.

Park rangers began using the snow tractors for long-distance winter patrols. A tractor could cover more ground in a day than a dog team, but park ranger John Rumohr noted, "the dogs have less trouble with their carburetors". The rubber tracks also had a tendency to break. In 1952, park naturalist William Nancarrow took a dog team on a 13-day patrol after the snow tractor he was using broke down. Despite these issues, park rangers continued to use snow tractors during patrols throughout the 1960s.