Take a look behind the scenes at the museum! Tour the labs and meet researchers who make discoveries about the science, culture, health, and environment of Alaska. 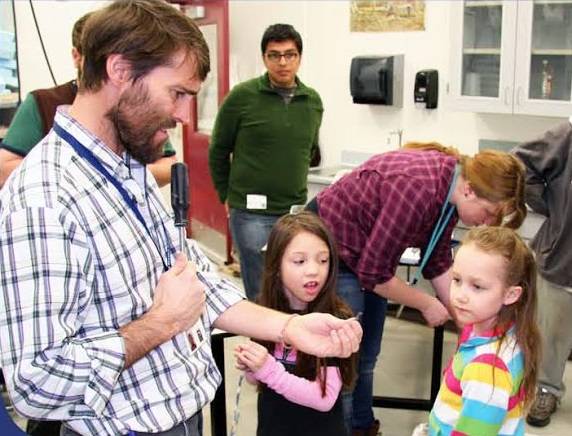 These public events offer an opportunity for the public to discover specimens from our collections. With over 2.5 million objects to care for, there's plenty to see.

ARCHAEOLOGY -  The collection includes more than 1 million artifacts representing sites as old as 14,000 years and is a resource for studying human occupation of Alaska.

EARTH SCIENCES - With  over 60,000 ancient items to see, including fossils, gems, and the world’s largest collection of polar dinosaurs, you're sure to discover something new.

ENTOMOLOGY -  The museum’s youngest collection contains over 350,000 cataloged specimens of animals that have their skeletons on the outsides of their bodies, representing 40% of the almost 9,000 species of arthropods in Alaska.

ETHNOLOGY & HISTORY - The collection contains over 17,000 objects created and used by the people of Alaska and the Circumpolar North from the mid-1700s to the present.

FILM CENTER -  The Alaska Center for Documentary Film preserves the changing cultures of the North with more than 400 hours of material.

FISHES -  The collection recently doubled with the transfer of thousands of specimens from Southeast Alaska, including species from historic biological surveys and more recent fieldwork.

GENOMIC RESOURCES -  The frozen tissue collection in one of the largest of its kind in the world, featuring samples from specimens archived in all of our collections.

HERBARIUM -  The herbarium maintains a permanent record of Alaska’s flora with its collection of pressed dried plants – more than 270,000 specimens from Alaska and the Circumpolar North.

MAMMALOGY -  The mammal collection is the tenth largest in North America, with more than 140,000 specimens of terrestrial and marine mammals from Alaska and beyond.

ORNITHOLOGY - The bird collection, with more than 42,000 specimens, is the world's largest of Alaska birds and includes many species from northwestern North America and eastern Asia.