Although the landscapes of Denali National Park & Preserve may appear to be almost untouched by humans, indigenous people have lived in the Denali area for over 13,000 years, and continue to live there today.

One way to learn more about ancient peoples and their cultures is by examining the objects they left behind. Discover this rich cultural history through a selection of archaeological artifacts from the Denali museum collections. 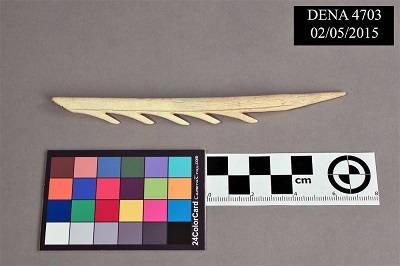 Projectile point made of antler, approximately 14 centimeters (5.5 inches) long. It has five barbs protruding diagonally from the main body; each barb is about 1 centimeter (0.4 inches) long. A long crack runs horizontally across the body of the object.

This projectile point would have been attached to the main shaft of a spear or arrow, and used for hunting animals. The barbs were designed to catch in the skin of the animal.

This artifact was found near Polychrome Mountain in Denali National Park. Similar artifacts found in Alaska have been dated to between 100 to 1500 years old. They tend to be part of the Athabascan culture, which is well-known for bone and antler tools. Athabascan people continue to live in the Denali area today. 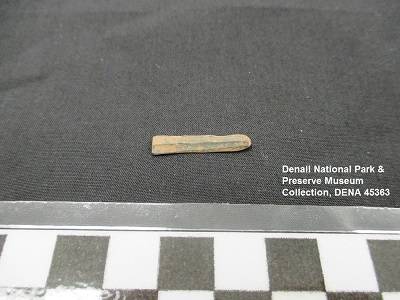 Microblade, made of chert. It is 2 centimeters (0.8 inches) long. On the top stone flakes have been chipped away, forming three distinct faces. The bottom is flat and smooth. This microblade was excavated at the Teklanika West archaeological site near the Teklanika River in Denali National Park. This artifact is dated to between 7,000 and 8,000 years old.

A microblade is a long narrow stone flake with parallel sides. Several microblades would be inserted end-to-end in a groove cut into wood or bone (similar to sticking razor blades into slots on a flat pencil). This provided a continuous cutting edge. Tools with microblades were likely used for a variety of purposes,  most importantly to hunt a variety of animal species such as caribou and bison. 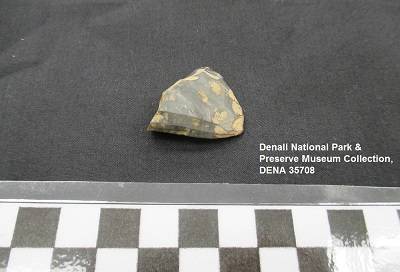 Wedge-shaped microblade core, made of chert. It is approximately 3 centimeters (1.2 inches) long. Stone flakes have been chipped away from one edge, leaving parallel lines. This microblade core was excavated at the Teklanika West archaeological site near the Teklanika River in Denali National Park. This artifact is dated to about 8,000 years old.

A microblade core is the stone from which microblades are made. A person would use a small piece of bone to apply force to the top of the core, chipping off a long narrow stone flake to be used as a microblade. Several microblades could be made from a single core.

Illustration by Duleepa Wijayawardhana, based on original by Ralph Pastore, courtesy of the The Newfoundland and Labrador Heritage Website. 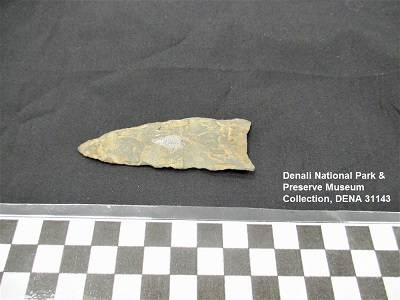 Lanceolate projectile point, made of basalt. It is approximately 8 centimeters (3.1 inches) long. It is wider at one end, and narrows to form a point on the other end. This artifact is undated, but is likely between 9,000 and 10,000 years old.

The projectile point was excavated at Teklanika West, an archaeological site in Denali National Park. The site sits on a granite bluff overlooking the Teklanika River and surrounding landscape. Teklanika West was a lookout site, where prehistoric hunter-gatherers could watch a wide area for game.

The word “lanceolate” describes the shape of the projectile point: it expands from the tip into a curved form and gradually converges towards the base or corners. Lanceolate projectile points have been found at archaeological sites across North America. 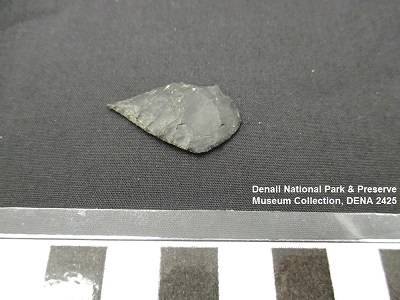 Teardrop-shaped point, made of black chert. It is 2.5 centimeters (1 inch) long, and 1 centimeter (0.4 inches) at its widest point. This artifact is undated, but similar artifacts found in the Nenana River valley have been dated to 13,000 years old.

Points with this teardrop shape are called Chindadn points. This shape is associated with what archaeologists call the Nenana Complex, a cultural tradition that existed in interior Alaska about 13,000 years ago. Archaeologists are not sure exactly how Chindadn points were used, but suggest they were possibly used as knives.

People from different cultures around the world created points in a wide variety of shapes. Today, archaeologists examine these distinctive shapes in order to identify different cultural traditions and learn more about how ancient people lived. 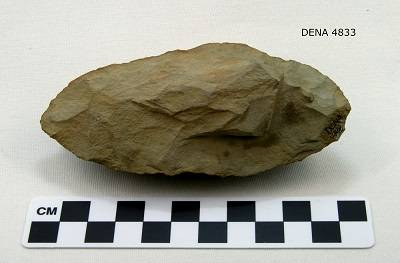 Stone biface, made of rhyolite. It is approximately 12 centimeters (4.7 inches) long. Stone flakes have been chipped off both sides, forming a pointed surface at one end. This artifact, along with a similar biface, was found on the west side of Spruce Creek, near Kantishna, in Denali National Park. This biface is undated, but could be up to 14,500 years old.

A biface is a stone tool that has been worked on both sides. The maker would have chipped off stone flakes from both sides of the stone in order to shape it. Many ancient cultures made and used bifaces as cutting tools.

This biface is made of rhyolite, a type of fine-grained volcanic rock. Rhyolite is a common rock in Interior Alaska, and ancient people in the area commonly used rhyolite to make tools.

This biface is an example of how people use natural resources to meet their needs. Thousands of years ago, an individual needed a tool to cut with. They found an ideal rock in their environment, and chipped away at it until it formed the correct shape. Today, people in the Denali region continue to use the abundant natural resources to sustain themselves. 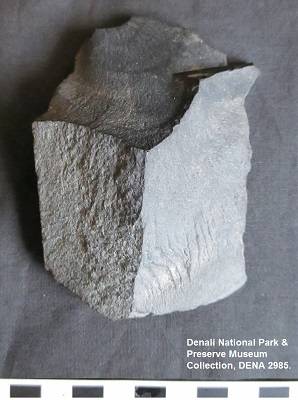 Stone scraper, made of black basalt. It is approximately 10 centimeters (3.9 inches) long and 7 centimeters (2.8 inches) wide. Flakes have been chipped off on all sides to form smooth surfaces. Two edges show signs of wear from being used. This scraper is undated, but could be up to 14,500 years old.

Ancient tools such as this scraper were handmade, and each one was slightly different. Although the person who made this scraper is unknown, knowledge of tool making was and continues to be passed down from generation to generation.