The earliest forms of transportation were human-powered. Throughout history, people have and continue to walk, run, snowshoe, and ski to get around. 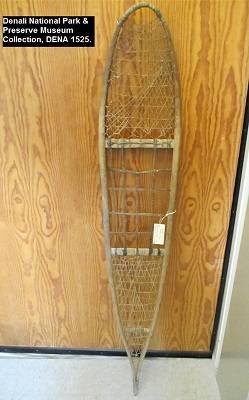 The webbing is made of sinew woven across the frame. A wooden cleat is lashed to the front cross-member. The other snowshoe in this pair is also in the Denali Museum Collection (DENA 1524). The maker(s) is unknown.

Alaska Native people have used snowshoes for thousands of years. Snowshoes work by distributing the weight of the person over a larger area so that the person's foot does not sink completely into the snow. People make snowshoes in various shapes and sizes for use in different snow conditions. Large snowshoes with fine netting are ideal for walking on deep, soft snow. In some areas of Alaska, people also use shorter snowshoes for walking on ice.

Snowshoes make traveling in wintertime easier and quicker. Dog mushers carry snowshoes in their sleds so they can make a trail for their dogs if needed. Hunters use snowshoes for tracking down game and checking trap lines.

Snowshoe making is a complex art. 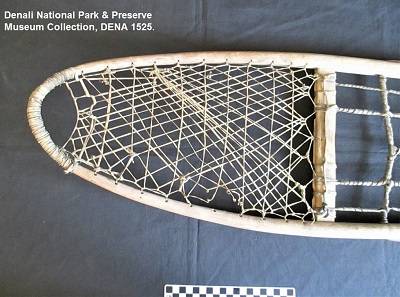 It requires knowledge of how to select the right materials, bend and carve the wood, make the lacings, and weave the webbing. Although today many people use contemporary snowshoes made from plastic or lightweight metal, Alaska Native master artists continue to make snowshoes in the traditional style and to pass down these skills to younger generations.

In the early 20th century, explorers, gold miners, and fur trappers in the Denali area used snowshoes to travel during the winter months. Some prospectors and trappers walked ten to fifteen miles a day on snowshoes.

In the early days of Denali National Park, rangers sometimes patrolled the park on foot, using snowshoes. During a 1936 trip to survey and mark the park boundaries, the six-member crew travelled on snowshoes for twelve days. In the 1960s, rangers continued to patrol many areas of the park on snowshoes. Today, snowshoeing is a popular winter activity in the park. 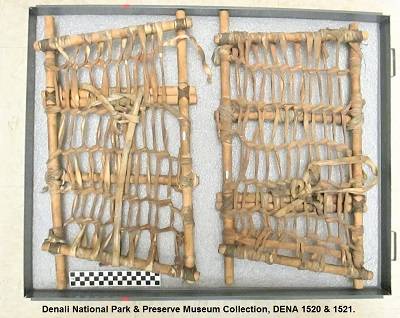 Pair of handmade rectangular snowshoes, constructed with 20 mm (0.78 in) dowels lashed together with sinew, nylon cord, and copper wire. Three dowels across the middle section are intended to support the boot. On one snowshoe, a dowel is broken. The webbing appears to be made of nylon coated on one side with a waxy substance.

Einar Nilsson made these snowshoes from tent poles and parachute shrouds in 1942 during the Army Test Expedition on Denali (Mount McKinley).

In 1942, the U.S. Army Alaskan Testing Expedition conducted cold-weather and high-altitude equipment tests in Denali National Park. The expedition was organized by the Army Quartermaster’s Corps, with support from the Army Air Forces, the Medical Corps and Signal Corps, the Canadian Army, and the Royal Canadian Air Force. From June to August, the seventeen members of the expedition camped on the edge of Muldrow Glacier, testing everything from tents and parachutes to food rations, stoves, boots, and socks. Denali Park rangers aided and supplied the expedition, sometimes on foot and sometimes on horseback. The U.S. Army continued to conduct cold-weather testing expeditions in the park until the end of World War II.

Einar Nilsson was born in Sweden in 1901. He worked as an electric engineer, and was a member of the American Alpine Club. During World War II, Nilsson worked for the Office of the Quartermaster General. During the 1942 Test Expedition, he climbed the south peak of Denali, along with Bradford Washburn, Terris Moore, and Robert Bates. Nilsson died in 1989 in California.

Pair of skis made from hickory wood.  A triangular metal reinforcing plate is attached to the tip of each ski. On the underside of each tip are the words “NORTHLAND U.S. ST. PAUL, MINN.” The bindings are made of leather, and attached to the ski with screws. Each ski has two metal strips along the underside, one on each long edge. The skis were originally painted white, but the paint has mostly worn off, leaving flecks of white paint near the tips. The Northland Ski Manufacturing Company made these skis sometime
between 1912 and 1945. The skis' original owner is unknown. 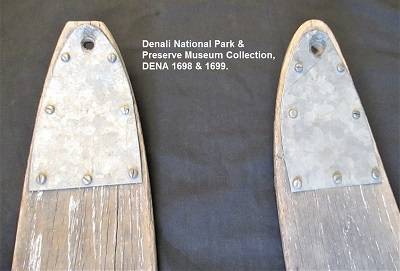 The skis are approximately 50 inches (127 cm) long. It appears that they were originally longer, but were cut shorter at an unknown date, possibly to make them easier to carry.

In 1912, Ole S. Ellevold founded the Northland Ski Manufacturing Company in St. Paul, Minnesota. It soon became one of largest manufacturer of skis in the world. It also made snowshoes, hockey sticks, toboggans, and water skis. Larson Industries bought out the company in 1966. 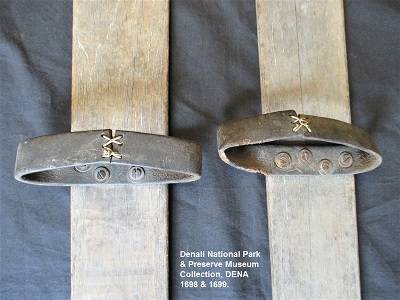 Skiing is an ancient form of travel, originally developed to make traveling over snow quicker and easier. People in Scandinavia, Russia, and China have used skis for thousands of years. Archaeologists have found 8000-year-old fragments of ski-like objects in northern Russia. Skis came to Alaska with the arrival of European explorers; Alaska Natives used snowshoes and dog teams for winter travel instead of skis.

In the early days of Denali National Park, rangers used skis for wintertime transportation. From the 1940s to the 1970s, rangers occasionally conducted ski patrols to areas such as the Teklanika River. Skis were also used in mountaineering; in 1932, members of the Lindley-Liek expedition were the first to use skis on their ascent of Denali. Today,
the National Park Service still recommends climbers use skis or snowshoes
until they reach the camp at 11,200 feet.

In addition to its practical uses, skiing is also a popular recreational activity and sport for millions of people across the world. In the park, recreational skiing first gained popularity during the 1940s as Army soldiers on leave at the Mount McKinley U.S. Army Recreation Camp built a ski tow near Mile 6 of the park road. After World War II ended, the McKinley Park Hotel continued to maintain ski runs for visitors to enjoy. Although those ski runs are no longer in operation today, cross-country skiing remains a popular wintertime activity in the park.