Around the world, people rely on animals to make transportation easier. In the Denali region, dogs, horses, and mules have been used to transport people and carry supplies. Today, park rangers still use dog teams for winter patrols. 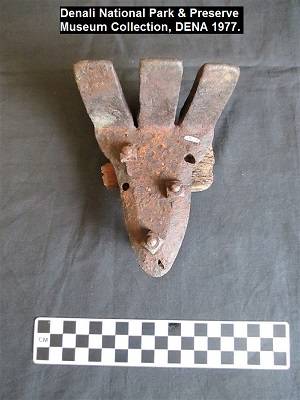 Three-pronged dog sled brake with bolts for attaching it to the sled. A broken piece of wood is attached. Found in 1982 in Denali National Park. Metal is corroded and wood is decayed.

Dog mushers use brakes to slow or stop a sled dog team. A brake can have between two and five prongs, and is attached to the bottom of the sled. When the musher steps on the brake, the prongs dig into the snow, causing the sled to slow down.

Alaska Natives have used dogs for transportation for thousands of years. Dogs pulled toboggans and sleds, and carried loads of meat, skins, and camping gear on their backs in skin packs.

The miners who came to the Denali's Kantishna area in the early 1900s relied heavily on dog teams for transportation, to haul supplies, and to deliver mail. Local Athabascan people often drove these dog sled teams. In 1913, the Stuck-Karstens party used dogs to haul supplies for their historic expedition to summit the south peak of Denali.

In 1922, Superintendent Harry Karstens purchased the park’s first sled dogs and established a kennel. In the 1920s and 1930s, park rangers used dog teams to patrol park boundaries, prevent hunters from illegally killing wildlife, establish trails, respond to emergencies, and haul supplies. In the 1940s, park staff used dogs for winter patrols less frequently, preferring to use snowshoes and snowmobiles instead. However, in 1952, rangers returned to using sled dogs, along with other forms of transportation, and except for a brief period between 1960 and 1963 (when a snowmobile was used instead), dog sled patrols have continued to the present day.

Today, Denali is the only national park in the country with a kennel of sled dogs. The dogs are Alaskan huskies, bred specifically to pull heavy loads for long hours. These dogs are typically between 60 and 90 pounds (27 to 40 kilograms) and have dense fur and fluffy tails to keep them warm in winter.

Two million acres of the park is designated wilderness, and motorized vehicles are prohibited in this area. Denali's sled dogs provide an alternative to using helicopters, planes, or other vehicles. Even in areas where motorized vehicles are allowed, dog teams are often more reliable in cold weather. During the winter, the dogs provide transportation for rangers, haul trash away from the park, transport supplies to repair historic buildings, deliver scientific equipment, and check on winter recreation use. In the summer, one of the most popular activities for park visitors is stopping at the kennels, petting the dogs, and watching a sled dog demonstration. 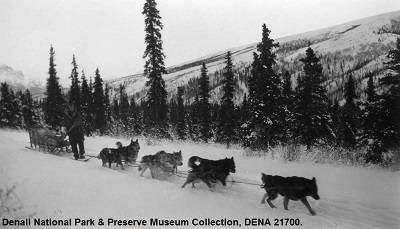 Black and white photograph of Ranger John Rumohr on a winter patrol in 1940 or 1941. Rumohr stands in front of a dog sled. Seven dogs are hitched to the sled. Photographer is unknown.

Although in the 1940s sled dogs were used less frequently in the park, rangers still occasionally used them for long distance patrols. 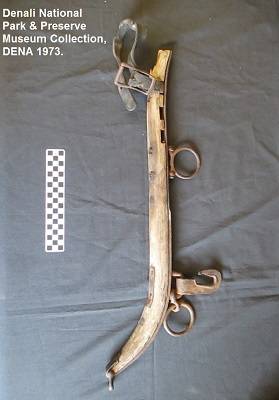 Wooden hame, used for harnessing a horse or mule. A long metal piece is attached to one side of the wood. Near one end, a leather buckle is threaded through a hole in the wood.  Two metal rings and a hook are attached to the metal near the opposite end. This hame, along with another one, was found in 1982 in Denali National Park.

Hames are essential pieces of equipment for harnessing horses to a wagon or other heavy load. They help evenly distribute the weight of the load along the horse's shoulder. A hame consists of a curved piece of wood or metal, fitted into a groove on a horse collar. A collar has two hames, one for each side of the horse's neck; they are held together by leather straps or metal links on the top and bottom. Long straps, known as traces, connect the lower end of each hame to the wagon or other load.

In the early 1900s, explorers, gold miners, and naturalists in the Denali area used horses to haul supplies and for transportation. When construction crews began building the Alaska Railroad in 1915, they used horse-drawn sledges and wagons, among other forms of transportation, to carry supplies and workers from Anchorage and Nenana.

In 1922, the first superintendent of the park, Harry Karstens, purchased three horses to help with transportation, hauling logs, pulling stumps, and carrying supplies to cabins in the park. A horse stable was constructed near park headquarters in 1928. However, park staff purchased a truck in 1932 and a tractor in 1935; automobiles took over most of the horses' duties, and by 1940 the park no longer employed horses. 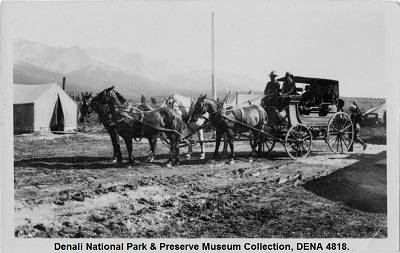 Black and white photograph of a stagecoach pulled by four horses. Two people wearing hats sit on the stagecoach, and another person is walking behind the stagecoach. Wall tents are visible in the background. Written on the back is "McKinley National Park. Stage used for transporting visitors in and around and to and from the park. Several of these stages were in use. Aug 1926". Photographer is unknown.

Horses played a large role in early tourism at the park. When the Savage River Tourism Camp - located near today's Savage River Campground at Mile 13 of the Denali Park Road - was established in 1923, the only way to access the camp from the railroad depot was to ride on horseback. From Savage River, visitors could explore deeper into the park on horseback or by horse-drawn stagecoach. By 1928, the Mount McKinley Tourist & Transportation Company owned four stagecoaches, which they used for the “Big Game Drive” excursion, a nine-mile trip along the Savage River. In 1935, the same company offered a three-day horseback trip from Mount Eielson to McGonagall Pass for $82.50 per person. Visitors could also rent a riding or pack horse for $5 per day.

Although automobiles eventually became the major form of transportation for tourists, horses continued to be used in the park. In 1942, when the U.S. Army Alaskan Testing Expedition conducted cold weather tests in the park, they relied on rangers on horseback to bring them supplies. Horseback riding was an option for soldiers visiting the Mount McKinley U.S. Army Recreation Camp during World War II.  Horses have also been useful for scientific research; in 1957, graduate student Jack Gross rode on horseback as he conducted Dall sheep surveys inside the park. Today several companies still offer horseback rides in the park.