Skip to main content
Museum of the North
Educators

The soaring peaks of the Alaska Range have captured people's imaginations for thousands of years. The lure of climbing Denali has and continues to be a significant factor in Denali National Park & Preserve's history.

By exploring objects related to mountaineering, we can better understand the experiences of mountain climbers throughout the years, and how mountaineering has shaped the history of the Denali region. Discover this history through a selection of mountaineering-related objects and photographs from the Denali Museum Collections. 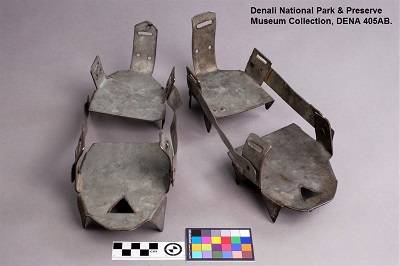 The homemade crampons were left on the Muldrow Glacier on Denali (Mount McKinley) by members of the 1910 Sourdough Expedition. In 1932, the Lindley-Liek Expedition found and recovered them. 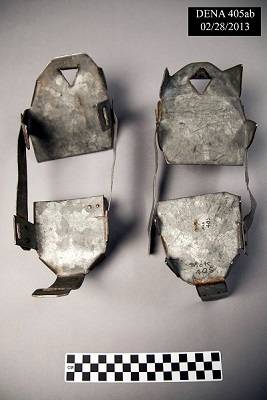 About the Sourdough Expedition: In November 1909, four gold miners (Tom Lloyd, Peter Anderson, Charley McGonagall, and Bill Taylor) set out to be the first to climb Denali; to win a bet, and to disprove explorer Frederick Cook's claim that he had summited Denali in 1906. The trip began in December 1909 as the group left Fairbanks with their horses, mule, and dog teams.
On April 3, 1910, the group, minus Lloyd, set out to reach the summit. With a bag of doughnuts, three thermoses of hot chocolate, some caribou meat, and a 14-foot spruce pole, they became the first party to summit the 19,470-foot north peak of Denali. They became known as the Sourdough Expedition, and had met the challenge of climbing with what is considered rudimentary gear and no technical climbing experience. In 1913, the Hudson Stuck climbing party saw the spruce pole when they summited the south peak and verified that the Sourdough Expedition had summited the north peak.

Information about the Sourdough Expedition comes from the National Park Service Centennial One Object Exhibit.

Download activities and resources related to the Sourdough Crampons:

PDFs meet accessibility standards. If you encounter any issues, please contact us at ua-museumlearn@alaska.edu. 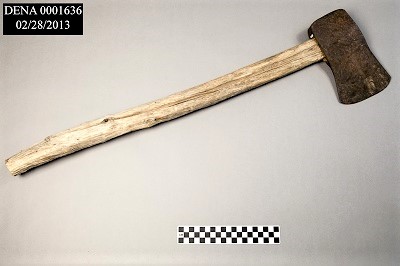 This ax has a single bit (blade) and a homemade wooden handle. Marked near the back of ax are the words "(illegible) PATENTED ALEXANDRIA, IND. NOV. 18, 1899". The iron head is badly corroded, and the handle is cracked and weathered.

Members of the 1910 Sourdough Expedition used this ax when they carried firewood up onto Muldrow Glacier for fuel. The expedition members left the ax at a campsite two miles up Muldrow Glacier from McGonagall Pass. 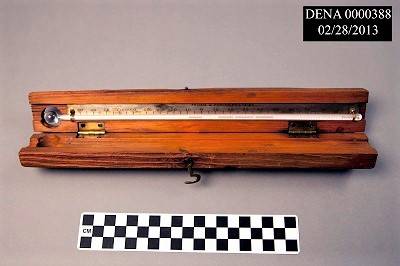 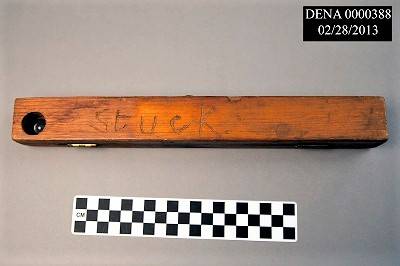 This is a glass thermometer mounted in a hinged wooden case. A metal strip is engraved with the words “No 11581 H.J. Green B'klyn, N.Y." The word “Stuck” is carved on the outside of the case. One side of case is badly worn, as if blasted by wind-driven snow.

Archbishop Hudson Stuck used this thermometer during the expedition to climb Denali in 1913 (the first climb to summit the south peak of Denali). It was left on the top of Karstens Ridge, and later recovered by the Lindley-Liek Expedition in 1932. When they found the thermometer, its minimum recording read below 95 degrees below zero.

For more information on the 1913 Expedition, check out these sites:
A Brief Account of the 1913 Climb of Denali
Denali Legacy: 100 Years On The Mountain 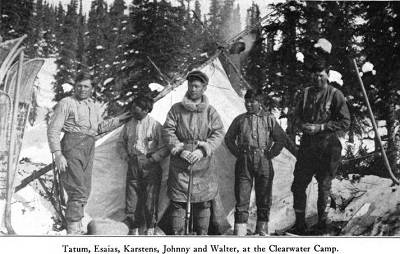 This photo shows the members of the 1913 expedition (minus Hudson Stuck). The caption reads “Tatum, Esaias, Karstens, Johnny and Walter at the Clearwater Camp.”

The five men are standing in front of a tent, with trees in the background. A pair of snowshoes is visible to the left. Karstens (center) holds a rifle.

The photo is a copy taken from Hudson Stuck’s 1914 book, The Ascent of Denali (Mount McKinley). 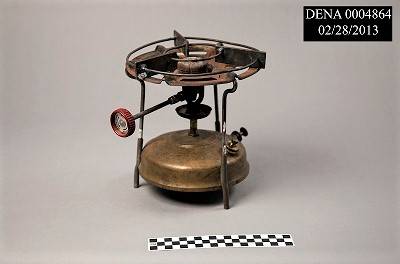 This is a portable gas stove with the model number “PRIMUS No 54”. The round fuel tank also functions as a base, and has three cylindrical feet welded to the sides. A control valve screws into the tank near the top. The burner sits on three balls. A homemade attachment sits on top of the burner.

Bradford Washburn used this stove on his 1947 Denali climb. He constructed the burner attachment to make the stove burn efficiently above 12,000 feet.

About Bradford Washburn: Washburn was one of the leading American mountaineers from the 1920s through the 1950s. He climbed Denali three times (1942, 1947, and 1951). The 1951 climb was the first ascent of Denali using the West Buttress route. His wife, Barbara Washburn, was the first woman to summit Denali (in 1947). Washburn also pioneered the use of aerial photography to map mountains in Alaska. In 1960, he published a topographical map of Denali. 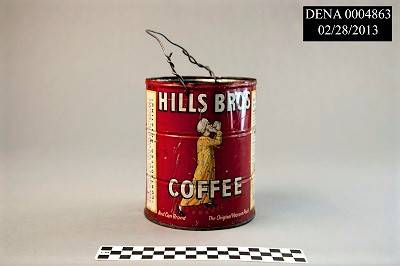 This is a Hill Bros. coffee can with a piece of baling wire as a handle. The can is red with white rectangular areas bordered in yellow. The wire is attached though two holes in the can, with the ends of the wire twisted to secure the handle.

Bradford Washburn used this coffee can as a cooking pot during his 1951 expedition (the first ascent of Denali using the West Buttress route).