In defense of scientific collections

The curator of birds at the University of Alaska Museum of the North has joined more than 120 colleagues to rebut a criticism of scientific collecting published in the journal Science in April.

Kevin Winker said the reaction to the critique was extremely fast. “Email connects scientists around the world, enabling rapid communication, and the museum community is made up of people eager to work together to advance science.”

The response is published in the May 23 issue of Science, the academic journal of the American Association for the Advancement of Science and one of the world’s top scientific journals. Science is published weekly.

The authors of the original piece concluded that collecting voucher specimens, the scientific practice of preserving a complete animal that serves as a basis of study and is retained as a reference, is potentially harmful to many species. The authors also stated that technological alternatives now exist in the form of photographs, audio recordings and non-lethal tissue sampling. 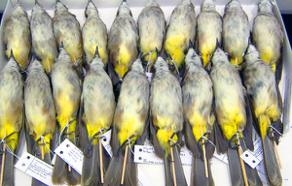 Winker and his colleagues asserted that none of the extinction events in the original paper could be attributed to scientific collecting. They explained that the suggested alternatives to specimens are individually problematic and cannot be used to identify the majority of the plants and animals that make up the planet’s biodiversity.

“Outside of traditional uses in biodiversity science, we benefit from the uses of specimens in diverse ways, from the study of zoonotic diseases and pathogens, to environmental contaminants, to important shifts in ecosystems and food chains,” Winker said. “As the environments we live in change, these benefits are only going to grow in frequency and importance —»as long as we have the specimens to study, sampled through time.”

Luiz Rocha with the California Academy of Sciences, the lead author of the Science piece titled “Specimen collection: An essential tool,” said “photographs and audio recordings can’t tell you anything about a species’ diet, how and where it breeds, how quickly it grows, or its lifespan — information that’s critical to assessing extinction risk, and vital for IUCN Red List designation.”

The International Union for Conservation of Nature is tasked with keeping the most comprehensive register of names and threat categories for the world’s plant and animal species. The categories range from Not Evaluated (NE) to Endangered (EN) and, ultimately, Extinct (EX).

Winker wrote a blog post over the weekend following the Science publication and was surprised by its reception. “That post received over 2,500 views in its first 24 hours. That’s a lot for our quiet corner of the world. As of today, the share buttons indicate 938 on Facebook and 154 on Twitter. Other blog sites are now linking to it, too.”

Winker also received scores of emails in support of the museum response. “Social media clearly make us and our work more accessible, and we’ll continue to use it. It’s easy for scientists to hold conversations among ourselves, but this platform provides a window into those conversations that makes them much more accessible to an interested public.”