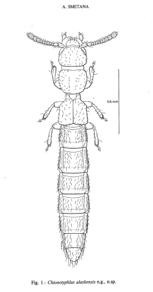 AUGUST 2014 - Curator of Insects Derek Sikes says this summer has brought an exciting addition to the collection, a rare beetle found only in Interior Alaska.

Chionotyphlus alaskensis»is a tiny, blind beetle first documented in 1976. It hasn’t officially been found anywhere else except Fairbanks, Nenana, and Chatanika.

Until recently, the museum didn’t have a sample among the 2,500 insect species in the collection.»“I felt almost embarrassed, frustrated that I hadn’t found it yet,” Sikes said.»

Sikes became insect curator at the museum in 2006. He has searched unsuccessfully for the beetles over the last few summers. In August 2014, he found two adults and a larva on a south-facing aspen slope in the Fairbanks area.»

"I’ve known about this species since I arrived here in 2006," Sikes says, "but despite various efforts, hadn’t found it until I got lucky this year."

An illustration of the beetle from the original publication by Ales Smetana is shown here. Sikes loosely translates the beetle’s Greek scientific name as “blind, snow-loving Alaska thing.”

They’re hard to find because they’re less than two-millimeters long and because they live in soil below the top layer of organic matter called the “leaf litter,” he said.»

They have six short legs, but they move more like worms by extending and contracting their bodies.»Not much is known about the»Chionotyphlus alaskensis’ lifecycle except that it eats even smaller invertebrates like springtail and very small mites.» 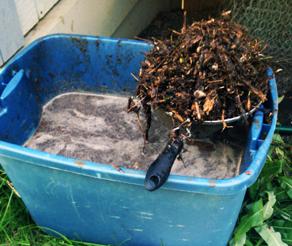 Since the insects are so small, researchers must go to extraordinary lengths to extract the beetles from the soil. The first step is to wash the dirt and leaves in water, letting all the organic matter float to the top (photo at left). The organic material is then put into a Berlese funnel with a light bulb heating the matter to drive the small organisms into a collection bag underneath (photo below).

The two adult beetles and the larva have been added to the museums collection, although they pobably won't be put on exhibit because they’re so tiny.»

The larva may be the subject of further study, though. Alfred Newton, a visiting curator from the Field Museum of Natural History in Chicago, recently confirmed that it was a Chionotyphlus alaskensis»larva.

“Prior efforts to collect the larva had failed so this was an exciting find,” Sikes said.»

This tiny (less than 2 millimeters long), blind, and flightless beetle lives in the soil below the leaf litter among the roots of plants. It’s a species and genus that is known only from Fairbanks, Nenana, and Chatanika and is thus an Alaskan endemic. That means, as far as anyone knows, it is not found anywhere else in the world.

The beetle was first described in 1986 under the name»Chionotyphlus alaskensis»and is presumed to be a»tertiary relict.»That means it has survived due to the lack of glaciers in much of Alaska during the Pleistocene Era.

You can learn more about the»museum’s insect collection»and visit the museum's online database.