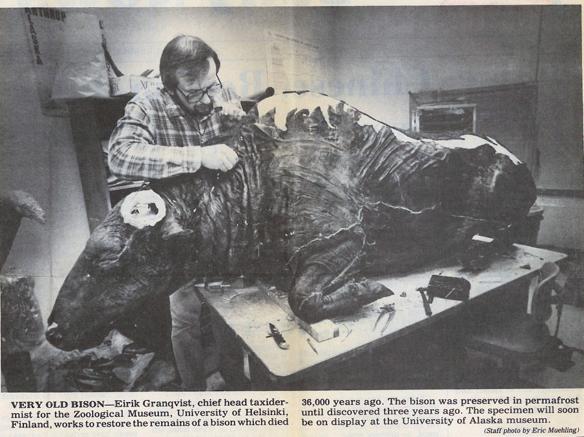 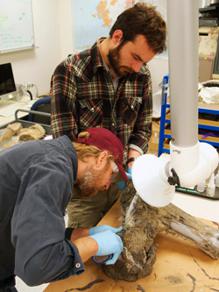 JULY 2014 - It’s been 30 years since the UA Museum of the North unveiled a startling display in the Gallery of Alaska. Blue Babe, a 36,000 year-old mummified Alaska steppe bison, had been preserved in the Interior permafrost since the Ice Age. Gold miners discovered the specimen in 1979 and donated it to the museum.

Collagen from the animal’s well-preserved skin was originally dated to 36,000 years ago in the 1980s. But that number will soon be a much more precise understanding of this celebrated specimen.

The UAMN Earth Sciences and Archaeology Departments are collaborating with the Center for Applied Isotope Studies at the University of Georgia to radiocarbon date samples from Blue Babe. CAIS is analyzing hide, hair and bone collagen from those samples with the most recent state-of-the-art techniques using an accelerator mass spectrometer. AMS radiocarbon dating provides more precise and potentially older age estimates than earlier methods in use during the 1980s.

The animal gets its name from the mineral vivianite that formed on the skin when the body reacted with the minerals in the silt during its long burial. The nickname is also a tongue-in-cheek reference to Paul Bunyan’s giant blue ox.

The gold miners were using a hydraulic hose to melt the frozen muck when they uncovered the bison’s skull. They immediately contacted the university, where scientists were able to piece together the story of what happened to Blue Babe, thanks to the clues exposed along with the melting permafrost. 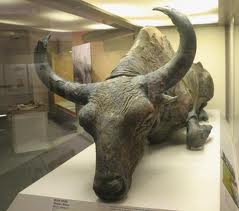 Claw marks on the rear of the carcass and tooth punctures in the skin indicate that the bison was killed by an Ice Age American lion. The bison appears to have died during the fall or winter, when it was relatively cold. The carcass probably cooled rapidly and soon froze, which made it difficult for scavengers to eat.

Several years after the bison was discovered, a taxidermist from Finland arrived in Fairbanks to restore the specimen for exhibit. After treating and tanning the skin, he constructed a foundation to mount it on. The skull and bones have been preserved as part of the museum’s earth sciences collection.

Even 30 years later, the bison is a rare specimen. Blue Babe is the only known display in the world of a Pleistocene bison recovered from permafrost.

The museum recently received»an additional steppe bison specimen, known as Bison Bob. It was discovered in the summer of 2012 in the thawing bank of a northern river. Earth Sciences Curator»Pat Druckenmiller»says it is probably the most complete specimen of any Ice Age mammal ever found in Alaska. It is only missing a single shoulder blade.

From the caption of the photo above, printed in the April 27, 1984 edition of the Fairbanks Daily News-Miner:»VERY OLD BISON - Eirik Granqvist, chief head taxidermist for the Zoological Museum, University of Helsinski, Finland, works to restore the remains of a bison which died 36,000 years ago. The bison was preserved in permafrost until discovered three years ago. The specimen will soon be on display at the University of Alaska’s museum.