The fish that fell from the sky 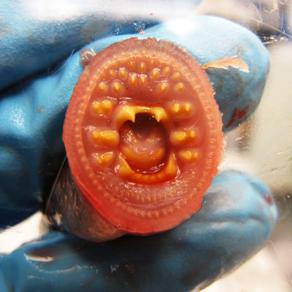 Fairbanksans were surprised last summer by a rain of lampreys falling from the sky. It wasn’t just that fish were dropping onto parking lots and lawns in front of houses. The sight of the lampreys caused a stir because many people had never seen anything like them before.

Lampreys are unique. They are eel-like fish with long, thin, silvery bodies. Their mouths carry a special surprise. Teeth! Lots of tiny, sharp teeth arranged in a circular orbit. But no jaws.

Lampreys belong to a lineage of jawless fishes with teeth arranged into a funnel-like spiral adapted to help the animals attach to their prey. That’s how adult lampreys eat. They latch onto other fish and marine mammals to feed on flesh and bodily fluids.

When the calls started coming into the Alaska Department of Fish and Game last summer, biologists surmised that the fish had fallen out of the mouths of hungry birds taking advantage of a swarm of lampreys returning to the Chena River to lay their eggs.

These specimens were donated to the University of Alaska Museum of the North, where Curator Andres Lopez was already involved with several projects involving lampreys. He is working with undergraduate, graduate and faculty researchers across a variety of units on campus to learn more about the complex life cycles of lampreys.

“Arctic lampreys lead a very interesting life that shares key traits with the more familiar salmon,” he said. “Compared to salmon, however, they go through a much more radical set of changes that take them from hatching to getting back to the river to spawn and die.”

Lopez finds the fish fascinating for many reasons. Unchanged for nearly half a billion years, it's a genuine living fossil. "It's a jawless vertebrate," he said. "It has a spinal cord, but no skeleton. Just cartilage. Its teeth are not real teeth, but keratin, more like your fingernails."

Their life cycle is very similar to salmon. The young are blind and don't have the trademark ring of teeth. They bury themselves tail first into the mud and filter feed on whatever the water brings them, more like barnacles than fish.

Maturity can be anywhere between one and three years. Scientists aren't certain, Lopez said, but it probably varies depending on local conditions. They grow eyes and their bizarre mouth structure and otherwise transform into adults.

Some reach the ocean and attach to other fish, using their ring of lip and hooked teeth to hang on like a suction cup. And then they eat.

"They have something similar to a tongue with teeth on it, sharp plates," Lopez said. "They rasp into the fish and create a wound. Some are like vampires and rasp until the fish bleeds into their mouths."

"One of my students is currently studying stomach contents," Lopez said. "She's finding some pretty meaningful chunks of fish. Intestines, fins, vertebrae. They can cause a lot of damage to whatever they're feeding on."

There are two different variations of the arctic lamprey. Those that go to sea and return. Another group stays in freshwater.

Some of the Arctic lampreys found in Fairbanks are anadromous. They spend a big part of their lives at sea, but return to fresh water to spawn. Adult females can release up to 100,000 eggs at a time. Baby lampreys are born without the vampirish teeth and mouths of their parents. It takes up to seven years before they develop as adults and the fish can grow up to 15 inches long.

Not much is known about lampreys because they spend so much of their life out of sight. They generally carry a smaller economic and cultural value compared to other, more visible or valuable fish species. While lampreys aren’t a large-scale commercial resource, they are a subsistence species and play a vital role in maintaining the health of aquatic ecosystems.»

»As for those jaws!» The lamprey's suction-cup mouth only works on a smooth surface, like a rock or the side of salmon. Humans shouldn't have to worry about them in local water s, either. "The adults stop feeding when they come into freshwater," Lopez said.

Museum Research - In the Media

What we know about lampreys (Alaska Dispatch News, July 7, 2016)