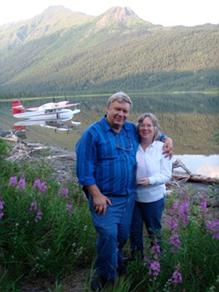 SEPTEMBER 2014 -- A $1 million personal gift from longtime University of Alaska Fairbanks supporters Joe Usibelli and Peggy Shumaker will allow work to begin on renovations to the university museum’s oldest gallery.

The donation will allow the University of Alaska Museum of the North to begin work on a $5 million upgrade of»the Gallery of Alaska, which was built in 1980 and is the only portion of the museum that was not updated during an expansion completed in 2005.

“Joe and Peggy have been generous supporters of both the museum and the University of Alaska Fairbanks,” said museum director Aldona Jonaitis. “Soon, Otto, the brown bear; Blue Babe, the 36,000-year-old mummified Alaska steppe bison; and other treasures will be exhibited in a state-of-the-art, family-friendly space.”

The renovation project is slated to take place in five phases, which will allow the gallery to remain open to visitors. The gift from Usibelli and Shumaker creates the foundation for the project and its fundraising campaign. When complete, the Peggy Shumaker and Joe Usibelli Gallery of Alaska will have modern lighting and displays that will protect artifacts, along with hands-on elements to make the exhibits an interactive experience for visitors of all ages.

“The Alaska Gallery is part of our home. We make this donation to help create exhibits that protect the fragile and priceless objects on display,” noted Shumaker and Usibelli. “We support this fresh Alaska-built gallery that will tell many stories — for Alaskans and for visitors from around the globe. We invite all Alaskans to join us in presenting to the world our Alaskan legacy.” 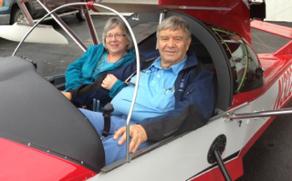 Usibelli and Shumaker have a longstanding affinity to the university. Usibelli is a 1959 alumnus and served on the museum’s advisory committee during the campaign that raised more than $19 million for the expansion project. Shumaker is a former Alaska Writer Laureate and a professor emerita at UAF. The couple received the 2013 Association of Fundraising Professionals’ Eugene R. Wilson Outstanding Philanthropist of the Year award. Prior to this gift, the family has donated more than $4 million to the university via personal, corporate and Usibelli Foundation gifts. The Usibelli family and corporation have also created five endowments to promote student and faculty excellence at UAF.

“This gift, and Joe and Peggy’s ongoing support of the university, is a testament to the power of individual philanthropy and engagement,” said UAF Chancellor Brian Rogers. “Our strength is in our people: the individuals who give their time, influence and resources to ensure a vibrant university now and in the future.”