The University of Alaska Museum of the North has received a $360,000 grant from the National Endowment for the Humanities to support the renovation of the historic Gallery of Alaska. The funding will allow the museum to hire an anthropologist, who will visit Native communities to solicit their input into the gallery project, as well as consult with a team of humanities scholars. 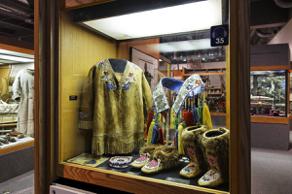 The gallery was built in in 1980 and is the only public portion of the museum that was not updated during an expansion completed in 2005. The museum, under the leadership of Director Aldona Jonaitis, launched the Gallery of Alaska project in 2014. The curators and staff worked to identify interpretive themes and catalog the objects currently on display. Most recently, the team finished an interpretive plan for the new gallery and is currently working on the layout and design of more than 70 exhibits.

The uniting theme for the new gallery is the bond between the landscape and the changing nature of life in Alaska and the North. Jonaitis said Alaska’s land and life are profoundly connected. “The land has meaning—both philosophical and practical—for all Alaskans. In turn, Alaska’s life shapes this land. This theme has universal relevance, as everyone, interacts with their own environment.”

The project is estimated to cost $3.75 million. A lead gift of $1 million by longtime museum supporters Joe Usibelli and Peggy Shumaker was previously announced. Another $500,000 has been raised from individuals. Current efforts include several pending six-figure requests to local and regional foundations and corporations. A public fundraising phase offering several naming opportunities in the gallery will be announced in 2018.

CONTACT: Morgan Dulian, UAMN Director of Development, at 907-474-5484 or via email at madulian@alaska.edu.