In the 1950s, archaeologist Wilbert Carter and his crew traveled to one of the northern most regions in Alaska with the purpose of excavating, studying, and piecing together the sequence of pre-Thule cultures. They focused archaeological excavations at the Birnirk Site and uncovered four distinct components, Birnirk (the Birnirk Site is the type-site for the Birnirk Culture), Thule, Late Prehistoric, and Early Contact. Over 20,000 artifacts were recovered and used to provide invaluable insights into the lives of ancient Alaskans.

Known by archaeologists since the early 1900s, sites in the Barrow area were visited only a couple times before Carter, sponsored by the Office of Naval Research, conducted his multi-year excavation at Birnirk. The site is composed of nineteen mounds, usually made of one or more ancient sod houses, meat caches, and cultural debris. The layered houses indicate that Birnirk is a multi-component site, representing Birnirk, Thule, Late Prehistoric, and Early Contact periods. 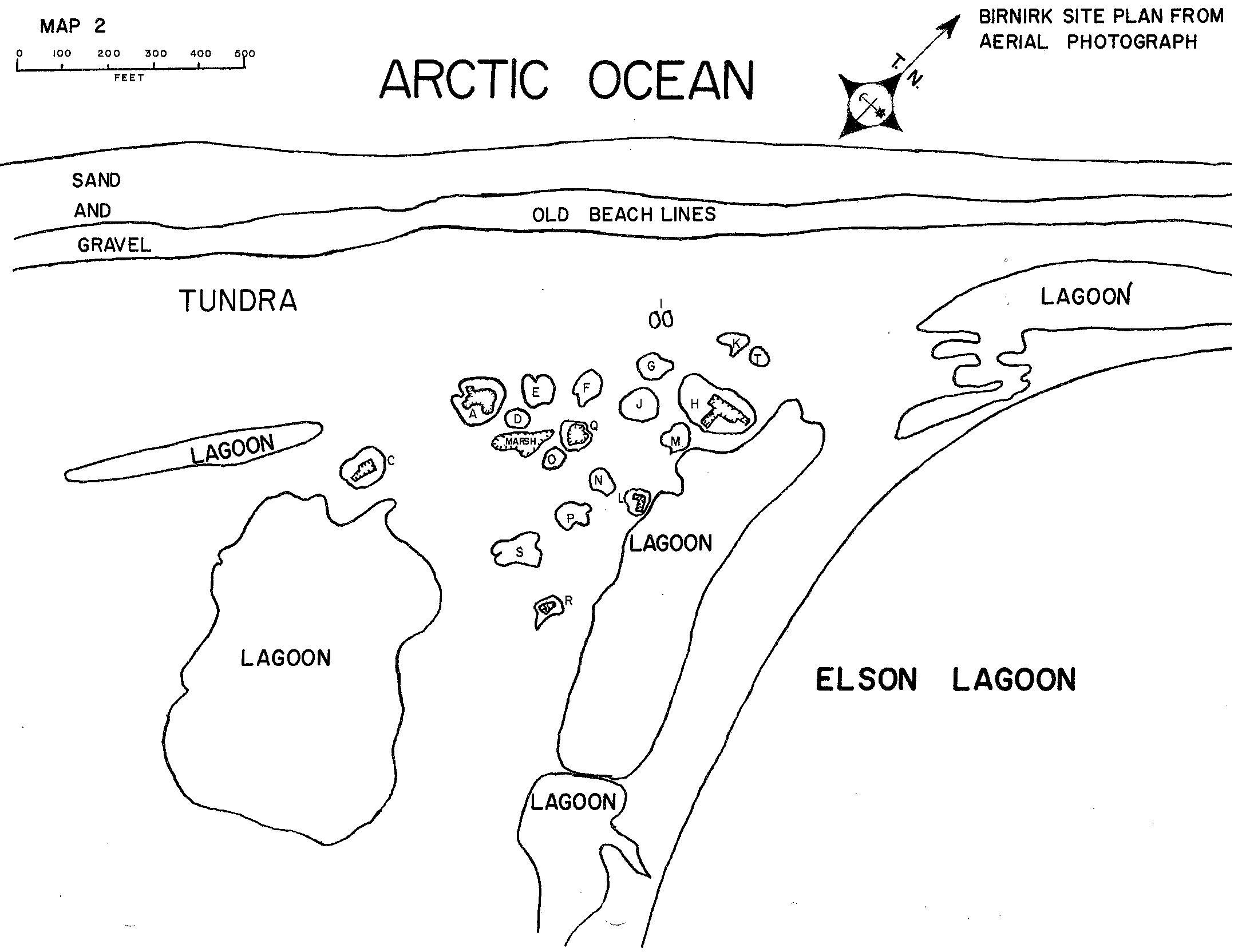 Overall the Birnirk populations were few and far between making a full reconstruction of the culture as whole and their dispersal difficult (Mason 1998). Adding to the problem, many Birnirk period archaeological sites likely have been eroded away by changing coastlines. The few Birnirk period sites that are known indicate the culture arose around 600 A.D. along the Chukotka coast and spread west to northern Alaska (Mason 1998).

Like many other ancient arctic people, the Birnirk people lived in semi-subterranean houses with sod walls held up by driftwood and/or whale bones (Carter 1954). Houses were generally one room, but at the Birnirk site one house was found with four to five rooms connected by tunnels. For heat and light, small seal or whale oil lamps were used (Carter 1960).

Carter counted and identified over 11,000 animal bones from Mound Q to determine which animals were being exploited for food. A large majority of the bones, around 5,400, represented seal species, which were followed in quantity distantly by caribou, duck, and whale remains, respectively (Carter 1953). »Inferences for subsistence can also be made from hunting gear that was collected. Harpoon parts, nets, sinkers, and baleen line indicate the people were hunting seals and possibly walrus. The abundance of bola weights suggest that birds were also an important food source. Whale bones that were used for house frames and other large structures/implements could be the result of either active hunting or scavenging from whale carcasses; no hunting weapons directly attributed to hunting whales have yet to be identified from the Birnirk collection (Mason 1998).

Each pre-Thule period has a unique art style which aids archaeologists in identifying a cultural affiliation. The most common Birnirk motif is of straight or curved lines that converge and diverge. The “star motif” is also fairly common (Carter 1966). Carter (1966) describes the form of Birnirk materials as being “…smooth flowing lines with overall shapes determined by an apparent effort to achieve harmony between form and utility”. The most commonly decorated items from Birnirk include needle cases and meat forks (see figure). Several Old Bering Sea (OBS) style decorations have been found mixed within the Birnirk cultural layer, as well (Carter 1966). The presence of OBS artifacts, which generally date between 0 and 800 A.D., may indicate reuse of found objects, trade, or the presence of OBS people at site.

Intricate lines in bone and ivory were achieved using iron engraving tools. The presence of iron remains somewhat of a mystery since European traders had yet to travel to Alaska during the Birnirk time period. Iron could have been traded through Asia (Carter 1958).

Personal adornment items found within the Birnirk component include toggles, buttons, and pendants. Ivory toggles, or belt fasteners, were often in the shape of animals or animal heads. Pendants and amulets were made from a variety of materials and are represented in many different forms including chains and teeth. Perforated polar canines were commonly used as pendants during the Birnirk period through the Thule period.

Traveling was imperative to ancient Alaskans, as they had to follow important subsistence resources, which either meant moving camp or traveling various distances to hunt and fish. The Birnirk people used triangular baleen toboggans to pull supplies and food from one location to another. Ivory sled runners indicate that sleds were used, though they probably were not pulled by dogs. Kayaks and umiaks were needed for hunting in the ocean and traveling along the coast.

Many items relating to day-to-day life were uncovered at the Birnirk Site. Pottery fragments were fairly common. Carter (1959) and Ford (1959) classified the pottery fragments as either belonging to pointed bottom pots or shallow lamps. Pottery paddles were used to decorate the vessels, usually with circular designs. Scorched and soot covered pottery sherds indicate that the pots were used mainly for cooking (Ford 1959).

An assortment of knives was found within the Birnirk component. Ground slate ulu blades with wooden handles were used for cutting meat. Knives with stone or metal blades were also used to decorate and shape various materials. Adzes were used for carving into wood and are usually made of curved wooden or horn handles with a stone head.

Birnirk period toys were often miniature versions of the actual size items that may have been made by adults for the purpose of entertaining and teaching children. Birnirk period toys are commonly made of bark, stone, and baleen (Carter 1966). Examples include: bark dolls, small baleen bows, stone fish, and bark boats. Game pieces, such as the flat pillow-shaped bone or baleen dice were used for entertainment especially in the winter months.»

The artifacts collected by Carter remained in the Peabody Museum at Harvard until 2011. After more than 50 years the Department of Naval Research paid to transport and incorporate the 20,000 specimens into UAMN’s archaeology collection. Due to the size of the collection this has become a multi-year process. Each item has to be unpacked, inventoried, cataloged, housed in archival material, and sorted.

Carter’s collection is unique in that the artifacts were preserved in permafrost. Though difficult to excavate, the permafrost kept many of the items in pristine condition and preserved materials that usually decay within a few years. For example baleen, hide, hair, gut, shell, wood, and bone are abundant at the site but fairly rare in Alaska’s archaeological record. Overall, the artifacts recovered from Birnirk during Carter’s excavation are invaluable in increasing our knowledge of pre-Thule cultures.