Arctic Archaeology and the Importance of Harpoon Heads

Harpoon heads play an important role in arctic archaeology and one significant research focus has been their morphology, or shape. Before the development and advancement of radiocarbon dating, a strategy used two methods called stratigraphic superposition and seriation to date sites based on the morphology of harpoon heads. The depths at which different harpoon heads were found in the ground was an important aspect in the creation of these relative chronologies- the deepest harpoon head types being the oldest and the shallowest being youngest.  A major issue that arose from this technique was the notion that different types of harpoon heads correspond with a specific group of people, or that different harpoon head attributes could be associated with a specific cultural group. This is a difficult interpretation to make because it takes contemporary observations of a static object and infers cultural boundaries from it.

Typologies are important because they represent the categorization of morphological attributes that are observed on artifacts. This allows for a systematic and replicable analysis of artifacts from a large area of sites. The typology used was developed by Henry Bascom Collins, Jr., in 1929 and based on collections from his excavations near Gambell on St. Lawrence Island from 1928 to 1939. His classification emphasizes changes in the decorative styles and morphological characteristics of toggling harpoon heads. Collins used six morphological features: the foreshaft socket, lashing slot(s) or notch, spur, line hole, presence or absence of lateral barbs or stone blade insets, and presence or absence of an end blade slot (Figure 1). On top of these attributes he created a list of decorative styles which is based on the presence or absence of lines, circles, and dots. Below is some pictures of harpoon heads that show the different attributes and how they differentiate between types. 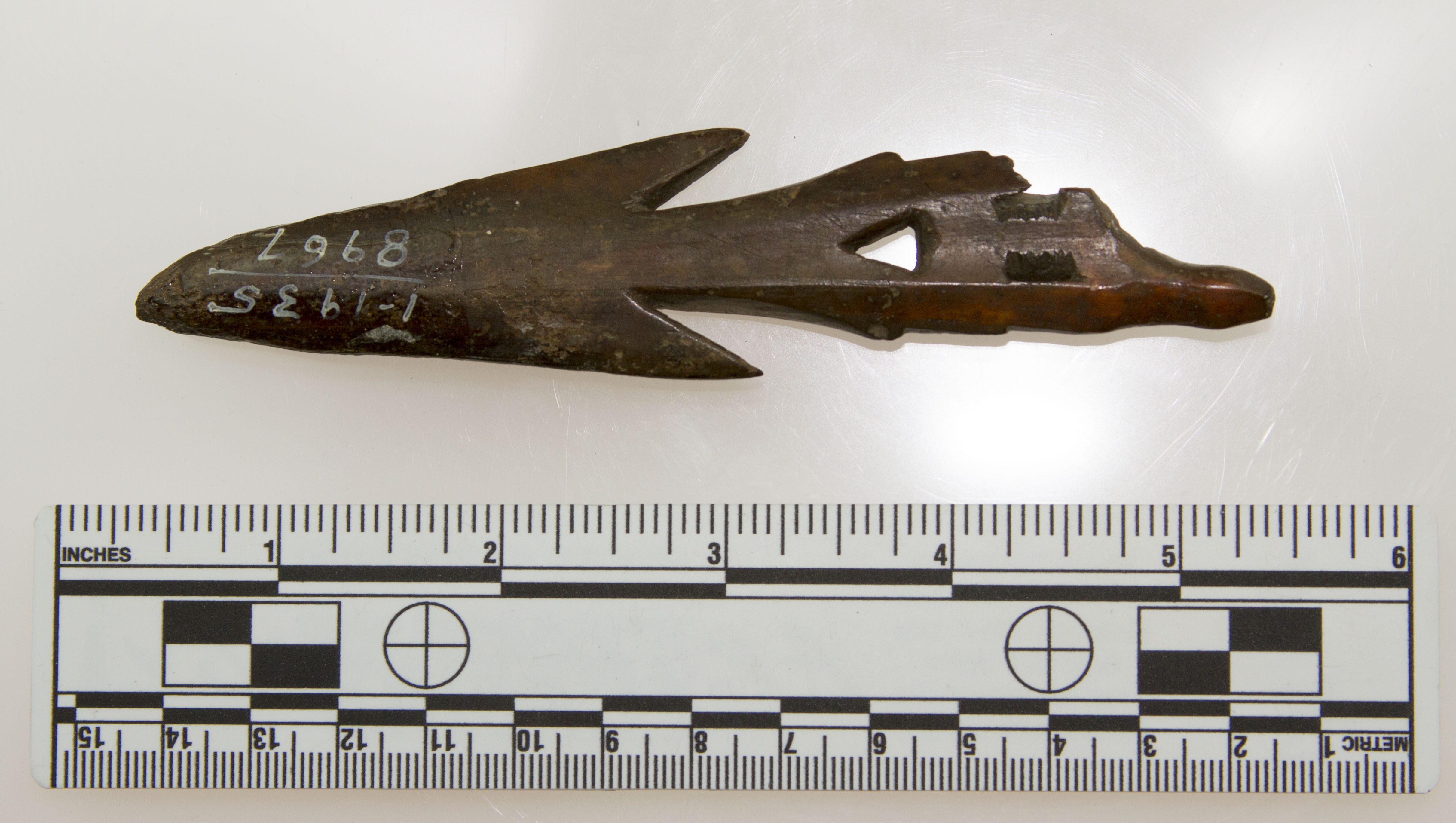 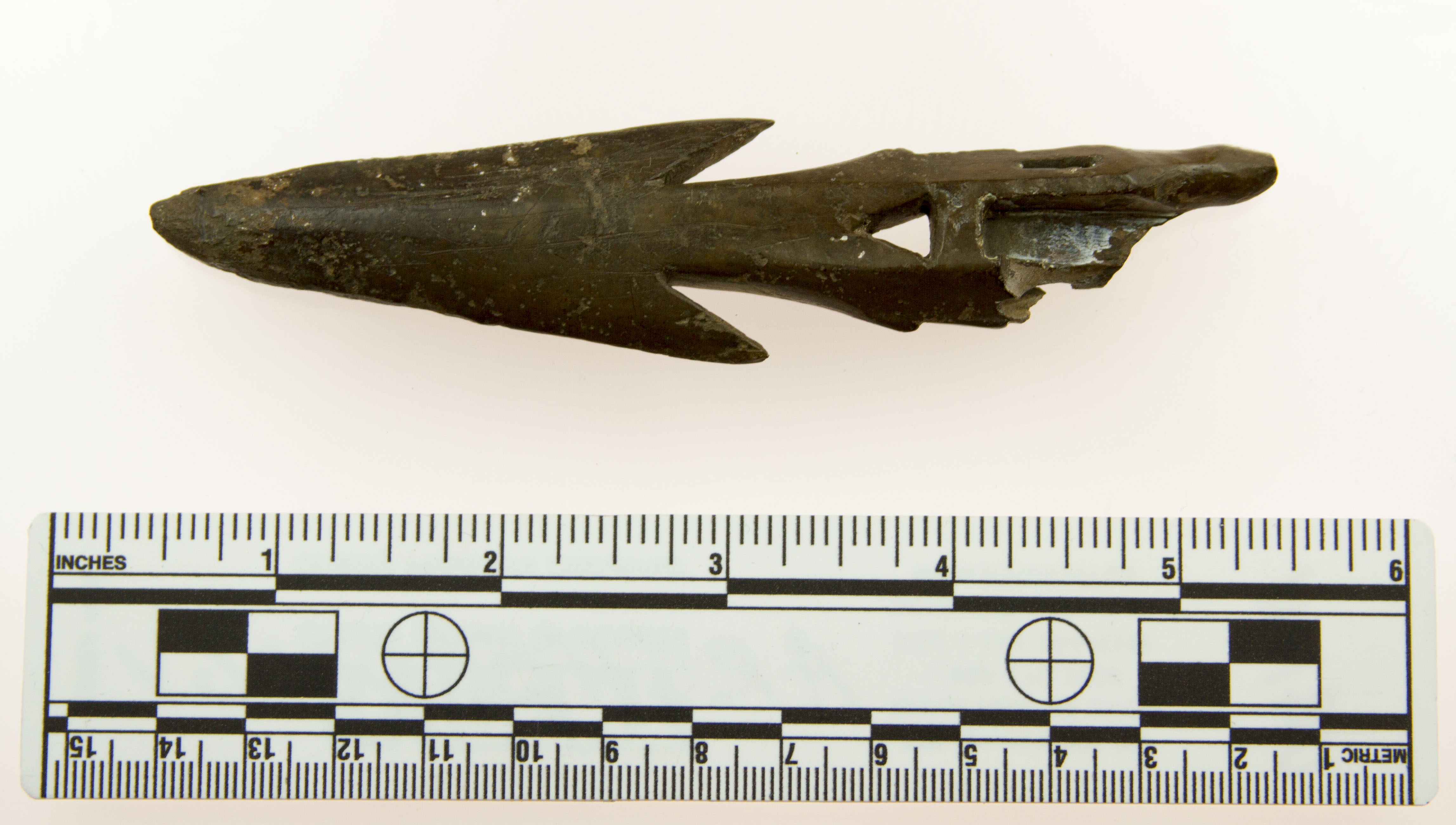 Figure 2: Punuk Type 4 harpoon head without any decoration (UA1-1935-8967). This harpoon head is classified as a Punuk Type 4 because it has a single spur that goes off to the right,two individual slots for lashing , a drilled triangular line hole, and it does not have side blades but distinctive barbs on both sides.

Figure 3: Old Bering Sea Type Iy harpoon head with Old Bering Sea style 1 decoration (UA1-1934-1596). Classified as Old Bering Sea Type I because it has a trifurcated spur (one of which has broken off), two lashing slots, two drilled line holes, and the holes for two side blades coming out at a right angle. This orientation of the side blades is what gives the type the “y” categorization. It was given the style Old Bering Sea 1 because of its simple, lightly incised lines, with minor converging lines. 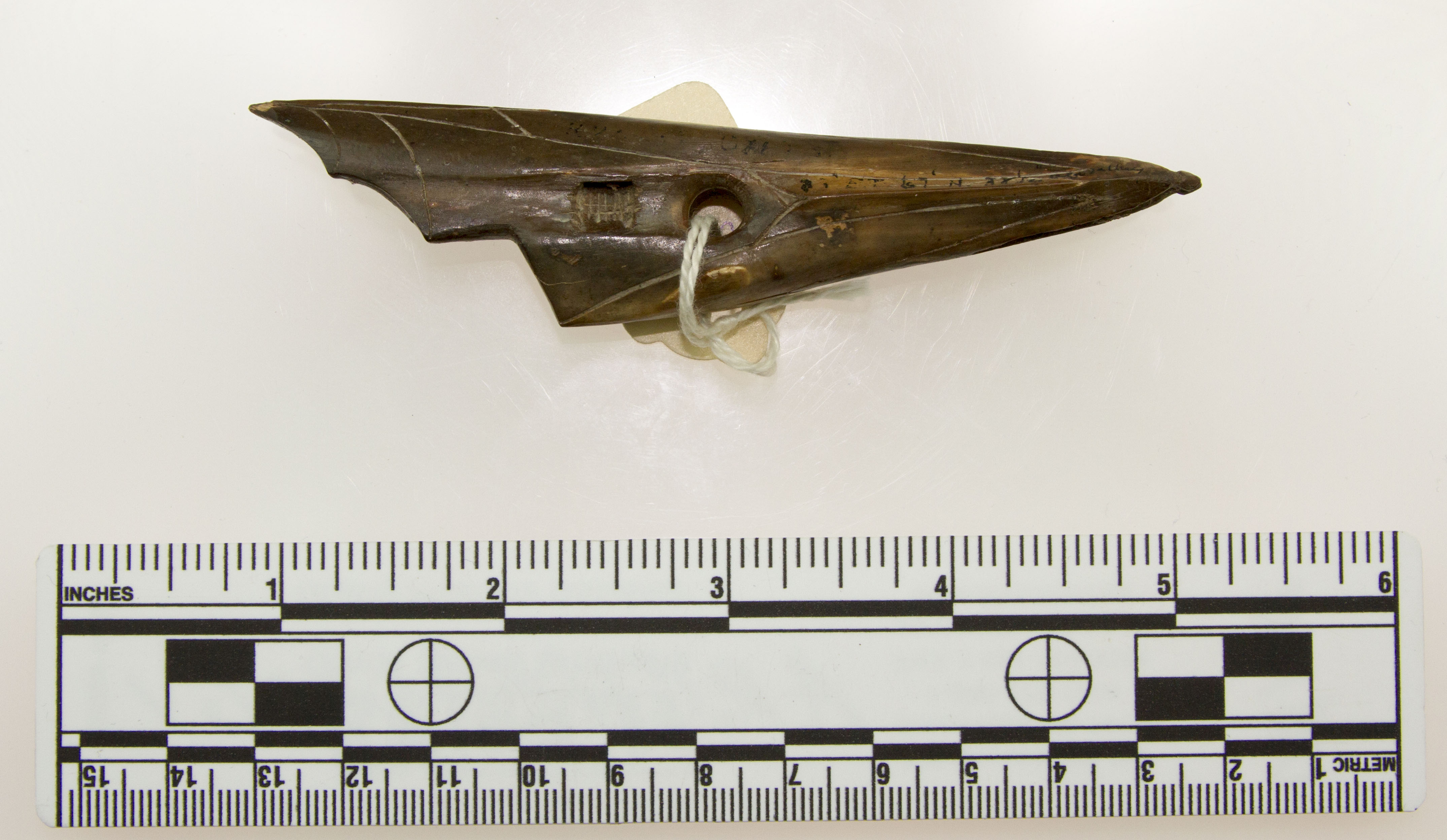 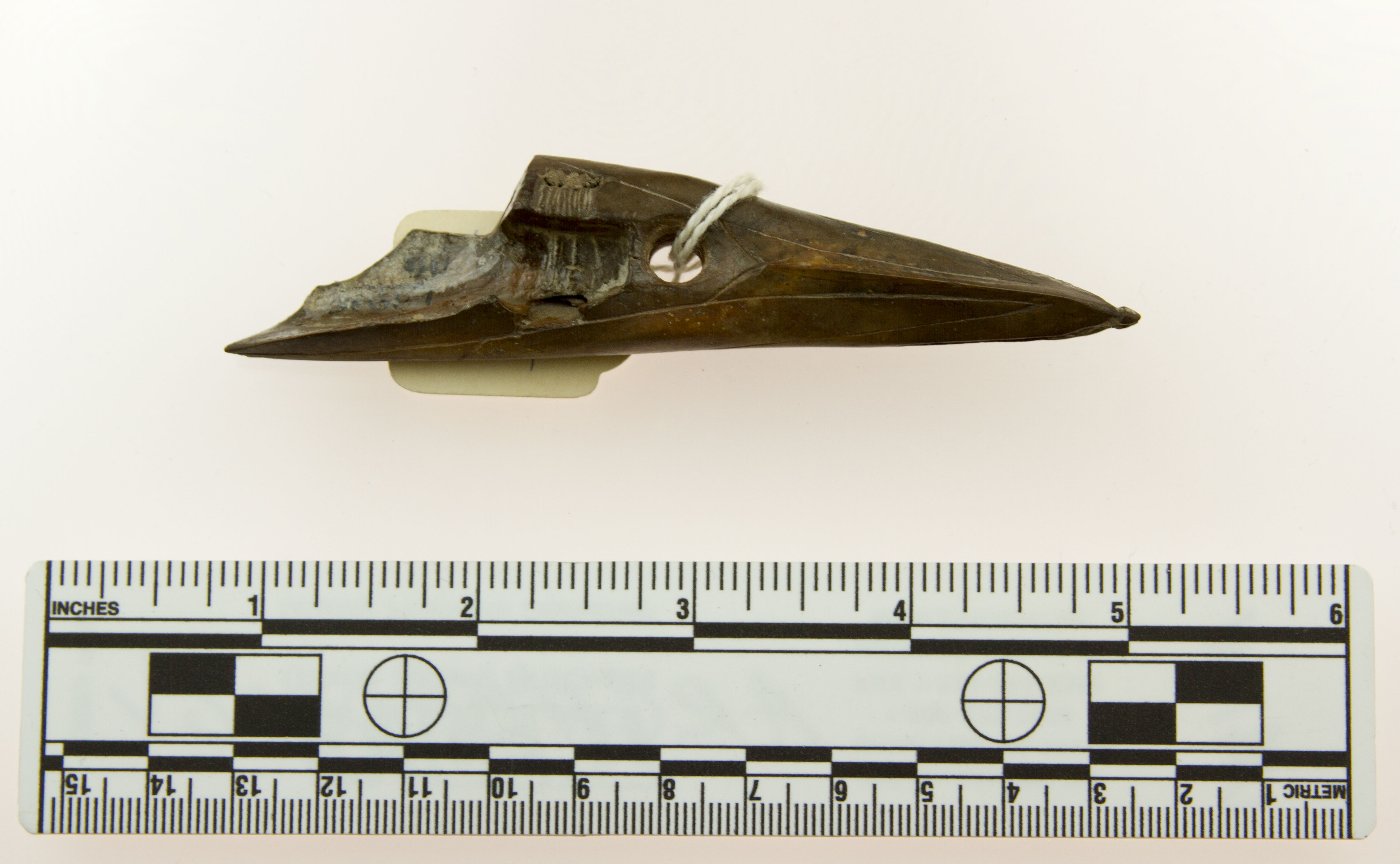 Figure 4: Old Bering Sea Type IIIy with Punuk Style 1 Phase 1 decoration (UA1-1935-0116). Classified as Old Bering Sea Type III because of its single spur, two lashing slots, single drilled line hole, and end blade that is at a right angle from the line hole. This remains constant with the use of “y” but with the end blade instead of the side blades. The decoration is Punuk Style 1 Phase 1 because of basic simple line decoration, no dots, and no circles. 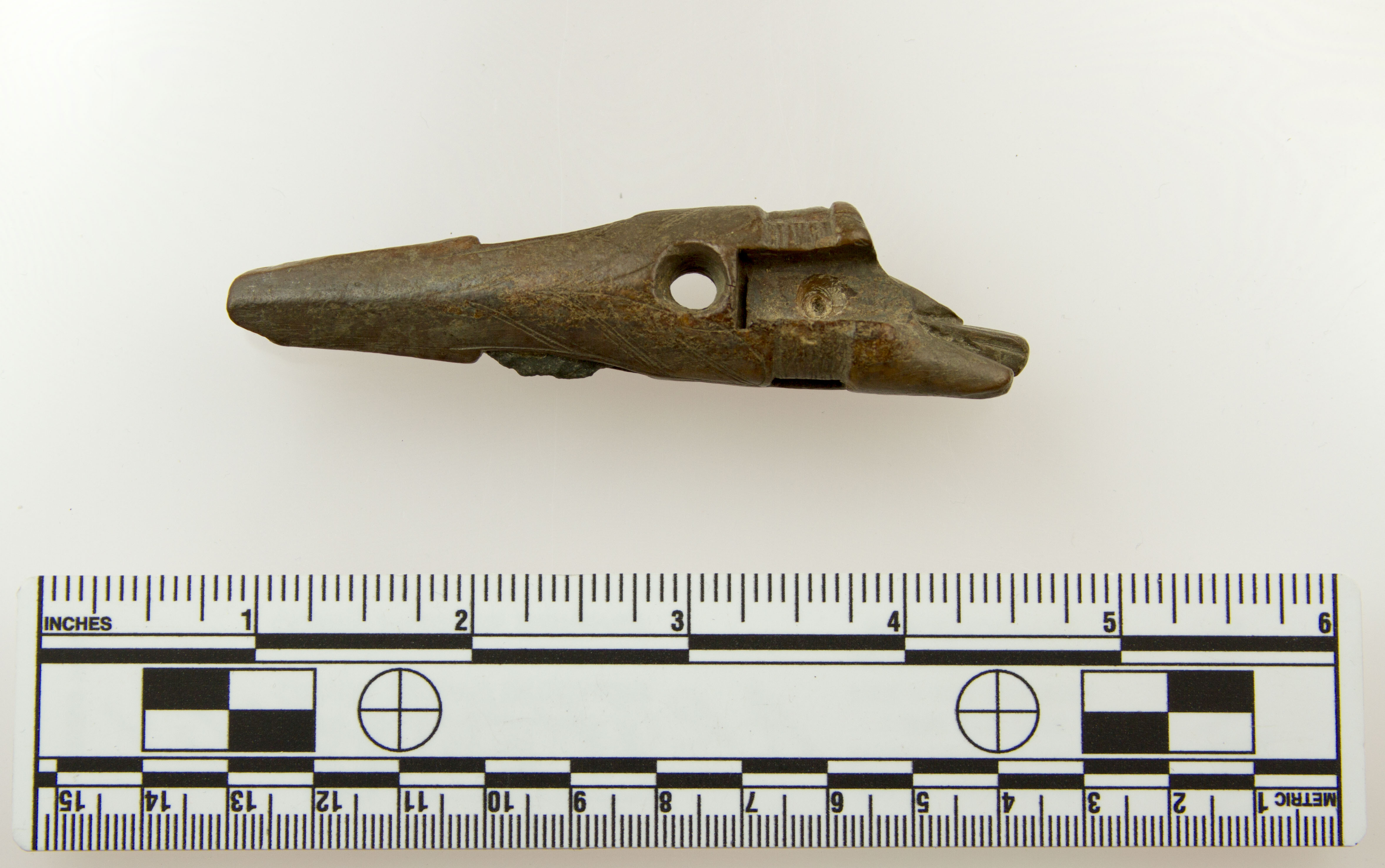 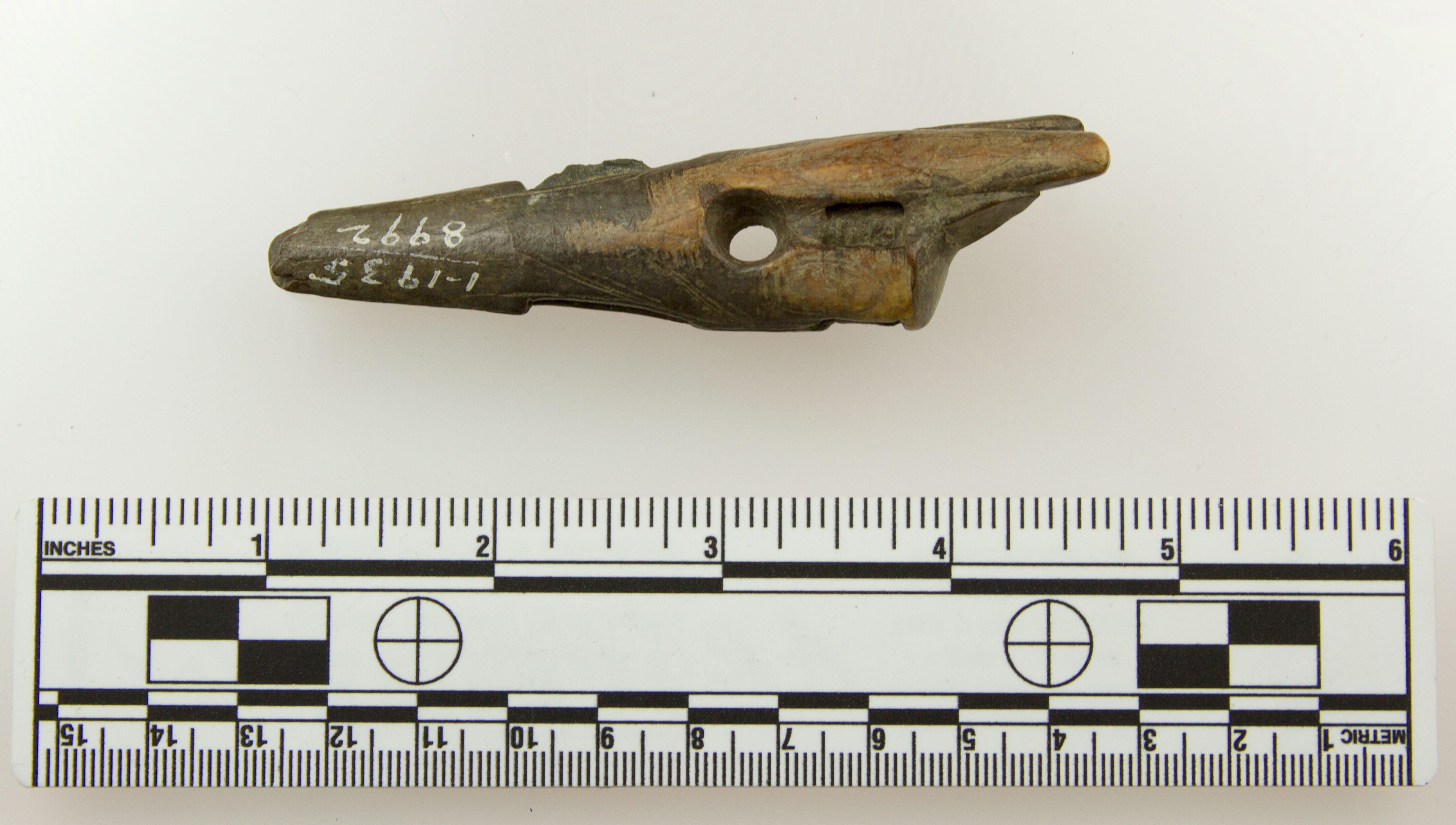 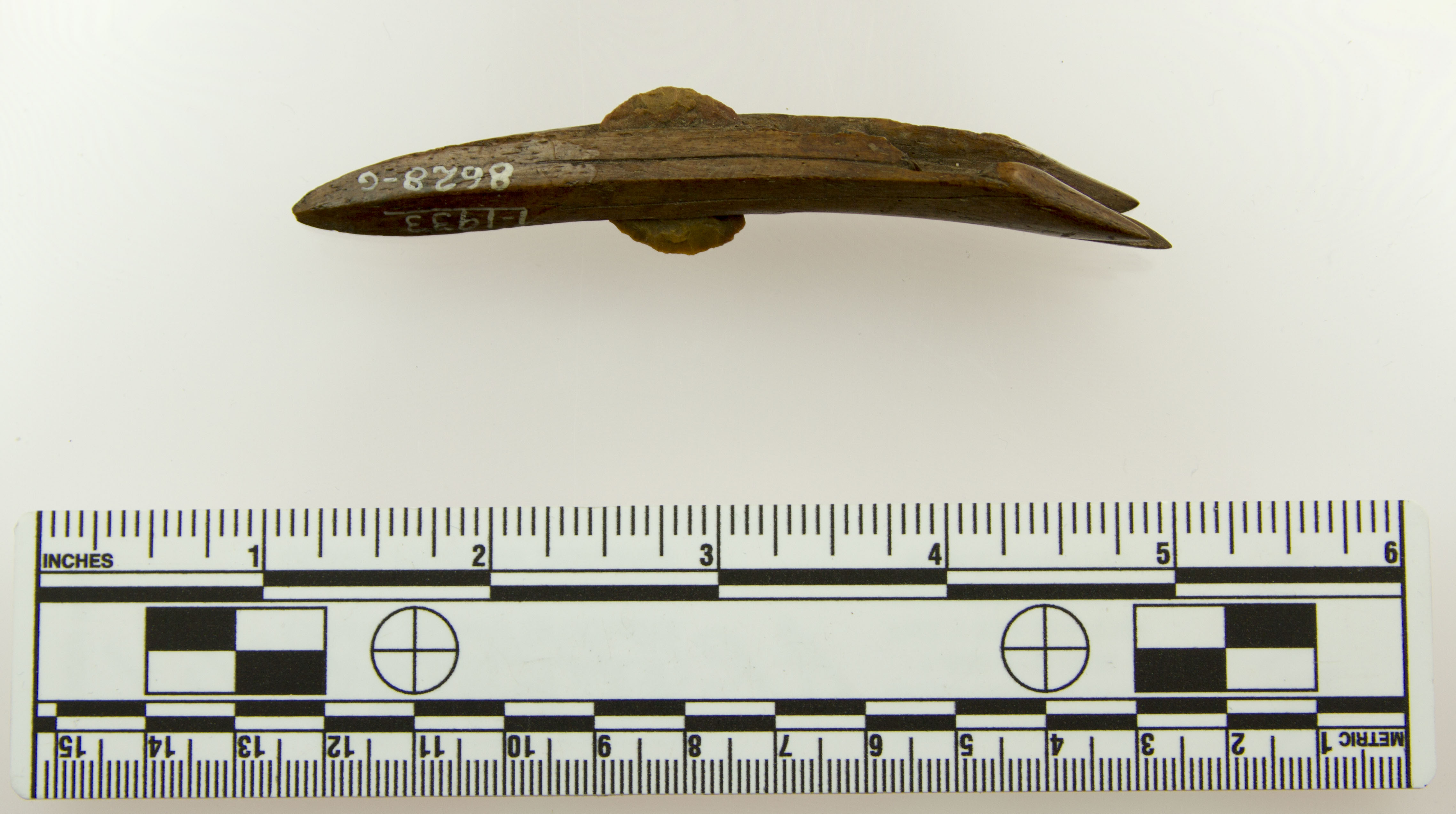 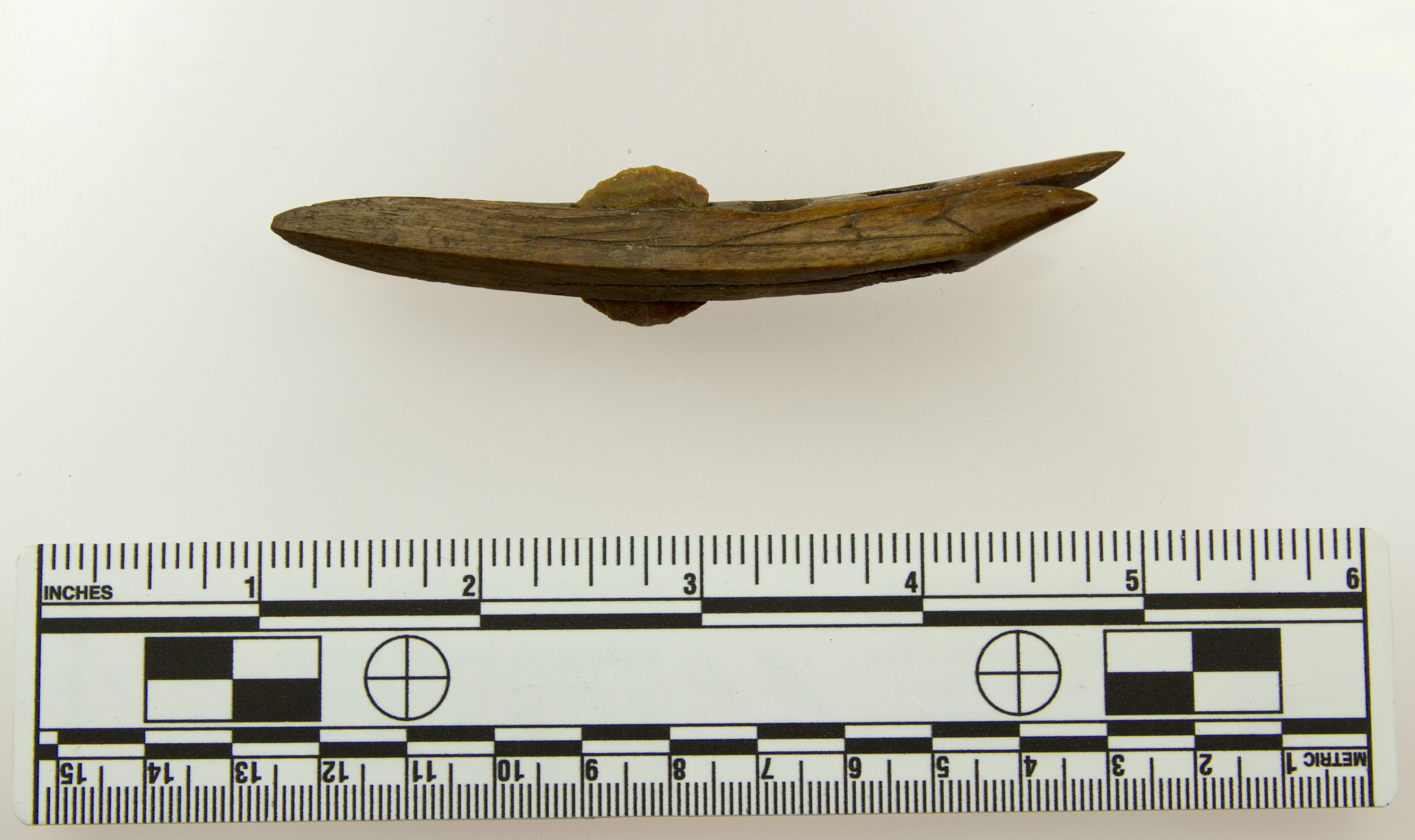 Figure 6: Early Punuk Type IIx harpoon head with Punuk Style 1 Phase 1 decoration (UA1-1933-8628). Early Punuk Type II because it has an asymmetrical trifurcated spur, two lashing slots, a single drilled line hole, and two side blades parallel to the line hole giving it the x designation. The decoration is Punuk Style 1 Phase 1 because the lines are very basic and simple.

As harpoon heads change in form across time, a common perspective is that the differences in form are the result of different cultures utilizing the technology. This idea is extremely complex because similar patterns could be displayed from adaptations within the same culture as a response to changes in an ecosystem. One question going forward then is if the evolution of a functional tool indicates differences among cultural groups, or differences within a single group of people. The best approach going forward would be to gather multiple independent lines of evidence (e.g., looking at potential changes in other artifact types beyond harpoon technologies) to better to test these competing hypotheses.

Changes in harpoon head form could be the result of many different factors such as ecological changes, information exchange, and stylistic spontaneity (Mason, 2009). A change in a harpoon head trait, or within the larger harpoon weapon system, could be a response to a complete change in the species of prey being sought but could also be the result of a prey species changing its behavior.  It is difficult to determine through the scientific process that innovation in a particular piece of technology is present. How one type of harpoon head works more efficiently than another for a specific task is difficult to determine without the use of experimental archaeology ⎯ a type of archaeology that tests prehistoric processes through modern interpretations of the technology. This is why it is difficult to make a case that harpoon heads evolve over time as a response to varying environmental changes and get more efficient as time progresses. It is possible that any particular change in form could result in a more efficient weapon. The question is how can this be measured in a replicable fashion. Looking at the potential knowledge to be gained from studying these organized systems of harpoon heads is interesting.  Raw material for making harpoon heads is bone, ivory, or antler it is arguably easier to acquire than raw material for stone tools because it is acquired when food is captured, and stone tool raw materials generally come from one location which doesn’t change. This difference begs some questions like how are harpoon head manufacturing technologies treated in comparison to chipped stone tool making technologies? How do the differences in production, manufacture, and durability change harpoon technology? Anything that contributes greatly to the production of food is going to have a larger role in societies when acquiring food is not always a given. This is why we should focus more on the technological systems in their entirety which includes chipped stone technologies instead of systems in a narrow view of one particular element of within entire system. A good approach with multiple lines of evidence is always preferable, especially when the technologies utilize multiple raw material resources for single tools.