The museum is temporarily closed, but we're creating online resources for our Virtual Museum, caring for collections, and continuing research. Here’s how you can support UAMN today.

Skip to main content
Museum of the North
Genomic Resources

History of Genomic Resources at UAMN 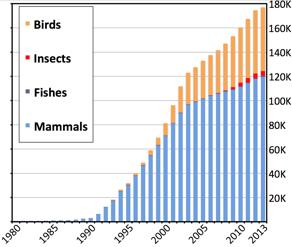 Early years
» » UAMN has maintained a frozen tissue collection for over two decades. Joseph Cook, the museum’s first mammal curator, obtained two ultra-cold mechanical freezers (one new, the other originally purchased in 1982) in 1992. These two freezers and their contents (which at the time consisted almost entirely of bird and mammal tissues) were christened the Alaska Frozen Tissue Collection (AFTC). That same year, Cook and Mammal Collection manager Gordon Jarrell were awarded a grant from the Coastal Marine Institute for the creation of a half-time graduate assistantship for the AFTC. A 1999 grant from NSF (DBI-9876837) to Cook and Jarrell included funds to upgrade the half-time graduate position to a full-time coordinator of the AFTC—a position Jarrel held until his retirement—as well as funds to purchase another ultra-cold. Two additional ultra-colds were also acquired that year. In 2000, Cook, Jarrell, bird curator Kevin Winker, and several other CoPIs at UAMN were awarded an NSF grant (DEB-9981915) to purchase one more ultra-cold as older units began to fail. In 2001, the AFTC was renamed Genetic Resources in the process of the museum expansion to make the name more modern and palatable to donors and funding agencies. Winker and Cook were awarded funds from an institutional NSF EPSCoR award (EPS-0092040) to purchase two new ultra-colds to both accommodate continued rapid growth of the collection and to stay ahead of freezer attrition.» 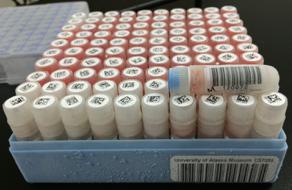 New facility, new technologies
» » In 2003, the Mammal Collection began using barcoded cryovials to capitalize on Arctos’ recently developed object-tracking functionality and has continued to barcode new accessions ever since. In early 2005 all the ultra-cold freezers were moved from an anteroom off the loading dock to a newly constructed 556-ft 2 dedicated facility in the lower level with the other collections, preparation labs, and curators’ and collection managers’ offices.
» » Genetic Resources entered a new phase in 2005 when funds from another NSF EPSCoR grant (EPS-0346770) were used to purchase and install a liquid nitrogen (LN2) plant, three LN2 cryovats, two LN2 transfer dewars, and an oxygen sensor. Jarrell together with staff from the mammal and bird collections began migrating samples from mechanical freezers into the cryovats as well as installing newly collected material into LN2. In 2008, Jarrell retired and recently graduated UAF master’s student Aren Gunderson was hired as coordinator. In 2009 Genetic Resources was rebranded Genomic Resources and an annual operating budget was approved to pay for the increasingly frequent freezer repairs as well as maintenance of the LN2 system. Gunderson was hired as the collection manager of mammals in 2011 but continued to maintain Genomic Resources together with staff from the Bird Collection, a stopgap that quickly proved unsustainable.» 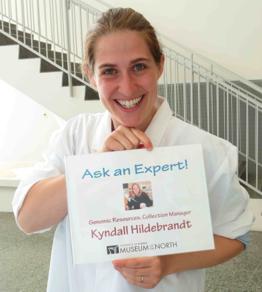 At long last, a dedicated Collection Manager!
» » In recognition of the rapidly growing importance and use of UAMN’s Genomic Resources and the need for a more stable staffing solution, a major milestone was reached in 2012 when the museum director together with the UAF provost approved the creation of a permanent, full-time Genomic Resources Collection Manager position. It also marked the first such position at UAMN not affiliated with a single collection but rather resources—associated with voucher specimens housed in several different collections—requiring similarly specialized care. A globally advertised search resulted in the hiring of UAF and UAMN alumnus Kyndall Hildebrandt, who at the time was working at the U.S. National Museum of Natural History (Smithsonian).»

Genomic Resources today
» » UAMN’s Genomic Resources continues to support cutting-edge research—much of it funded by the National Science Foundation—in a growing number of scientific disciplines. As of 2014, over 150 publications have resulted from research conducted on samples borrowed from Genomic Resources, and countless more have used these published results in subsequent studies. At the same time, active collecting and collaboration with multiple management agencies and other entities guarantees continued growth of this one-of-a-kind resource.
» » Finally, the facility has become a ‘must-see’ for visitors of all kinds and ages. The many UAF classes that request (and are given) Genomic Resources tours and lectures include Genetics, Evolution, Molecular Evolution, Molecular Ecology, Conservation Genetics, Population Genetics, Systematics, Mammalogy, Ornithology, Entomology, Ichthyology, and several Summer Sessions courses. Regular tours are also given to K-12 classes as young as 2nd grade and on up to high school students enrolled in forensics classes, the Rural Alaska Honors Institute, and the Alaska Summer Research Academy. Every year hundreds of mostly local visitors (including many families with children) pass through Genomic Resources during behind-the-scenes tours provided at UAM’s annual Open House and Halloween events. Visiting scientists, dignitaries, and politicians are regularly treated to tours as well. Interested in a tour? Contact Kyndall Hildebrandt.