The University of Alaska Museum of the North, located on the Fairbanks campus, is the only museum in the state with a tripartite mission of research, teaching, and collecting. The museum’s botanical, geological, zoological, and cultural collections, primarily from Alaska and the Circumpolar North, form the basis for understanding the local as well as the global past, present, and future. Through collection-based research, teaching, and public programs, the Museum shares its knowledge and collections with local, national, and international audiences of all ages and backgrounds. 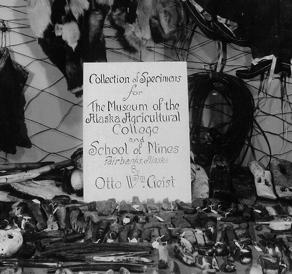 After statehood, the Museum's growth followed waves of rapidly changing times in Alaska. In 1961, the federally created Alaska Cooperative Wildlife Research Unit at the University transferred its mammal, bird, and plant collections to the Museum. In 1970, the Museum acquired existing fish and marine invertebrates collections, as well as the Institute of Northern Forestry’s plant collection from the U.S. Forest Service. After the 1970s pipeline boom, money flowed into the Museum to expand and diversify its art and ethnology collections. In the 1980s, federal and state resource management legislation prompted the collection of new natural and cultural history material from across Alaska. In 1991, the Museum created the Alaska Frozen Tissue Collection, a regional collection of zoological materials supported by the National Science Foundation, the Alaska Department of Fish & Game, the U.S. Fish & Wildlife Service, and others. In 1993, in compliance with the Native American Graves and Repatriation Act, the Museum began the process of returning human remains and other sensitive items from the Museum’s archeology collection to Alaska Native villages across the state. 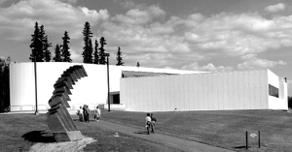 For more than 50 years, the Museum made its home on the University’s lower campus, first on the top floor of the Eielson Building and then in Signers' Hall. In 1976, the Friends of the University of Alaska Museum organized and actively petitioned Alaska Governor Jay Hammond and the Legislature to appropriate funds for a new museum. With their support, the current building opened in 1980. It was a bold architectural statement for its time and was expected to be the first phase of a larger structure.

That larger structure opened in 2005, with a new wing doubling the size of the facilities to 83,000 sq.ft. Designed by architect Joan Soranno and the GDM/HGA team, the signature architecture of the new wing evokes images of glaciers, a diving whale's tail, the prow of a ship, and other Alaska themes. Inside, expanded and renovated research labs, exhibit galleries and educational facilities serve all aspects of the museum's mission.

Today, the Museum is the premier repository for artifacts and specimens collected on state and federal lands in Alaska and a leader in northern natural and cultural history research and education.