The Road to Exhibition 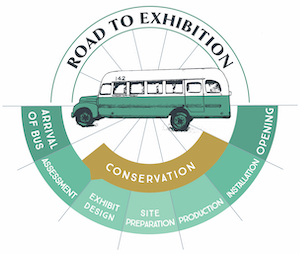 When Can I See the Bus?

Museum conservation and the making of an exhibit experience is a two to three year process.

But you can see the bus now 8:00 am - 8:00 pm Monday - Friday at the ConocoPhillips Alaska High Bay Structural Testing Lab at the Engineering Learning and Innovation Facility (ELIF Building) on the UAF campus.

You can also see the bus at any time through our Livestream!

Museums preserve objects and specimens to be used for research, education, and the ongoing sharing of stories. What we preserve and how we do it involves making many desions. Learn more about who and what is involved in preserving and documenting Bus 142, the objects contained in the bus, and the history represented by them.

The preservation of historic vehicles requires a specialized set of skills. UAMN is working with professional conservators to assess the overall condition and to stabilize the bus for the exhibit. We also are consulting about the long-term preservation of the bus and the objects that accompany it.


B. R. Howard and Associates, of Carlisle, PA, is the contracted conservation team who are undertaking the physical assessment of the bus. We hope to also contract with them for the final conservation treatment.

UAF's Community & Technical College's Welding & Materials Technology program staff and students will collaborate with the UAMN team to stabilize the bus and provide learning opportunities for the CTC program.

We look forward to partnering with other community businesses and individuals to undertake the hands-on preservation work on the bus. Reach out to project lead Angela Linn if you would like to be involved.

Documenting the history of Bus 142 and the stories associated with it is a long-term process involving archival research, interviews, and collaborating with members of the community. Our team is interested in learning and recording YOUR stories about the bus, no matter which phase of its life. If you have a story to share, which might include photos, video, or objects, please reach out to our team using this form or head over to the Friends of Bus 142 website and join the growing community of followers.

The process of making an exhibit involves many people and moving parts. Learn more about the Interpretive Advisory Team and where we are in the development of our focus for the exhibit and how we capture so many diverse perspectives.

Mickey Mariner Hines, Minnesota - Mickey lived in Bus 142 during the summer of 1961 when it first arrived on the Stampede Trail. She shares her stories of what it was like to be part of the earliest days with the bus.
Carine McCandless, Virginia - Carine is the younger sister of Christopher McCandless and the author of The Wild Truth (2014). She works to communicate the ongoing legacy of Chris's story in connection to the bus, as well as representing the "Into the Wild" community. Founder of Friends of Bus 142.
Erik Halfacre, Alaska/Washington - Erik is co-founder of Friends of Bus 142 and manager of the website. He has spent years hiking Alaska's trails and preparing hikers to safely visit Bus 142 on the Stampede Trail.
Kris Capps, Denali Park, Alaska - Kris is a Denali Park & Fairbanks-based reporter. She wrote a 1992 article on the story of Chris McCandless for Alaska Magazine and has been covering the story of the Bus ever since.
Kiana Carlson, Cantwell, Alaska - Kiana (Ahtna Athabascan) grew up and works in the Cantwell and Denali Park area. Her family participated in the filming of the 2006 film, Into the Wild and shares the impact of that process on the communities around Denali.
Rebecca Heaton, Fairbanks, Alaska - Rebecca is an Alaska historian and journalist who has written about the Chris McCandless story for the Fairbanks Daily News Miner.
Diana Saverin, Alaska - Diana is a reporter and writer who spends much of her time living and traveling through remote Alaska. She has written and produced stories about the Stampede Trail for Outside and Alaska Public Media.
Dixie Dayo, Manley Hot Springs / Fairbanks, Alaska - Dixie (Koyukon Athabascan) is a behavioral health therapist and wellness consultant and a cultural resource advisor. She has written and taught on the topics of rural development, traditional healing, and ANCSA.

Eric Heyne, Fairbanks, Alaska - Dr. Heyne is Professor of English at the University of Alaska Fairbanks, where he has taught for over 35 years, and Historical Reprint Series Editor for the University of Alaska Press.  He has published on Alaskan and Western literature and is the editor of Desert, Garden, Margin, Range:  Literature on the American Frontier.
Forest Wagner, Juneau, Alaska - Forest is an Assistant Professor of Outdoor Studies and has been coordinating and teaching that program at the University of Alaska Southeast since 2006. He loves skiing, climbing, and spending time outdoors while also writing and researching topics like human narrative, northern identity, and sense of place.
Maureen Long, Whitehorse, Yukon Territory, Canada - Maureen is an instructor of English in the School of Liberal Arts at Yukon University. She is interested in understanding the role of literature in creating and perpetuating northern identities.
John Heaton, Fairbanks, Alaska - Dr. Heaton is the Chair of the UAF History department and is a specialist in history topics focused on the U.S., American Indian, and the American West (including Alaska). He helps the team better contextualize the bus and its myriad stories within that framework.
Phil Wight, Fairbanks, Alaska - Dr. Wight is an Assistant Professor of History and Northern Studies at UAF. He is an energy and environmental historian, with a focus on infrastructure and mobility. Phil is interested in using environmental history to illuminate the stories of Mickey Mariner Hines, Chris McCandless, and the thousands who have traveled to the bus.
Angela Schmidt, Fairbanks, Alaska - Angela is the Archivist of UAF's Alaska Film Archives and a scholar of northern studies. She will help our team preserve the original films of the bus donated by Mickey Mariner Hines and present and preserve other media elements associated with the stories of the bus.

Kimberly Arthur - Kim is the Museum Curator for Denali National Park and Preserve, and cares for thousands of items that help tell the story of the cultural and natural history of the park region.
Phoebe Gilbert - Phoebe is the Cultural Resources Program Manager and an archaeologist. She helps our team understand the archaeology in the park, which surrounds but does not include, the Stampede Trail.
Erik Johnson - Erik serves as the Park Historian for Denali and contributes to our team by sharing the specific historical events that contextualize the Stampede Trail and the stories and activities associated with Bus 142.
Bridget Borg - Bridget is the Park Biologist for Denali and lives near the Stampede Trail. She travels across this landscape with sled dog teams and helps our team think about the biology of that area and how it contributes to the stories of living off the land in the foothills of the Alaska Range.

Angela Linn - Angela is the Senior Collections Manager of Ethnology & History at UAMN and is the project lead for the Bus. She is the person who is responsible for the direct care of the bus and related objects under the state repository agreement, and is an advocate for including diverse and inclusive decision-making on this project.
Roger Topp  - Roger is the Director of Exhibits, Design, and Digital Media at UAMN. He is co-facilitating the work of the interpretive team and leads his staff to develop the design, fabrication, and installation of the exhibit. He also is leading the efforts associated with the digital media components for the virtual exhibit.
Patrick Druckenmiller - Dr. Druckenmiller is the Museum Director and is supervising the work done by all staff, facilitating communications and logistics with the University administration and the broader community.
Aelin Allegood - Aelin is the Museum Development Coordinator and acts as the primary fundraiser for the museum. She is contributing to the team through her communications with the museum and Bus 142 supporters.
Megan Koch - Megan is the UAMN Director of Visitor Services & Marketing. She helps the team understand the needs of museum visitors and is handling the marketing and promotions associated with the Bus 142 project.
Jennifer Arseneau - Jen is the Education & Programs Manager for UAMN and is a specialist in museum interpretation. She brings knowledge of the lifelong-learning needs of our visitors and is contributing to the interactive elements of the exhibit project.
Josh Reuther - Dr. Reuther is the Curator of Archaeology and Associate Professor of Anthropology at UAF. He is leading the effort to develop a survey of the original bus site on the Stampede Trail and helping our team understand the long-term use of the landscape in Interior Alaska.
Steffi Ickert-Bond - Dr. Ickert-Bond is the Curator of the Herbarium at UAMN and Professor of Botany at UAF. She is helping the team understand the plants found in the area of the Bus on the Stampede Trail and their impact on all the users of the bus over the years, most notably on McCandless.
Link Olson - Dr. Olson is Curator of Mammals at UAMN and Professor of Systematic Biology at UAF. His specialty in evolution and biodiversity will help our team understand the mammals found along the Stampede Trail and how they contribute to the use of that area.