Skip to main content
Museum of the North
Film Center

THEN AND NOW: THE CHANGING ARCTIC LANDSCAPE 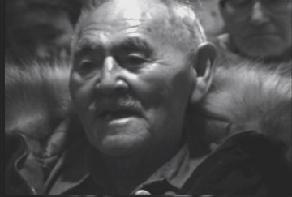 Special Exhibit at UA Museum of the North

In 1979, I»upiaq elders gathered in Barrow to discuss a question critical to their cultural survival:» What knowledge must we pass down to the next generation?

Many of the elders attending this gathering were born before the turn of the century. They spoke passionately about the values they learned observing their elders and the knowledge and skills they acquired by living off the land.» They also spoke about the enormous changes they had observed in their lifetimes.»

The Barrow Elder’s Conference was videotaped, but the tapes were lost for almost thirty years.» In 2008 they were located by I»upiaq elder (and UAF Professor) Ronald Brower, who donated them to the Rasmuson Library Film Archives to be preserved and made available to the public.

The three interviews presented in the exhibit are a part of more than twenty hours of recordings made of the 1979 Barrow Elder’s Conference. These rediscovered tapes are a priceless gift from the past, an irreplaceable record of Alaska Native history and knowledge.

More information about the special exhibit...
»

For this applied visual anthropology project, Leonard Kamerling, the curator of film, has been collaborating with Peter Biella, the director of the Program in Visual Anthropology at San Francisco State University. The project conducted film shooting in Tanzania during the summer of 2008.» Kamerling and Biella return to Tanzania during the summer of 2010 to screen their films.

The film, Strange and Sacred Noise is a collaboration with Alaska composer John Luther Adams and documents the evolution of Adams’ percussion piece of the same title. The film traces the journey of Adam’s composition from its origins in the elemental sounds of nature to its performance in Alaska Range wilderness location that first inspired its creation.
»