UAMN is reopening on July 8. Hours will be 10 am to 7 pm, Wednesday through Saturday. Visit the Hours and Admissions page to learn more about the reopening.
Help us continue our educational, curatorial, and research activities by making a gift online today. The Virtual Museum will remain available for exploring from home.

Skip to main content
Museum of the North
Exhibits

This film is available in three languages. Stream the film on YouTube in high definition by following these links.
» Download all three version of the film with iTunes. 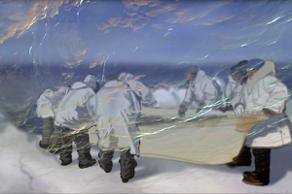 Discover the story of bowhead whale migration through Arctic waters.

This film tells the story of bowhead whale annual migration in the Bering, Beaufort, and Chukchi Seas. The story takes its basic narrative and title from the 2013 calendar edited by Steve Okkonen, A Year in the Life of Bowhead Whales.

Narrated by Chris Koonooka, Fannie Akpik, and Pausauraq Jana Harcharek, the producers of the film aim to improve public understanding of the marine ecosystem, with emphasis on the whales and the zooplankton. Specific topics covered include whale taxonomy, physiology, diet, behaviors, and overall movement through subarctic and arctic waters, as well as the current tagging and aerial observation programs and work with Inupiat whalers.

Beneath the surface, Arctic Currents is a story about more than bowhead whales and Arctic marine ecosystems. It is a film about working together. 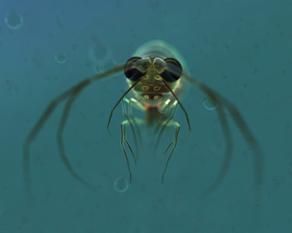 The visual elements of the film center around 3D photorealistic animation of whales, copepods, and krill in arctic waters, as well as hemispheric-level interpretation of bowhead annual movement using MODIS satellite imagery, and featuring aerial survey and satellite tagging data. Narration for the film will be recorded and presented in English, Inupiat, and St. Lawrence Island Yupik.

Arctic Currents: A Year in the Life of the Bowhead Whale is funded by the Bureau of Ocean Energy Management, the Cooperative Institute for Alaska Research, the Center for Global Change and Arctic System Research, and the School of Fisheries and Ocean Sciences.

Project funding is administered by the University of Alaska Coastal Marine Institute.

Read more about the project on our blog.