Ocean acidification (OA) is the result of anthropogenic increases in atmospheric carbon dioxide that is later absorbed by the ocean. This change in ocean chemistry makes the global oceans more acidic. Concerns over increasing acidity in Alaska and how this phenomenon will impact Alaska’s Blue Economy spurred the creation of the Ocean Acidification Research Center (OARC) within the College of Fisheries and Ocean Sciences (CFOS) at the University of Alaska Fairbanks (UAF). 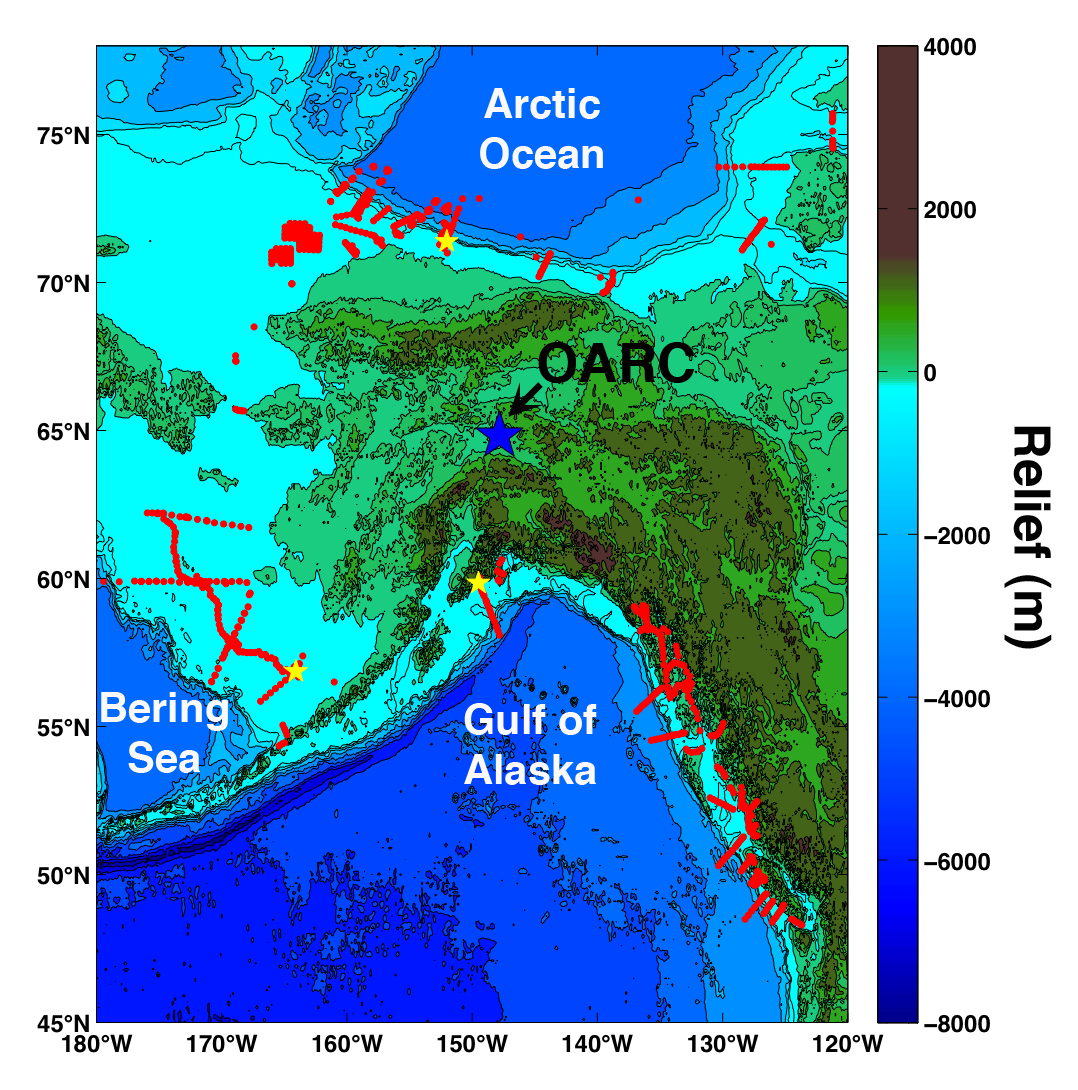 Placement of this center in Alaska is critical to the state’s long-term interests because the region will experience the effects of ocean acidification faster and to a greater degree than in lower latitudes due to colder water temperatures, ocean circulation patterns, and highly productive continental shelves. These characteristics act to enhance the transport of carbon dioxide (CO2) from the atmosphere into the ocean, which may accelerate acidification.

Thank you for your support!

Here are a few helpful links to learn more information about OA research in Alaska and around the globe.

For more information, please email oarc@cfos.uaf.edu or tweet us at @OARC_Alaska.

The Surface Ocean CO2 Atlas (SOCAT) is out for 2021!  The OARC contributes to this annual data product to be used for quantification of ocean CO2 uptake.

The Coastal Ocean Data Analysis Product in North America (CODAP-NA) is out!  Check out the new paper we coauthored with lead author Liqing Jiang on inorganic carbon, oxygen, and nutrients on the North American ocean margins.

The Alaska Ocean Acidification Network hosted an ocean acidification session at the end of the 2021 Alaska Marine Science Symposium where 18 researchers gave 5-minute updates on their activities, results and plans.

OARC is a member of the Marine Arctic Ecosystem Study (MARES) that won the 2019 Excellence in Partnership award from the National Oceanographic Partnership Program (NOPP). The award was announced in February 2020. The MARES project is an international, interagency partnership with more than 25 groups from federal, state, tribal, academic, and private groups in Alaska and Canada. The MARES project looked at more than 20 variables to understand the structure and function of the marine ecosystem in the Beaufort Sea. The MARES project was lead by Stantec’s Dr. Francis Weise. OARC deployed autonomous sensors to measure carbon parameters in the Alaskan and Canadian Beaufort Sea shelf near the Mackenzie River canyon.

See more information about the award.