The Arctic polar regions have been home to humans for thousands of years. While much has changed since first contact between Inuit and Europeans more than one thousand years ago, many culturally and linguistically distinct peoples remain nutritionally, culturally and economically reliant on available traditional marine-based food resources. As scientific interest in the Arctic has increased, so has the potential for conflicts between research and subsistence users, typically in biologically significant areas. Coastal Alaskans in western and northern Alaska are adapting to shifting industrial and environmental regimes.

Sikuliaq was designed to work in Arctic and subarctic regions where coastal community residents hunt for whales, seals, walruses and other animals. Acknowledging the importance of maritime subsistence activities in these regions, a new set of operating guidelines was created to avoid disrupting Alaska Native hunters in coastal communities. 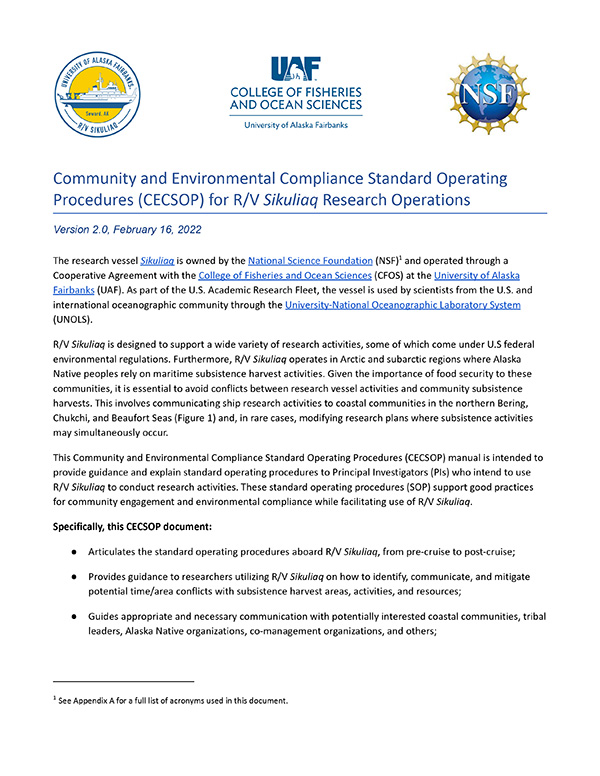 The Community and Environmental Compliance Standard Operating Procedures (CECSOP) for R/V Sikuliaq Research Operations provides guidance  to scientists that intend to use Sikuliaq to conduct research activities. Researchers and coastal community members use the process to discuss research cruise plans and avoid conflicts between scientific research activity and subsistence hunting or other cultural practices. In this way, the needs of both Sikuliaq researchers and coastal community members are addressed. The standard operating procedures are designed to be flexible so that they can be applied to the specific needs of each research operation.

Sikuliaq is the first vessel in the University-National Oceanographic Laboratory System to adopt such a process. The procedures are based on suggestions from the Arctic Waterways Safety Committee, which was created in 2014 “to ensure a safe, efficient and predictable operating environment for all Arctic waterway users.” Its members primarily represent subsistence hunters, companies and municipalities.

The CECSOP is a living document, designed so that procedures can grow and adapt as underlying circumstances. Those who helped create the document hope it may serve as a model for other scientific, commercial and industrial vessel operators to work effectively with subsistence hunting communities in the Arctic.

Read about the agreement in an academic journal article published by Marine Policy in 2017.