Were you interested in using the Salisbury for your own event? The schedule is tight, but information is available.

The 450-seat proscenium theatre is roughly 40' wide and 22' tall, with 60 line sets (including 6 electrics, main curtain, grand border, scrim, cyc and standard masking in a 59' fly loft), over 20 opportunities for traps, a large hydraulic orchestra pit, 2-story side slots, surround sound system, over 500 dimmers and a full complement of lighting equipment.

The Salisbury Theatre is conveniently located in the heart of “lower campus,” connected to the Fine Arts Complex accessed through the Great Hall (where both our box office and department office are located).

The Salisbury actually opens up to the Lab Theatre, a flexible space with reconfigurable seating risers; the playing space is effectively 80’ deep.

Truly an amazing space to study undergraduate theatre and film.

History of the theatre

The Lee H. Salisbury Theatre, inside the Fine Arts Complex, was built in 1969 and originally dedicated in 1970 as the Fine Arts Theatre. The theatre seats 430 in steep-sloped seating, has a hydraulic orchestra pit, state-of-the-art sound system and computerized lighting. When it was built, it was hailed as the best-equipped collegiate theatre on the West Coast.

Lee Salisbury came to Alaska at the suggestion of his sister-in-law, Druska Schaible, and began teaching at UA in 1955. Before coming to Alaska, he did radio and stage work for seven years in New York and worked in summer stock and repertory theater in New England. For many years, Salisbury was the sole faculty member of the university’s speech and drama program. He is also credited with playing a pivotal role in securing support for building the theatre on campus.

When he started teaching in the late 1950s, dramatic performances were staged in the gym, which is now Signers’ Hall. The sets and lights had to be taken down every Friday night so ROTC students could fall into line every Saturday morning, and productions had to be staged around the basketball games and practices. The situation improved with the opening of Schaible Auditorium in 1957, but due to tight funding, Schaible was built without a real stage. In place of a center stage, the auditorium had a large blackboard, which required the theatre department to create U-shaped sets that wrapped around the blackboard. Ben Zeller, now a professional designer in Hollywood, once built a revolving set for a production at Schaible Auditorium.

Salisbury directed nearly 100 plays in more than 30 years at UAF, the longest continuous tradition of theater production in Alaska. He also served as commissioner of the Alaska Educational Broadcast Commission, the predecessor of the Alaska Public Radio Network, from 1968 -1979. His work led to the establishment of KUAC-FM. In addition, he created a pilot program designed to ease the transition of Alaska Native students from rural communities to Fairbanks.

When Salisbury retired from teaching at UA in 1988, he became a Professor of Speech Emeritus, and in 1992, students petitioned the board of regents to rename the theatre in his honor. Although the regents approved the name change, it is university policy that no facility be named for a living person until they have been retired for five years. On June 4, 1993, the theatre was rededicated. Salisbury died March 8, 2015, in Bainbridge Island, Washington. Hundreds of people attended a memorial in Fairbanks later that year.

The UAF Scene Shop is conveniently located just off Stage Right of the Salisbury Theatre. With a well-equipped shop separated by 20-plus-foot tall soundproof doors, we can make it look like Rome was built in a day!

Theatre and Film UAF’s Costume Shop is located on the bottom level of the Fine Arts Complex in room #107. Shop hours are from 1-5pm Monday thru Friday. The costume shop is staffed by a part-time supervisor and student assistant(s). The costume designer is also regularly on hand.

UAF’s Costume Shop is unusually large and spacious compared to most theatrical costume shops around the world. Facilities include an accessory and shoe storage room; a room for hat, wig and makeup storage; and an upstairs storage for stock costumes. Attached to the costume shop are the men’s and women’s dressing rooms and bathrooms, equipped with showers. The shop and storage facilities have been praised by one costume designer as “the most organized costume shop on the planet!”

Besides constructing costumes for main stage shows, the shop is also used for costume design classes, students working for practicum credits and the Student Drama Association. The Costume Shop loans out costumes and equipment to students and community nonprofit organizations. 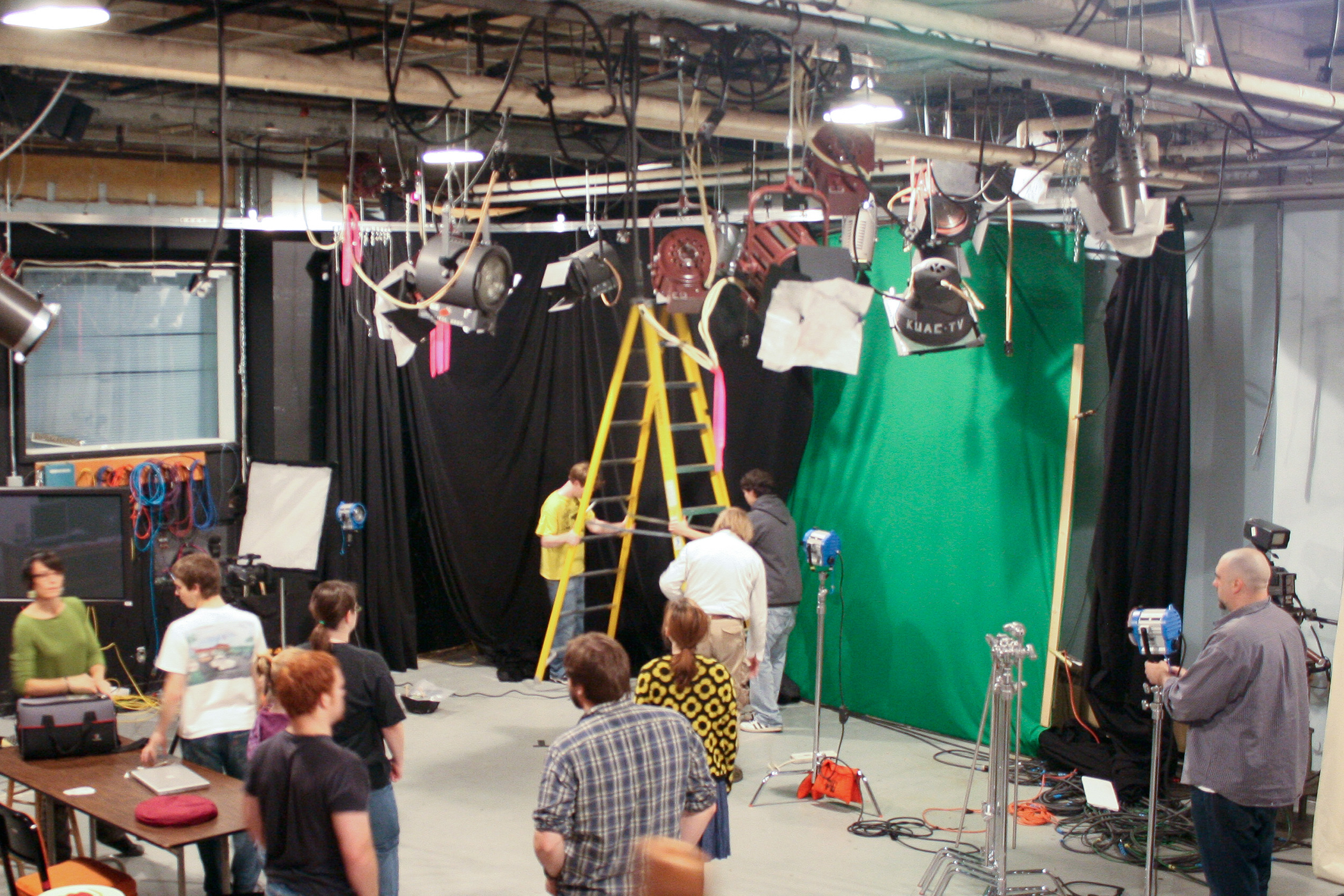 We have a strong relationship with KUAC, the public broadcasting stations in Fairbanks, Alaska (conveniently located down the hallway from the Theatre Department). Many of our film courses occur in its television studio. 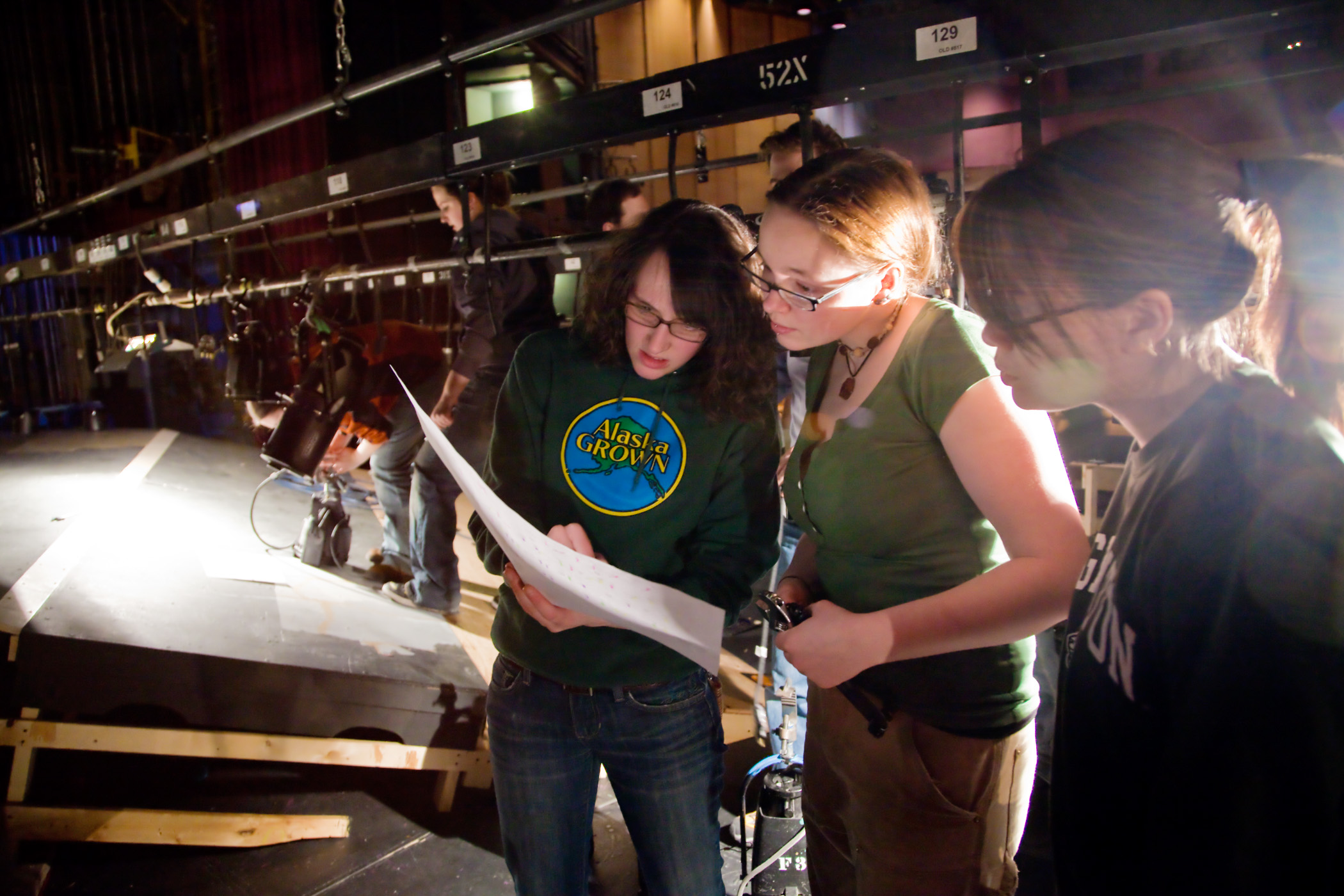 The "E-Shop" (electrics shop) is conveniently located on the same level as the stage, adjacent to the Lab Theatre.

Students get hands-on training at UAF!