All of our auditions are open to the public. You do not need to be affiliated with UAF to take part in our productions!

Auditions for The Shape of Things

The Shape of Things by Neil LaBute, directed by Rachel Blackwell

Auditions: Saturday, November 19, 2022 afternoon.  Performances being late February.  There will be light table work started before the Holiday break; but no rehearsals over Thanksgiving or Solstice / New Year breaks.
Play Description from the publisher

How far would you go for love? For art? What would you be willing to change? What price might you pay? Such are the painful questions explored by Neil LaBute in THE SHAPE OF THINGS. A young student drifts into an ever-changing relationship with an art major while his best friends' engagement crumbles, so unleashing a drama that peels back the skin of two modern-day relationships.

AUDITION INSTRUCTIONS: Actors are asked to sign up (sign-up sheet on the Department callboard, by 223 Fine Arts Complex - photo right or below.)  for a private monologue 5-minute slot 1:00-2:30pm.  Auditioners will then be called in a group to read with other actors from 2:30-5:00pm.
Auditions will be in the "Green Room"; Theatre 101 at the base of the stairs to the left of the Salisbury as compared to the Great Hall / downstairs from the sign-up callboard.
Please bring a completed copy of the Theatre & Film UAF Audition Form to your monologue appointment.  Blank forms will be available at the auditions.

Fairbanks community members and UAF students are encouraged to audition.

Actors should read the audition sides which are available in digital form only via our website at https://uaf.edu/theatrefilm/auditions/ .  Those wanting to read the whole script should contact Rachel Blackwell <blackwell.rachel@gmail.com>

REHEARSALS: will depend on the availability of cast members, but Rachel would initially like to have rehearsals on Mondays, Tuesdays, Wednesdays and Thursday evenings beginning January 18, with a few table readings in late November/early December.  Times are flexible, and not all of the cast members will have to be at every rehearsal.  Rehearsals will become more rigorous, complex, and demanding of time as opening night approaches.

THE ROLES: 4 total (2 female, 2 male) - Actors of all ethnicities and gender identities are encouraged to audition.

Adam is a nerdy, awkward English major working part-time in a museum as a security guard. Adam is shy, intellectual, indecisive, decisive, amiable and a nerd; a man wanting to change and develop his life. He is in his early twenties.

Phillip, Adam’s boorish friend. Phillip is supercilious, aggressive, amiable and quick witted. He is a good friend to Adam. He is in his early twenties.

Jenny is Phillip's fiancée, who years before had an unrequited crush on clueless Adam. Jenny is a conventional small town girl who is happy, vulnerable and confused; she is out of her depth when she meets Evelyn. She is in her early twenties. 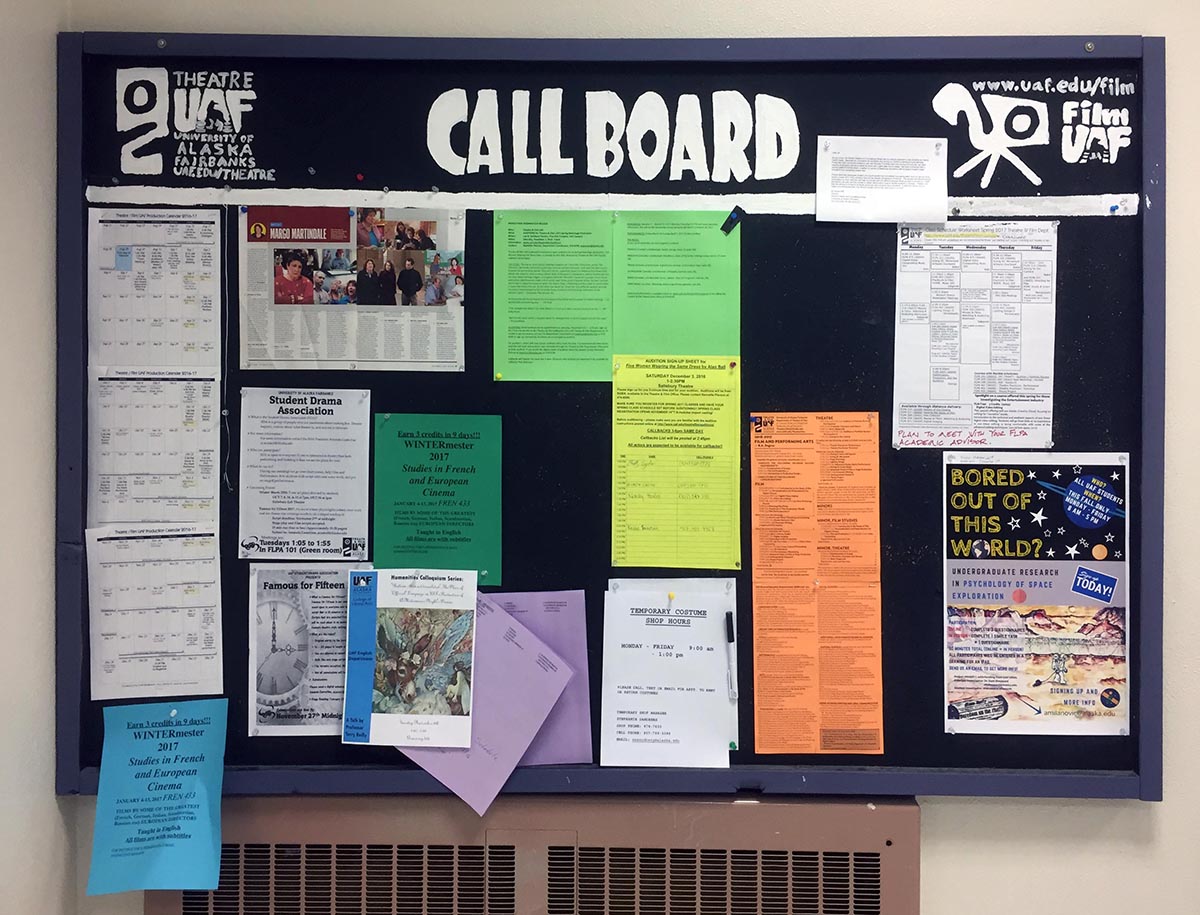 The callboard is located in the Theatre wing of the Fine Arts building on UAF's main campus. From the Great Hall, face the Salisbury Theatre. To your left is a hallway (between the Salisbury and the Concert Hall). Go down the stairs. The callboard will be at the bottom of the stairs on your right.