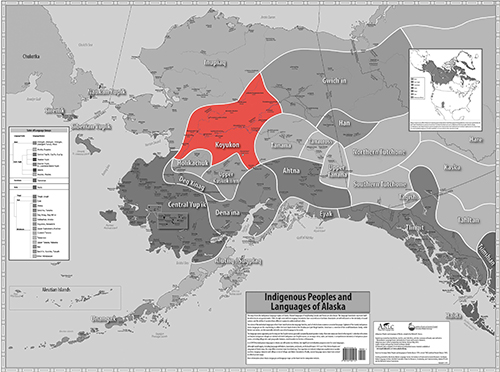 Denaakk'e (also Koyukon) occupies the largest territory of any Alaska Athabascan language. The name Denaakk'e [də-nae-kuh] derives from the word denaa 'people' and the suffix -kk'e 'like, similar', thus literally meaning 'like us'.

Denaakk'e is spoken in three dialects -- Upper, Central, and Lower -- in 11 villages along the Koyukuk and middle Yukon rivers. The total population is about 2,300, of whom about 300 speak the language.

A Jesuit Catholic missionary, Jules Jette, did extensive work on the language from 1899 through 1927. Since the early 1970s, native Koyukon speaker Eliza Jones has produced much linguistic material for use in schools and by the general public.