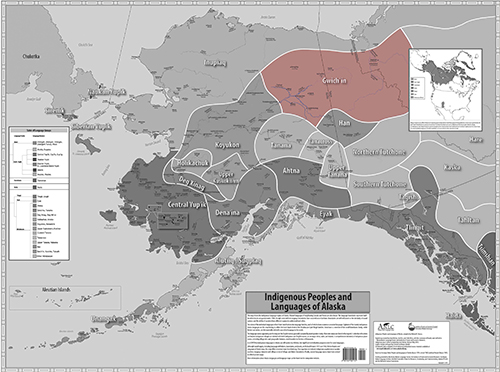 Gwich'in (Kutchin) is the Athabascan language spoken in the northeastern Alaska villages of Arctic Village, Venetie, Fort Yukon, Chalkyitsik, Circle, and Birch Creek, as well as in a wide adjacent area of the Northwest Territories and Yukon Territory.

The Gwich'in population of Alaska is about 1,100, and of that number about 300 are speakers of the language.

Gwich'in has had a written literature since the 1870s, when Episcopalian missionaries began extensive work on the language. A modern writing system was designed in the 1960s by Richard Mueller, and many books, including story collections and linguistic material, have been published by Katherine Peter, Jeff Leer, Lillian Garnett, Kathy Sikorski, and others.