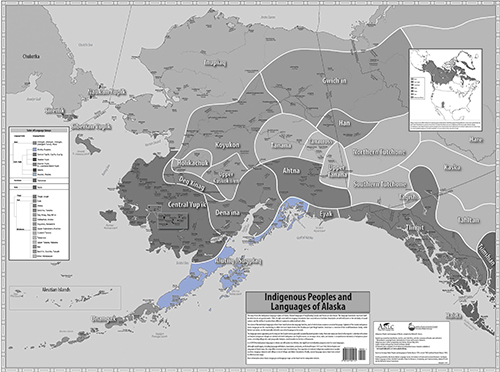 Alutiiq (Sugpiaq, Sugcestun) is a Pacific Gulf variety of Yupik Eskimo spoken in two dialects from the Alaska Peninsula to Prince William Sound, including Kodiak Island. Of a total population of about 3,000 Alutiiq people, about 400 still speak the language.

Although traditionally the people called themselves Sugpiaq (suk 'person' plus -piaq 'real'), the name Alutiiq was adopted from a Russian plural form of Aleut, which Russian invaders applied to the Native people they encountered from Attu to Kodiak.

Closely related to Central Alaskan Yup'ik, the Alutiiq language is divided into the Koniag and the Chugach dialects. Koniag Alutiiq is spoken on the upper part of the Alaska Peninsula and Kodiak Island (and Afognak Island before it was deserted following the 1964 earthquake). Chugach Alutiiq is spoken on the Kenai Peninsula from Nanwalek and Port Graham to Prince William Sound where it meets Eyak.

The first work on Alutiiq literacy was done by Russian Orthodox monks Herman and Gideon and the talented student Chumovitski, although their progress continued only until about 1807 and almost none of their work survives. After that, a few others -- notably Tyzhnov, Uchilishchev, and Zyrianov -- worked on the language during the Russian period, producing a translation of Matthew, a Catechism, and primer, but they achieved less success than those who worked in Aleut.

The first modern linguistic work on Alutiiq was done by Irene Reed in the early 1960s and by Jeff Leer beginning in 1973. Leer has produced both a grammar and a dictionary of Koniag Alutiiq for classroom use.