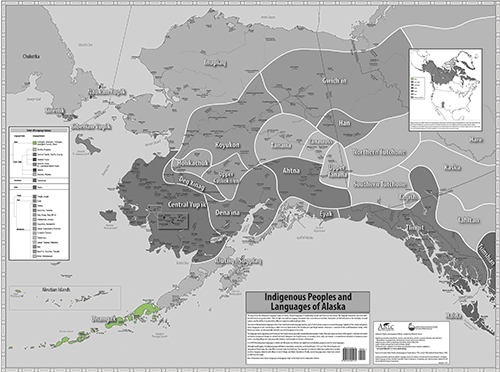 Unangam Tunuu (Aleut) is one branch of the Eskimo-Aleut language family. Its territory in Alaska encompasses the Aleutian Islands, the Pribilof Islands, and the Alaska Peninsula west of Stepovak Bay.

Unangam Tunuu is a single language divided at Atka Island into eastern and the western dialects. Of a population of about 2,200 Unangax̂, fewer than 100 speak the language. This language was formerly called Aleut, a general term for introduced by Russian explorers and fur traders to refer to Native Alaskan of the Aleutian Islands, the Alaska Peninsula, Kodiak Island, and Prince William Sound (see the section on the Alutiiq language).

The term Unangax̂ means 'person' and probably derives from the root una, which refers to the seaside. The plural form 'people' is pronounced Unangas in the western dialect and Unangan in the eastern dialect, and these terms are also sometimes used to refer to the language. The indigenous term for the language is Unangam Tunuu.

Although the early Russian fur trade was exploitative and detrimental to the Unangax̂ population as a whole, linguists working through the Russian Orthodox Church made great advances in literacy and helped foster a society that grew to be remarkably bilingual in Russian and Unangax̂. The greatest of these Russian Orthodox linguists was Ivan Veniaminov, who, beginning in 1824, worked with Unangax̂ speakers to develop a writing system and translate religious and educational material into the native language.

In modern times the outstanding academic contributor to Unangax̂ linguistics is Knut Bergsland, who from 1950 until his death in 1998 worked with Unangax̂ speakers such as William Dirks Sr. and Moses Dirks -- now himself a leading Unangax̂ linguist -- to design a modern writing system and develop bilingual curriculum materials including school dictionaries for both dialects. In 1994 Bergsland produced a comprehensive Unangax̂ dictionary, and in 1997 a detailed reference grammar.

A Memrise Course in Unangam Tunuu 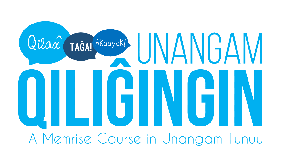 Unangam Qiligingin is a free online vocabulary course that was designed as a companion to Niiĝuĝis Mataliin Tunux̂tazangis / How the Atkans Talk: A Conversational Grammar by Anna Berge and Moses Dirks (2008). Using Memrise's spaced repetition algorithm, Unangam Qiligingin helps you become familiar with new Unangam Tunuu words at your own pace, and can be used with the Memrise application on a computer or on your mobile. It was created by Kevin Martens Wong and Julian Rauter under the supervision of Dirks and Berge for the CoLang 2016 Unangam Tunuu practicum.

Research related to CoLang 2016 at UAF

During the Collaborative Language Institute (CoLang) 2016 held at UAF, several students participated in the Unangam Tunuu practicum, working with Unangam Tunuu speaker and linguist Moses Dirks and UAF faculty member Anna Berge, while using the Alaska Native Language Archive to study language documentation and revitalization. This project repurposes language learning materials from the 1970s and was worked on by Myles Creed, an Alaskan who is currently studying linguistics at the University of Victoria in Canada. The project aims to be a teaching and learning tool for those working to revitalize the Unangam Tunuu language in their communities.

The Unangam Tunuu Language Tools website is a collection of free online resources that were developed primarily using archival materials housed at the Alaska Native Language Archive, and includes the following components: Talking Dictionary, Numbers, Stories & Texts, Sentence Structure, Word Structure, Songs, and Chatroom. The overarching goal of this project was to explore different ways of displaying language learning materials online so that they may be accessible, effective, and engaging to learners. The diverse array of tools, which can be accessed via computer, tablet or phone, was created through the efforts of Edwin Ko, Maya Wax Cavallaro, Audrey Richardson, Moses Dirks, and Anna Berge during the CoLang 2016 Unangam Tunuu practicum.