The Department of Theatre and Film announces applications for the 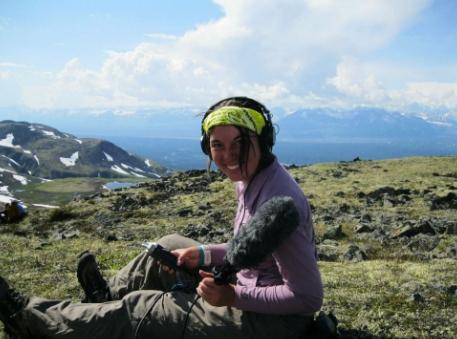 This grant is established in memory of Adrina Louise Knutson, a young woman who loved family, friends and community, touching all. Whose smile lifted darkness and warmed hearts. Adrina was born February 16, 1991, the first daughter of Tony and Julie (Lightwood) Knutson. Her home was at Kenny Lake on the homestead of her grandparents, Sam and Marian Lightwood. She attended Kenny Lake School for 13 years and completed three years at UAF as a film major.

While on a University of Alaska Fairbanks sponsored film project in Tanzania, Africa, Adrina Knutson, 21, died August 6, 2012 in an auto accident. An artist, a dancer, a friend, a sister, an inspiration, there was nothing Adrina couldn't do; her passionate kindness impacted so many lives. From a young age, she used art, photography, writing, dance and film to express herself. Adrina saw life as an adventure waiting to be had, taking along anyone willing.

This grant is designed to support dedicated filmmakers who reflect Adrina’s creative spirit.

GRANT PURPOSE: To provide production grants to Theatre and Film students as they pursue film projects as a part of their undergraduate study at the University of Alaska Fairbanks' College of Liberal Arts Film & Performing Arts (FLPA) program.

CRITERIA QUALIFICATIONS:
Recipient must be a UAF student. Recipient does not need to be a Film & Performing Arts major, but must be working with and through the Theatre and Film department as they create their film.

Preferences have been ranked by the Knutson family as follows:

Please upload the following items into a Google Drive folder with permissions set to “Anyone may View/Comment). Please send a link to this google drive through our online form by 5PM February 3, 2023.

Projects will be selected based on the interdisciplinarity of the film/project and the student's commitment to the profession.

All film rights remain with the creator. If the film is shown in such a manner that produces ticket revenues or other revenues, it is the creator's choice whether such proceeds are donated back to the fund to allow it to continue into the future.