Math in a Cultural Context (MCC) is a supplemental elementary school math series. The math modules that compose MCC are the result of a rather extraordinary collaboration of educators, Yup’ik elders and teachers, mathematicians and math educators, and Alaskan school districts. This collaboration spans nearly two decades of work: forming meaningful relationships between the parties of this work to producing not only culturally relevant materials that connect local knowledge to school knowledge, include integrated materials (literacy, geography, and science), and according to rigorous experimental and quasi-experimental designs used in numerous studies found MCC to be effective. These modules are available for download under a Creative Commons Attribution-NonCommercial 4.0 International License. 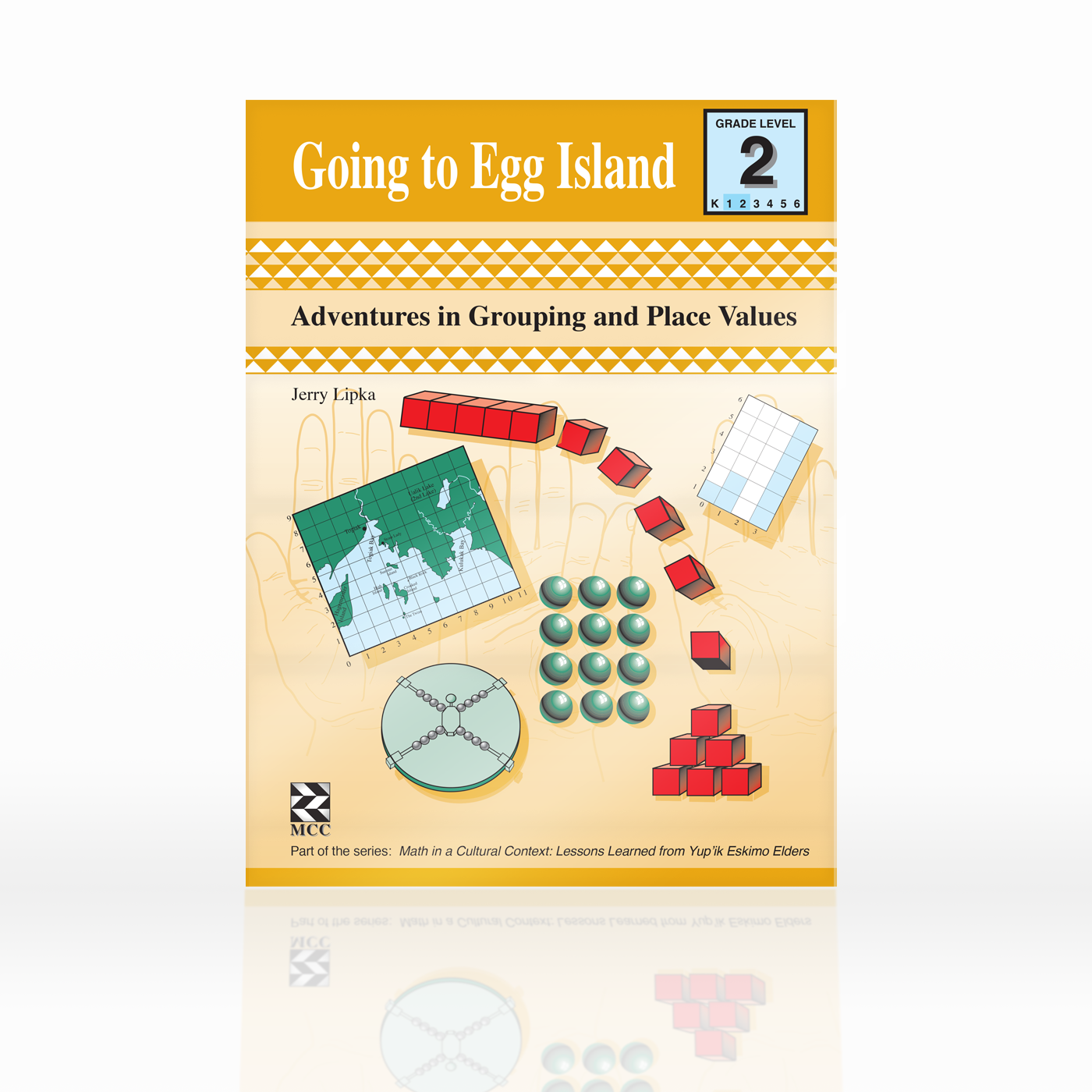 This module is designed for students in grades one and two. In a series of problems built around the story of a second-grade girl gathering sea bird eggs in the spring, students learn and apply the mathematical concepts and skills of counting and grouping two-digit numbers, estimating, measuring, sorting and place values. Students play traditional Yup'ik games while simultaneously investigating number patterns, which lead to a strong sense of grouping and place values.

Elementary number concepts. Students learn how to group objects, decompose and compose numbers using addition or subtraction, develop the concepts of place value and numeration, learn to use a two-dimensional coordinate system. For example, students learn how to form groups of five (grouping), how to express a number in terms of a number of groups of five (composing and decomposing numbers) and/or five groups of groups of five (group of 25), record the number of units, groups of 5, and groups of 25 and make connections to the Yup’ik counting system and the base 10 system (place value and numeration), and how to find and designate objects or locations on a simple map (two-dimensional coordinates).

Egging, which is the subsistence practice of gathering eggs, particularly that of the Black-Legged Kittiwake (a ground-nesting bird common to southwest Alaska), is the central cultural context of the module. However, in the module students also learn to count in Yup’ik and they study the mathematical structure of the traditional Yup’ik number system, which is a base 20 (with sub-base 5) number system. To reinforce the concepts of grouping, place value, and numeration, students also learn how to use different abaci from different cultures (e.g., western base 10, Chinese) and then construct their own Yup’ik abacus to correspond to the Yup’ik number system. 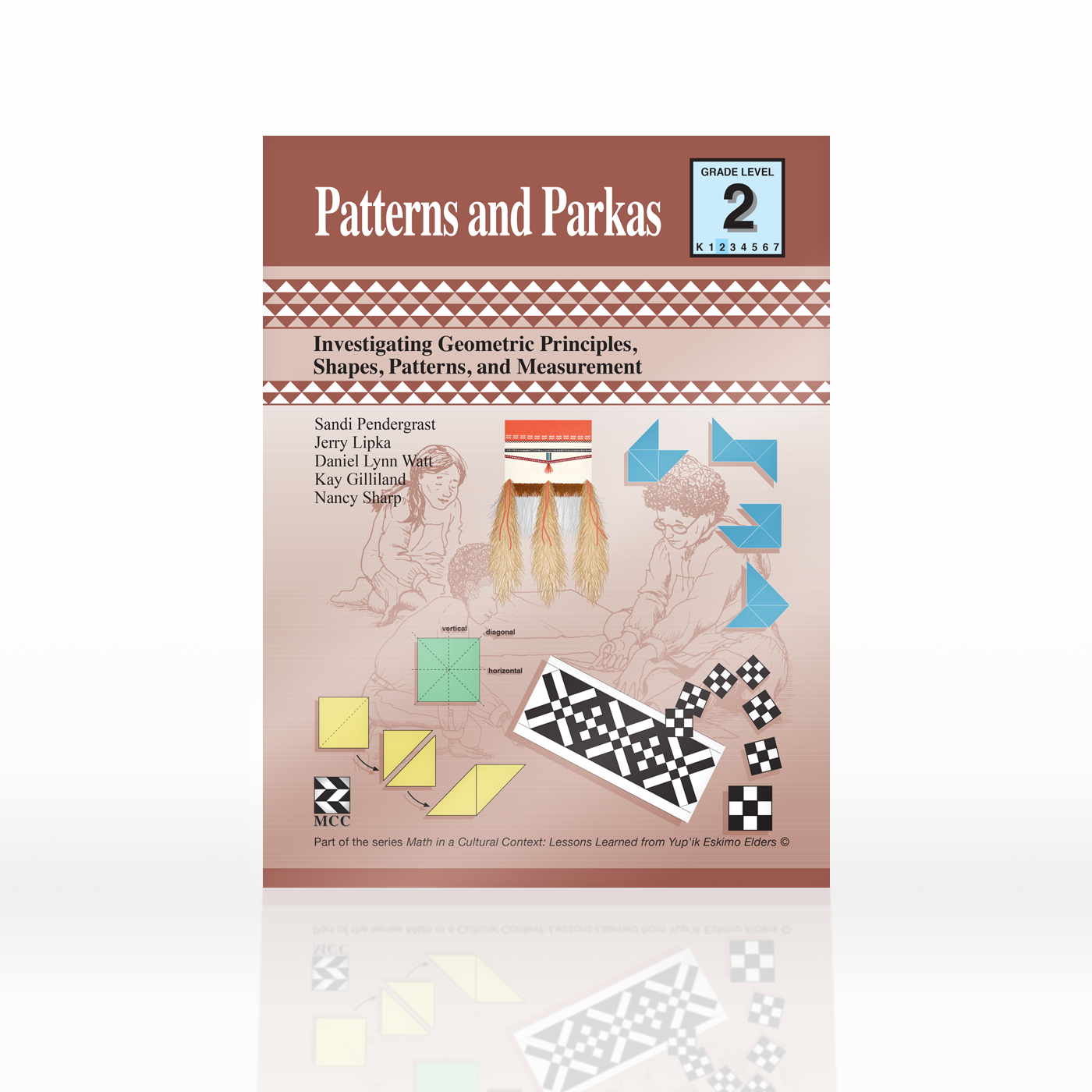 Grade two students learn about the properties of shapes including squares, rectangles, triangles, and parallelograms. They learn a variety of ways to make those shapes and how Yup’ik elders use these shapes to create patterns. As the students make shapes, they learn about geometrical relationships, symmetry, congruence, proofs and measuring. Students connect learning in the community to learning in school.

Making border patterns for the hood, cuffs, and hemline of a traditional parka provides the overall cultural context for the module. Students learn traditional Yup’ik ways to make patterns for parkas by constructing, manipulating, and repeating geometric figures. 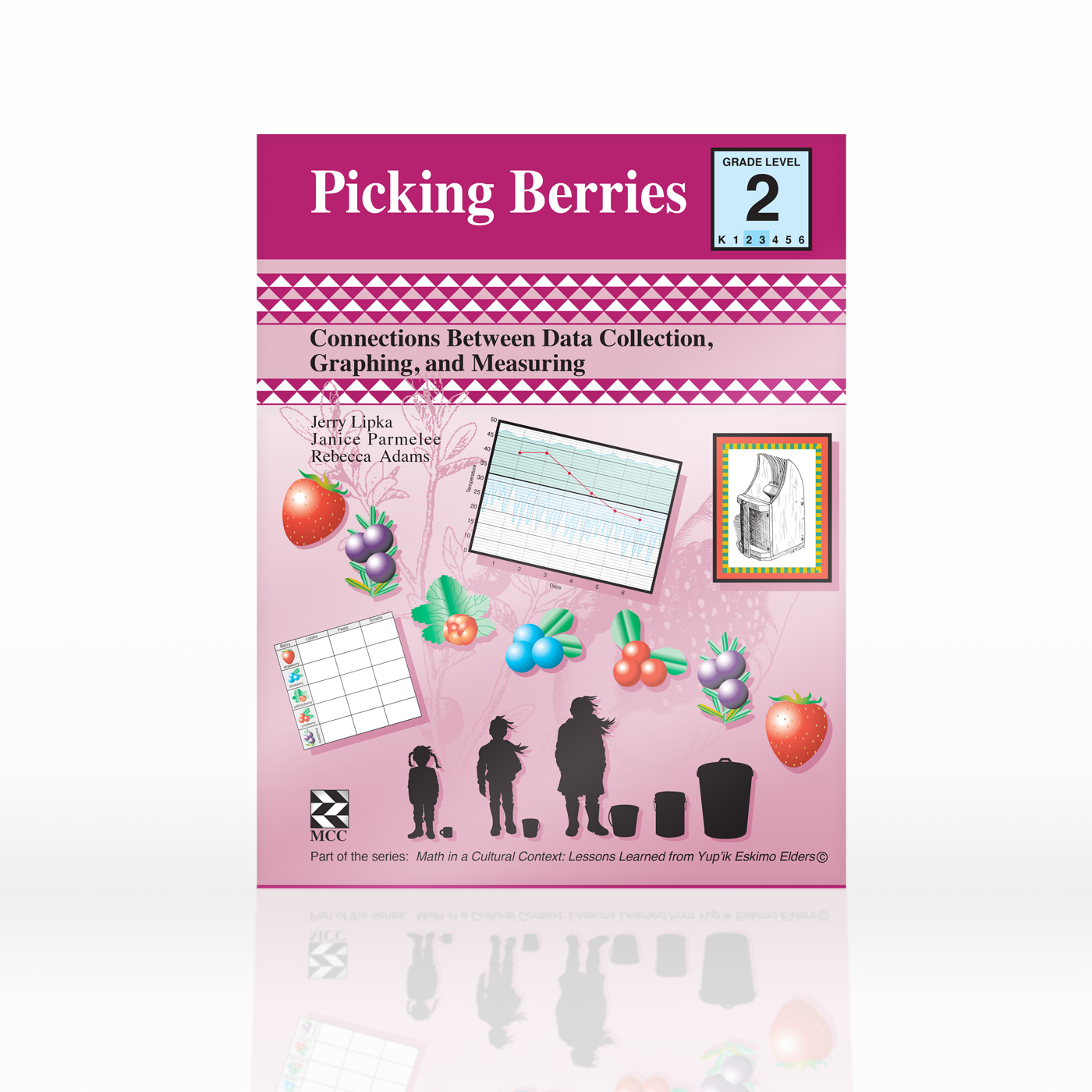 In this module for grades two and three, students engage in a series of hands-on activities that help them explore data, graphic representation and linear measuring. Students gather data related to the berry harvest to build and analyze tables and graphs, and they learn to read thermometers and measure the length of their shadows.

Key concepts from statistics. Students learn how to collect, organize, display, and interpret data. For example, students learn how to determine an appropriate unit for measuring and how to use a measuring device, like a ruler (collecting data), how to put the data into a table (organizing data), how to construct a line graph or bar graph of the data (displaying data), and to explain what a graph means (interpret data). Students also learn about identifying patterns in data and how to use data to formulate and test conjectures.

The subsistence practice of picking berries provides the overall cultural context for the module. Yup’ik names of the berries found in southwest Alaska are taught. How the seasons, weather, and temperature affect the growth and harvest of berries are explored, as well as the role of berry picking in Yup’ik culture and traditional Yup’ik recipes for using berries in cooking. Students also learn Yup’ik units for measuring length, which correspond to measures of the body (e.g., arm span or hand width). 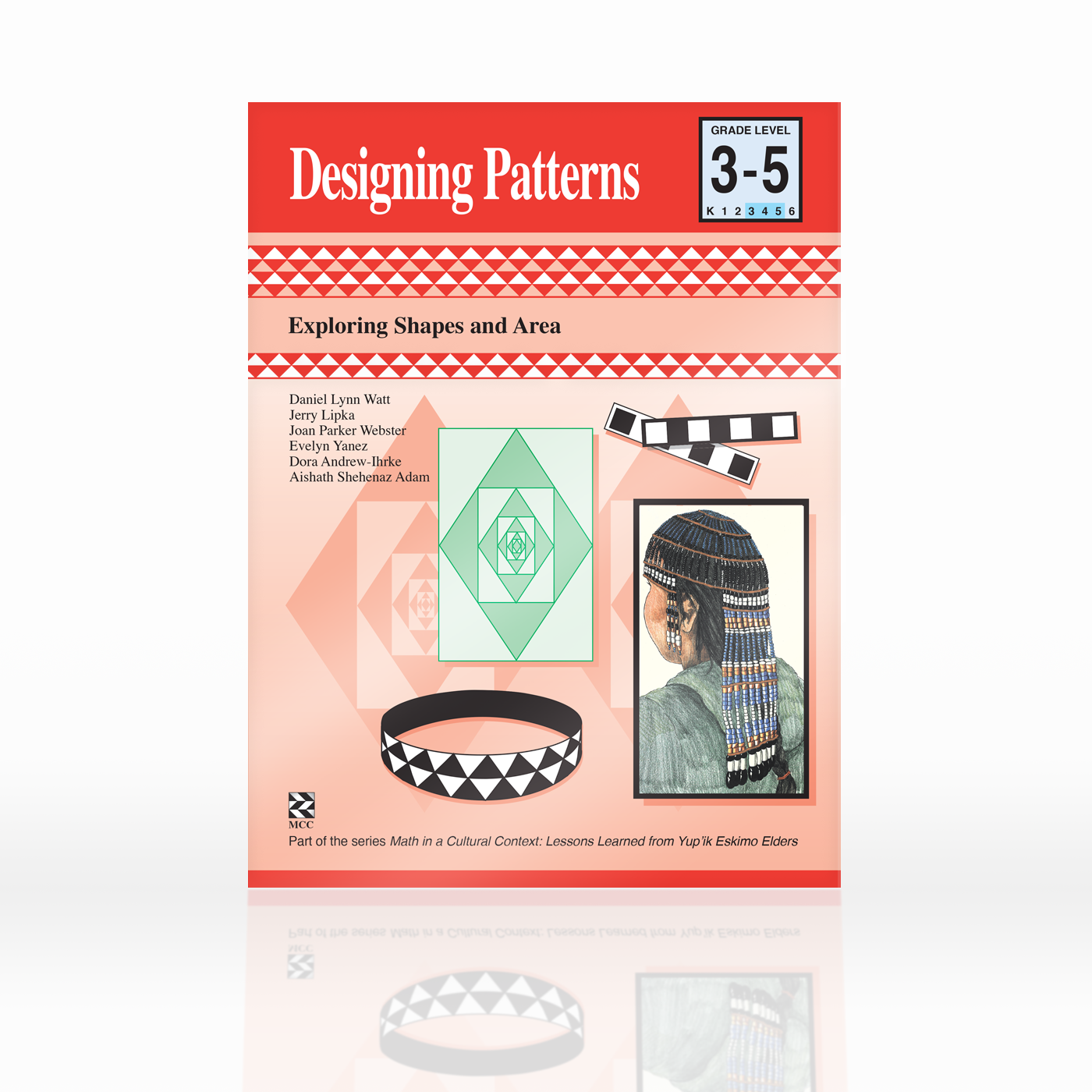 In this module designed for grades three to five, students design patterns to be used in a headdress or similar linear strip. They explore properties of shapes, lines of symmetry, and part-to-part and part-to-whole relationships. The module provides numerous opportunities for the teacher to extend and adapt this curriculum, from further explorations of fractions to Yup’ik cultural knowledge.

Geometric properties of polygons (esp. rectangles, rhombi) and introduction to area. Rectangles and rhombi are decomposed into triangles and properties such as symmetry and congruence are explored. Introduction to proof and how to make and justify a mathematical conjecture and opportunities are provided to make connections to fractions.

This work is licensed under a Creative Commons Attribution-NonCommercial 4.0 International License.  | Back to Top 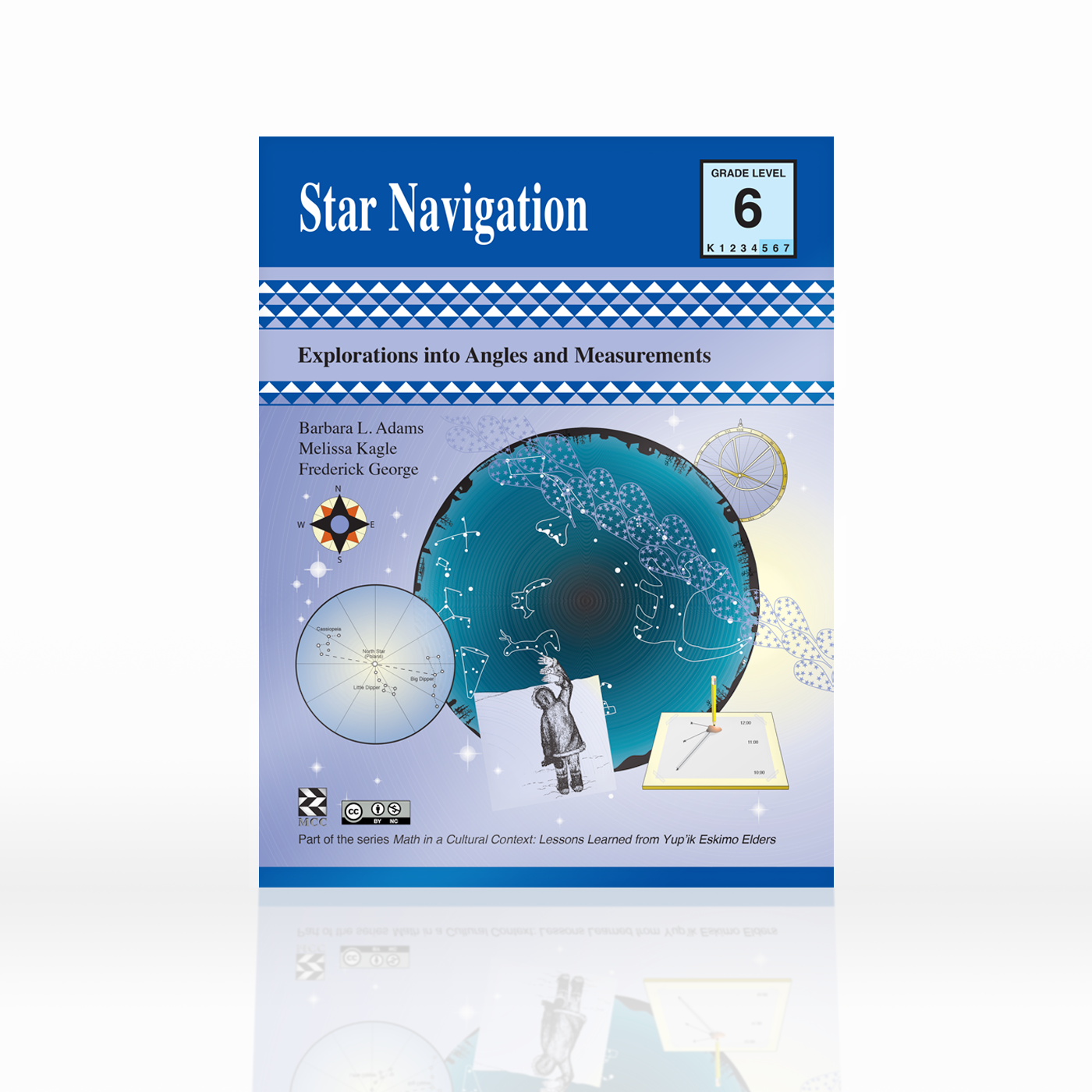 Students in grades five to seven learn ways of observing, measuring and navigating during the day and at night, including specific details of the location and orientation of the Big Dipper and Cassiopeia. They refine their understanding of angle measurements and how they differ from linear measures throughout the activities. The mathematical goal of this module is to give students a strong conceptual sense of angles.

Measurement concepts of units, distance, and the process of measuring. Number concepts of ratio and proportion, geometric concept of similarity.

The traditional Yup’ik practice of using angles and stars (or the sun) to determine location, direction, and distance provides the overall cultural context of this module.

This work is licensed under a Creative Commons Attribution-NonCommercial 4.0 International License.  | Back to Top 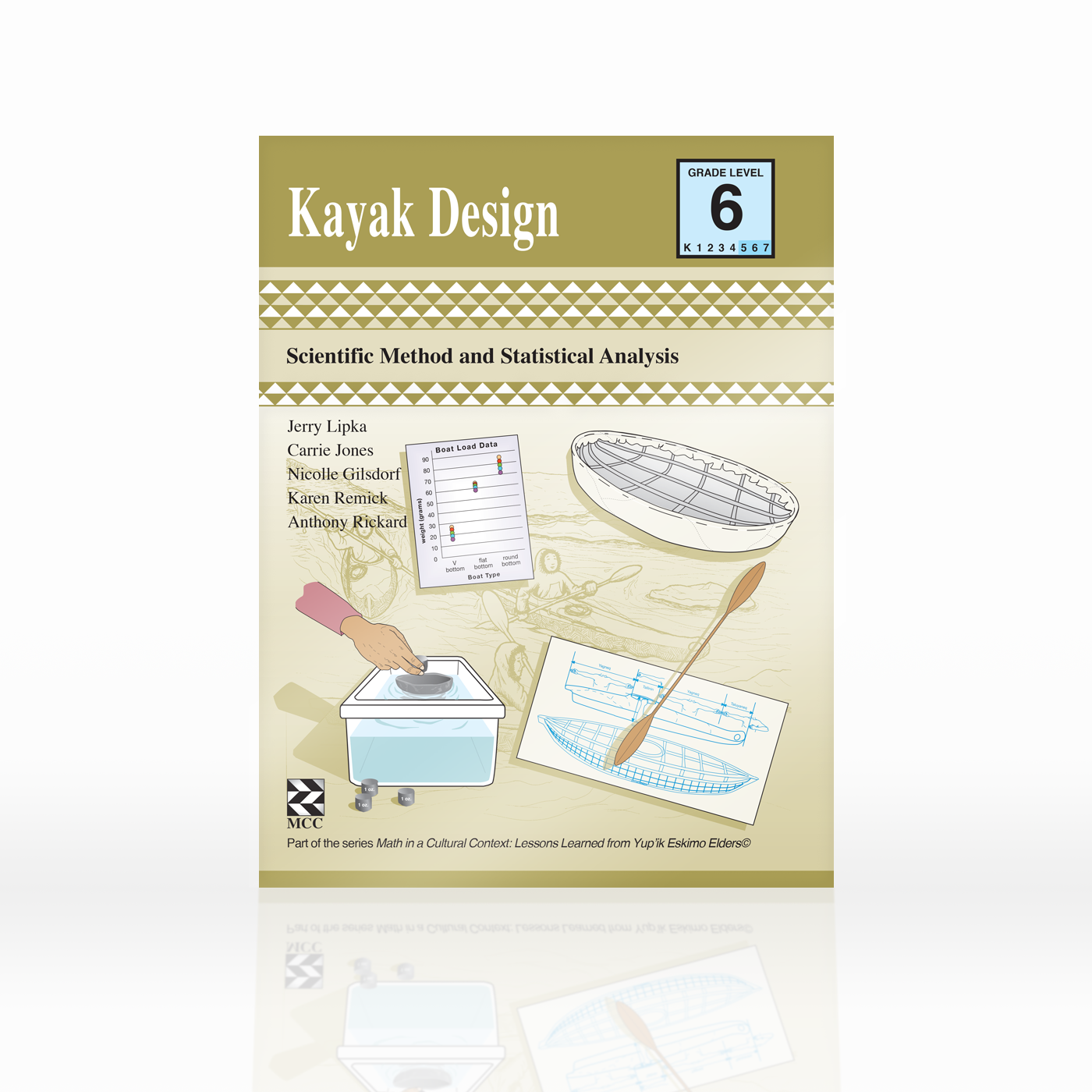 Through creating simple clay kayak models, students in grades six and seven are able to investigate the relationship between the kayak’s shape and its function. By exploring these relationships, students are guided into a series of purposeful mathematical investigations using the scientific method. They collect, organize and analyze data by developing tables, converting tables into graphs, interpreting graphs and using basic statistical techniques to determine whether there is a relationship between form and function.

Measurement concepts of units, distance, and the process of measuring. Number concepts of ratio and proportion, geometric concept of similarity.

The traditional Yup’ik practice of using angles and stars (or the sun) to determine location, direction, and distance provides the overall cultural context of this module. 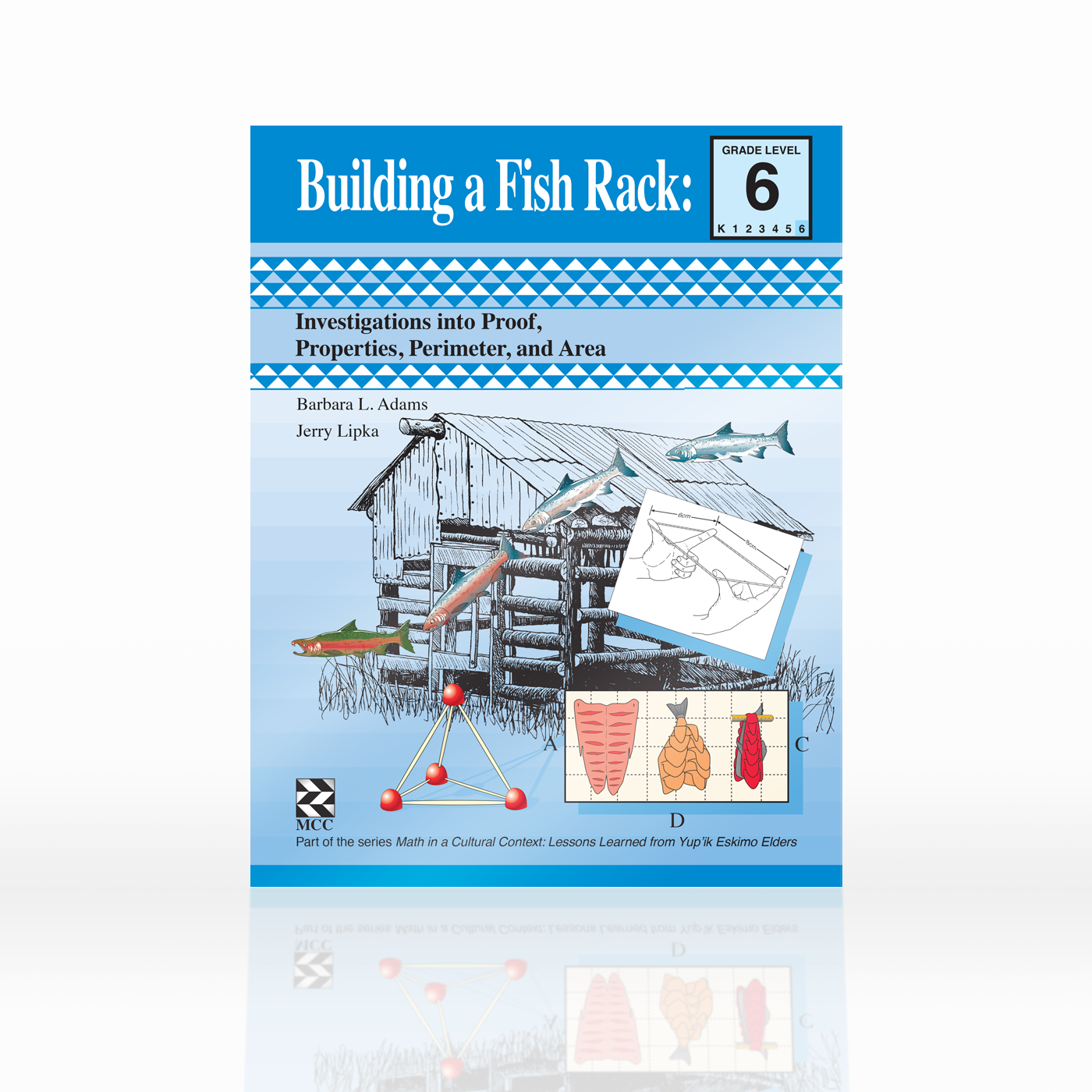 In this module for grade six, formal mathematics are developed through hands-on activities related to building a fish rack for the salmon harvest. Building a Fish Rack provides opportunities to pursue open-ended problems and extended problem-solving projects. Students begin with the overall problem of how to build a fish rack, and from there they explore associated problems such as determining the area for a variety of fish-rack shapes and determining the type of three-dimensional shape that is most structurally stable.

Measurement concepts of perimeter and area; introduction to proving and disproving mathematical conjectures (e.g., use of reasoning, counterexamples). Exploration of the relationships between measures of rectangles (e.g., constant perimeter, varying area).

The subsistence practices of harvesting, preparing, and constructing a fish rack to dry salmon is the overall cultural context for this module. Students learn about fish camp, the role of subsistence in Yup’ik culture, and traditional ways of building a fish rack.

Building a Smokehouse: The Geometry of Prisms (Grades 6–7) 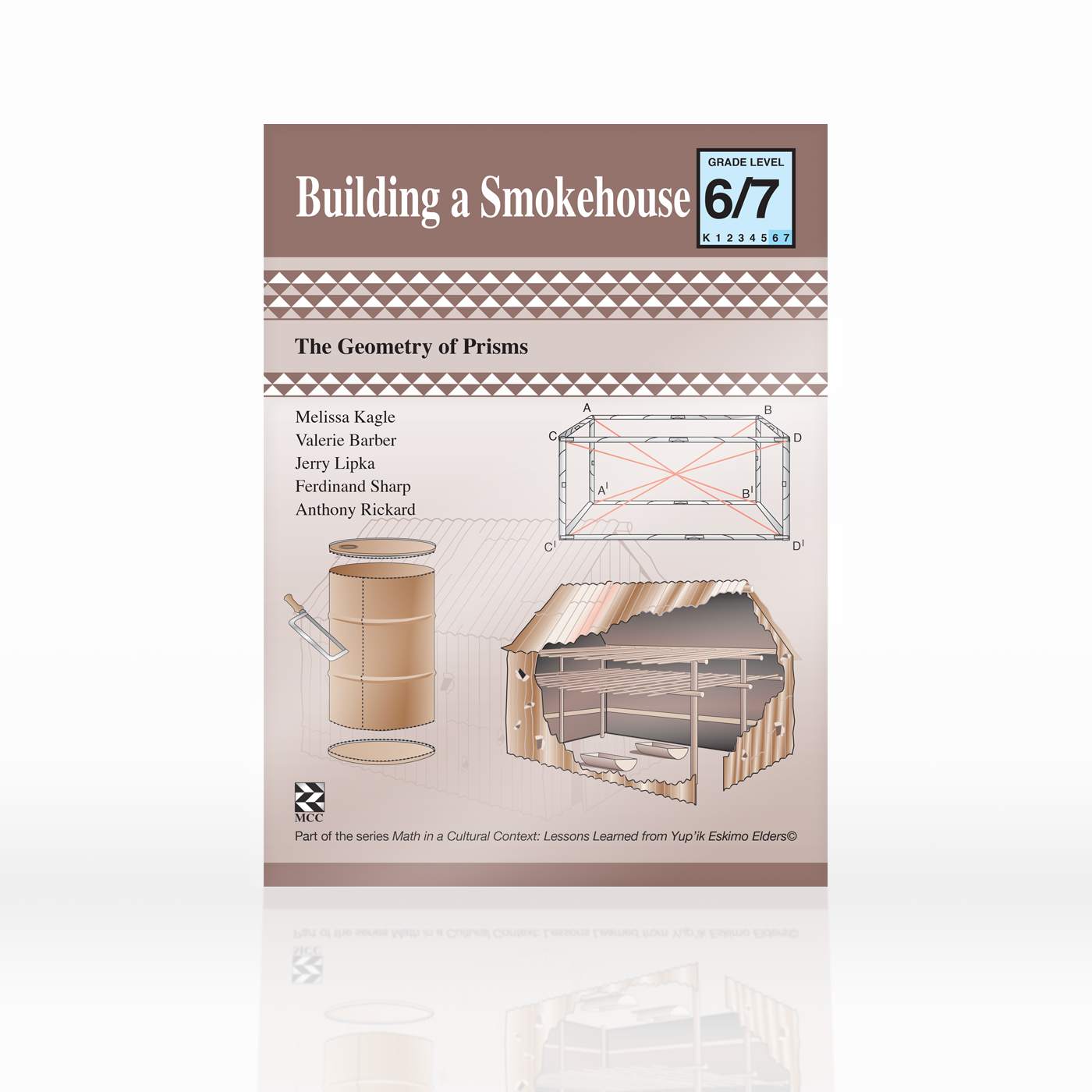 In this module for grades six and seven, students learn how to build a smokehouse modeled after ones currently used by the Yup'ik people. Through this task, students construct models to generalize properties of rectangles to three-dimensional rectangular prisms. Further investigation into triangles and triangular prisms arise while designing roofs for the structures. The hands-on activities lead students to understand prisms in general.

Designing a smokehouse to use to prepare salmon at fish camp provides the overall Yup’ik cultural context for the module. Students use cubes to build models of smokehouses (which are in the shape of a rectangular prism), record their properties (e.g., surface area, volume) and select the best smokehouse design for particular criteria.

This work is licensed under a Creative Commons Attribution-NonCommercial 4.0 International License. | Back to Top Salmon Fishing: Investigations into Probability (Grades 6–7) 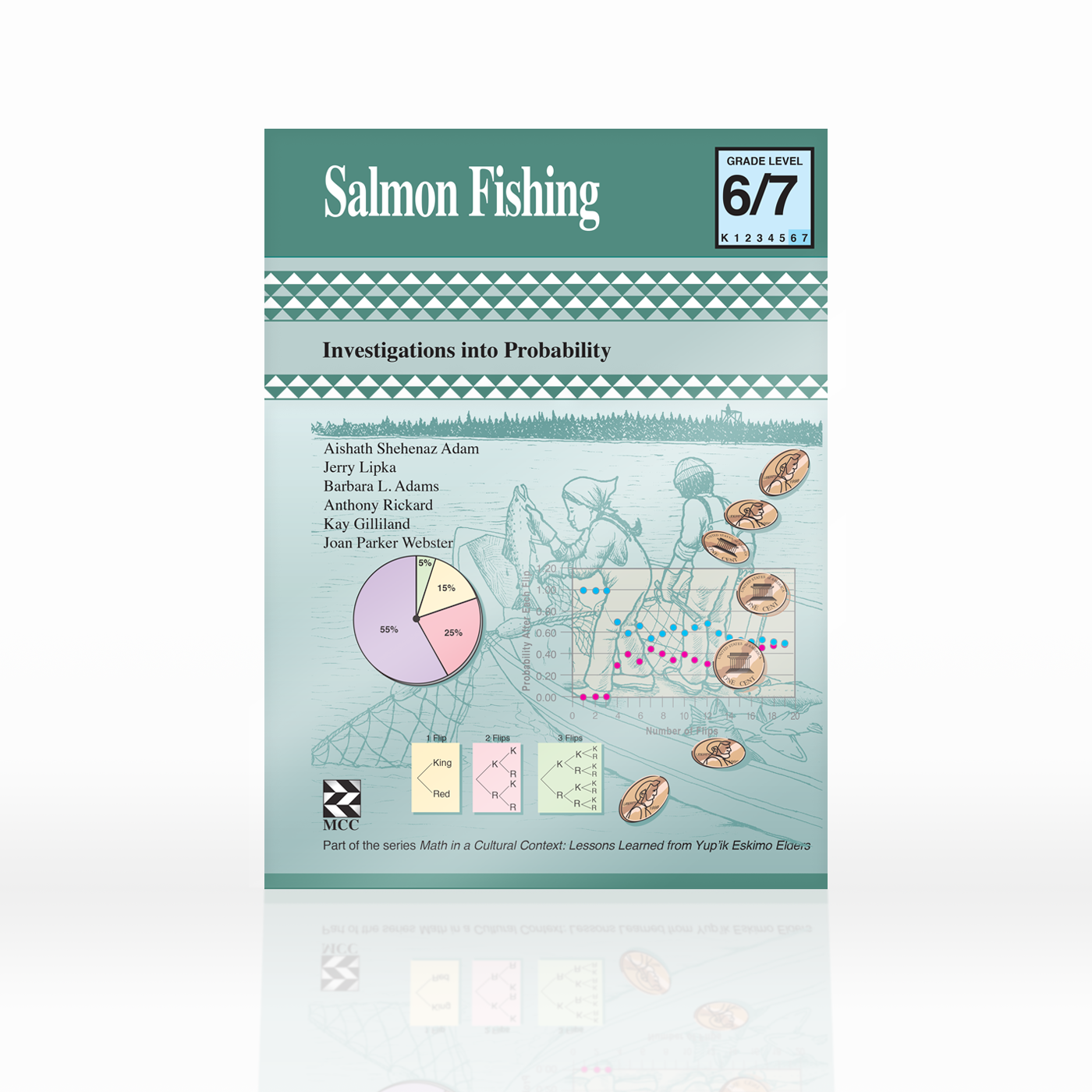 Students in grades six and seven use activities based on subsistence and commercial fishing in southwest Alaska to investigate various topics related to probability, such as experimental and theoretical probability, the law of large numbers, sample space and equally and unequally likely events. The module consists of nine activities, with each activity including an introduction, goals, materials used, preparation needed before class, vocabulary and instructions.

Salmon fishing, particularly in the Kuskokwim, Yukon, and other major rivers in southwest Alaska (as well as in Bristol Bay) provide the major cultural context for the module. Students develop and apply their knowledge of probability to select suitable fishing gear, predict the salmon harvest, learn how state agencies regulate subsistence and commercial salmon fishing. Some traditional Yup’ik games are also provided and students apply probability to analyze the games, as well as develop and refine strategies for playing the games. 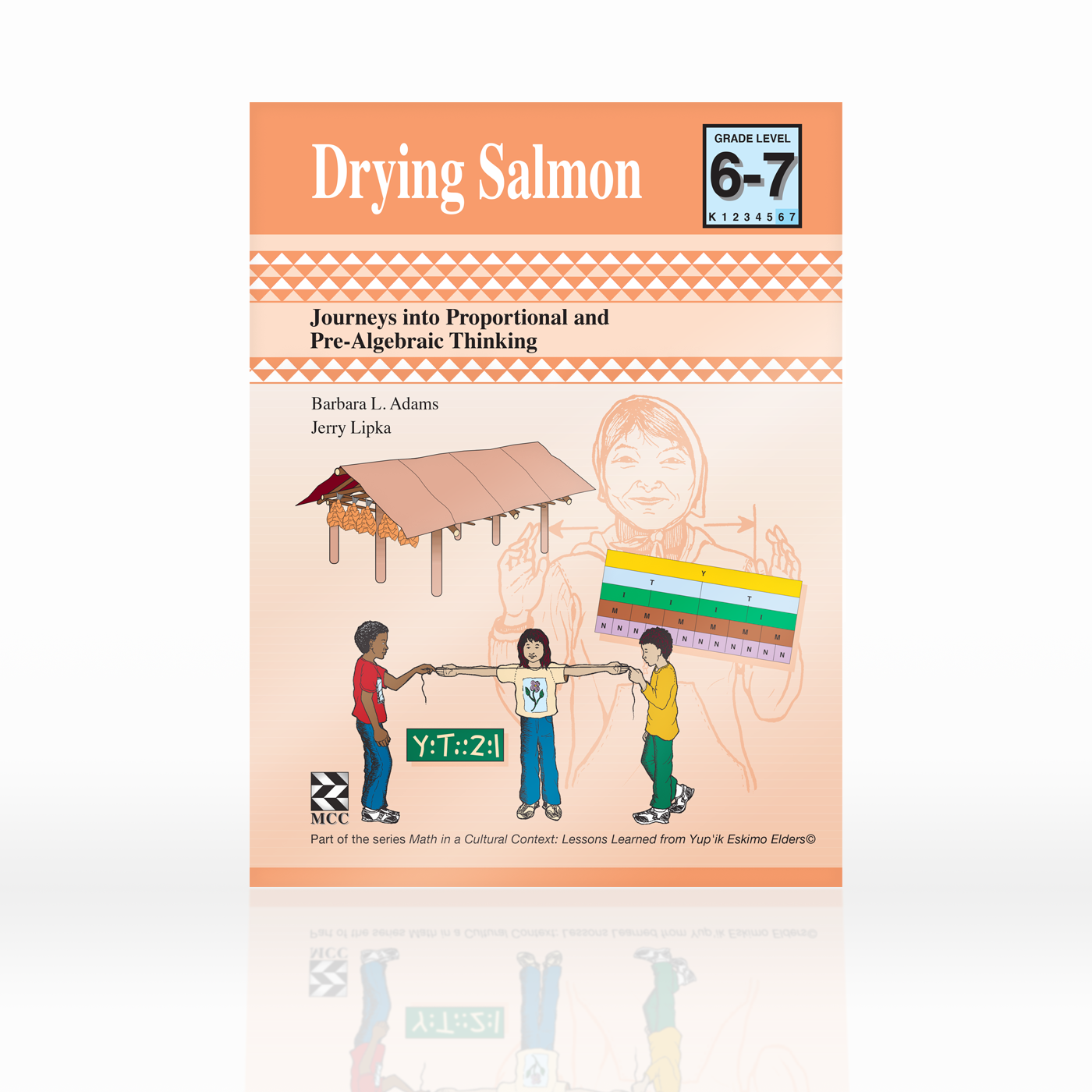 This sixth and seventh grade module explores pre-algebraic and proportional thinking using the unique system of body measures that a Yup’ik elder used when hanging her salmon to dry. Students transform their own measurements into mathematical symbols as a way to investigate variables, relationships, proportions and algebraic thinking.

Built around the Yup'ik subsistence activity of salmon fishing and drying salmon, The late Mary George of Akiachak, Alaska used a unique system of body measure to estimate the relationship of the different types of salmon and their size to her body measure and to the fish rack pole for drying. This formed the major insight into this module.