The Western stock of Steller sea lions was placed on the endangered species list in 1997, and despite years of research, the cause behind their continued decline remains unclear. In addition to increased predation and the junk food hypothesis, declining fecundity rate has been proposed as a proximate driver of the population's inability to recover. Utilizing an early pregnancy detection fecal hormone, our project will identify pregnant females and subsequently track and compare diet composition and stress levels between pregnant and non-pregnant adult females through the final trimester (January - April) at multiple haulouts. This work builds on a preliminary Alaska SeaLife Center study that found diet composition was significantly different between haulouts within Resurrection Bay but no difference was detected in birthing probability between females using those haulouts. This work builds on that study by assessing the relationship between diet and the probability of being pregnant within individual scat samples and between haulout locations. In doing so, we can determine if there is a direct relationship between diet and pregnancy, regardless of the proportions of pregnant and non-pregnant females, using a particular haulout. Our project will further evaluate if fecundity rates are a potential threat to Steller sea lion recovery. 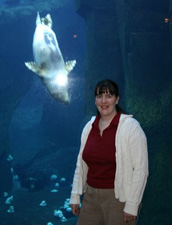