The 2,250-acre Fairbanks campus, located near the center of Alaska, offers limitless opportunities for activity and recreation. The main campus has two lakes and miles of trails as well as a major student recreation complex for indoor sports. Facilities are available for basketball, volleyball, badminton, tennis, calisthenics, dance, gymnastics, judo and karate. There are rifle and pistol ranges; courts for handball, racquetball and squash; a jogging track; a swimming pool; weight training and modern fitness equipment areas; an ice arena for recreational skating and hockey; a special aerobics area; and a two-story climbing wall. UAF sponsors intercollegiate athletics teams in men's and women's basketball, men's and women's cross-country running and skiing, co-ed rifle, men's ice hockey and women's volleyball and swimming.

The Wood Center is the focus of many out-of-class activities. With a pub, snack bar, food court, bowling lanes, conference rooms, lounge and games area, the Wood Center is a gathering place for the entire university community.

UAF has some of the best facilities in the state. Performances are scheduled almost every weekend during the academic year at the Davis Concert Hall or the Salisbury Theatre. The Rasmuson Library, Alaska's largest, has extensive resource materials both in print and online. An array of computer databases provides access to hundreds of academic journals, and Internet connections allow students at remote rural sites to use library resources. The UA Museum of the North is not only one of the top visitor attractions in the state but also a resource for students. Its vast collections are used for demonstration and comparative studies in classrooms and labs.

The Fairbanks campus is the statewide university system's principal research center. Internationally respected research institutes provide students with an opportunity to see research in action and participate in research activities. 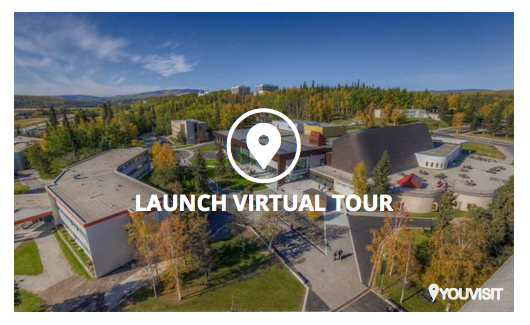 Fairbanks, Alaska's second largest city, sits on the banks of the Chena River in the heart of Alaska. From the UAF campus, the downtown district is easily accessible via the local bus system and a network of bike trails. The city is steeped in a history of riverboat captains and gold seekers. Its character has been shaped by a large military presence, construction of the Trans-Alaska Pipeline and the continuing oil economy, and a thriving university. It is a city where old quietly blends with new. Striking modern buildings sit side-by-side with log cabins built in the early part of the last century.