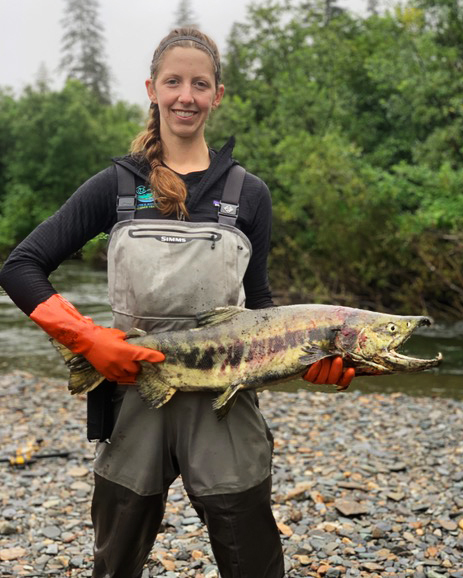 Originally from the Seattle area, Molly received her B.S. in Aquatic and Fishery Sciences from the University of Washington in 2018, spent a year living and teaching in southern Spain, and then came to Alaska to work for the Sitka Sound Science Center on the Alaska Hatchery Research Project field crew. That led her to the Westley lab at the University of Alaska Fairbanks in 2019, where she is currently working toward her M.S. degree in Fisheries.

Molly is using data on chum salmon stray rates in Southeast Alaska from the Alaska Hatchery Research Project (AHRP) to identify factors that make streams attractive to hatchery strays. Chum salmon hatcheries in the region release millions of juvenile chum salmon every year and many of these hatchery fish end up on spawning grounds with wild salmon as adults, allowing for competitive and genetic interactions to occur between hatchery and wild fish. Since these interactions are typically harmful to wild salmon populations, straying of hatchery fish onto spawning grounds ought to be minimized as much as possible. Preliminary analysis of the AHRP data and data from other peer-reviewed studies reveals that some streams are more attractive than others to hatchery salmon strays for reasons that are not well understood. Using data from a variety of sources (other peer-reviewed studies, hatchery release data), Molly is developing a model to predict stream attractiveness to hatchery chum strays based on factors such as stream distance from hatchery release sites, stream flow and temperature, and population size of the stream. The results of this project will be incorporated into a spatial management tool built in a GIS platform to be used by hatcheries and fisheries management in Southeast Alaska to identify release site locations that are far away from attractive streams so as to minimize straying of hatchery chum salmon.

Links to Other Places