The Academic Advising Center is Here for You

Our accessible advisors are equipped to answer all of the important questions you'll have when working toward your degree at UAF.

We offer genuine support when your semester turns out more challenging than you may have planned and we have the expertise and encouragement you are looking for to help you make educated choices when choosing the most valuable courses for your academic goals.

Our Team of Academic Advisors Advisor specializing in Credit for Prior Learning, Academic Difficulty/Disqualification and Supporting AAC Advisors

Ginny Kinne was born and raised in Rochester, New York. She graduated with a BA in Journalism with a minor in Spanish from UAF. Not ready to leave UAF, she spent the next several years serving as the New Student Orientation Coordinator, an Admissions Counselor, an Academic Advisor, and later becoming director of the Academic Advising Center. During her time in the Advising Center, she finished her MEd in School Counseling (K-12) also from UAF.

Ginny is married to a land surveyor (who she met in Fairbanks, but grew up 3-hours south of her in upstate New York), and has a son, a younger daughter, two dogs, and a cat. When not in the office she enjoys knitting, cycling, sewing, baking, experimenting with sourdough, food preserving, beekeeping, listening to live music, and enjoying good coffee. Lena was born in Russia and at age 3 moved to the US, where she grew up in Texas and New York. After getting a BA in Geology, she worked and traveled throughout Antarctica, New Zealand, and the Southwest US.

Seeking blue skies, plentiful trails, and affordable rent, she came to UAF to pursue a MS in Geology and later, a State of Alaska teaching certificate. Lena enjoys exploring and learning new things. Outside of the office, she can be found skiing, biking, and running on the trails or reading, baking, taking photos. She adores her almost 9-year old son, husband, and two tuxedo cats. Carrie was born and raised in Western Washington. Her first visit to Alaska was as a 19-year-old when she started working seasonal jobs at remote fly-fishing lodges near Aleknagik and Lake Iliamna. She loved it so much that she returned every summer throughout college. Carrie earned a BS degree in Geology while playing centerfield on a softball scholarship at Central Washington University.

Soon after graduating, she moved to Fairbanks in 1999 and eventually worked as a geologist with the Alaska Division of Geology & Geophysical Surveys while her husband completed graduate degrees in geology from UAF. She moved with her husband to California in 2005. Carrie and her family returned to Fairbanks in 2020 after many years of wanting to move back to this interesting community. She has recently moved back to California with her family and is enjoying her role as a virtual advisor for our group.

She loves spending time with her family in the outdoors hiking, running, exploring and she personally enjoys photography, cooking, playing soccer, knitting, singing, and writing. Stacey was born and raised in Western Washington and moved to Alaska over 30 years ago with her husband, Steve. They lived the first 10 years in Anchorage, finally settling in Fairbanks in 1989 to make a home and raise their family. As a university staff member since 1990, she is committed to serving UAF students, faculty and staff with great enthusiasm.

In addition to her position in the Academic Advising Center, Stacey is currently working toward a BA in Art. “I study the natural world through sculpture and enjoy the beauty and bold contrasts that life in Fairbanks can bring”. In her spare time, Stacey enjoys time with her family, friends, art and gardening. 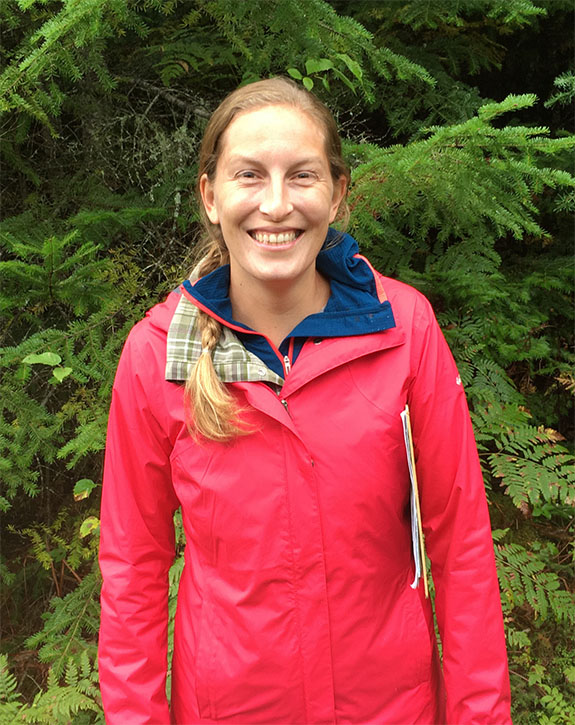 Study Away Manager and Advisor

Advisor specializing in Incoming and Outgoing Study Away Program students

♦ Curious about where you could study away?
visit: studyabroad.uaf.edu

Nicole grew up in eastern Nebraska, earning a B.S. in Animal Ecology-Interpretation from Iowa State University and an M.A. in Applied Linguistics from UAF.  She did an exchange to UAF through the National Student Exchange (NSE) in the spring of 2006, where she met her now-husband. Upon finishing her degree, she joined her husband on his exchanges to Portland State University (through NSE) and Finnmark University College (in Alta, Norway through north2north), and finally moved back to Fairbanks in 2008. She lives with her husband and two Bernese Mountain Dogs, Bernie and Colin. Schedule an Appointment
Learn more
Nicole Goff was raised in the hot and sunny state of Arizona. She attended Arizona State University, graduating with a bachelor's degree in elementary education. Nicole then spent the next 5 years teaching 5th, 4th and then 1st grade. She received her master's degree in curriculum and instruction in March of 2020.
In June of 2020, Nicole and her husband made the big move to Fairbanks. Nicole's husband received a wonderful job opportunity here in Fairbanks and together they decided building their life in Alaska was a wonderful adventure to embrace! Nicole worked for the Fairbanks North Star Borough School District as a 1st grade teacher for one year, before deciding to make the shift to higher education as a Career and Academic Advisor here at UAF.
When not in the office, Nicole enjoys spending time with her husband, friends, and her three dogs: Bjorn, Odin, and Freyja. She also spends much of her free time exploring new places, enjoying new restaurants, reading a good book, and spending time outside. Nicole considers herself a lifelong learner, and always enjoys learning new things.

Our Staff and Student Employees Michael was born in California, but is from all over having lived in New Mexico, California, Hawaii, Texas, New York, Okinawa, and Alaska. He came to UAF to pursue his Bachelor's in Biology. Aside from brightening people's days, he enjoys swimming in rivers, ethnobotanical studies, meditation, and oriental cooking.

Where You Can Find Us...

We are currently scheduling in-person, phone or Zoom appointments

The Academic Advising Center is physically located in 510 Gruening

Curious about where to find parking for visitors, students, staff and faculty? Visit the Parking Services webpage.