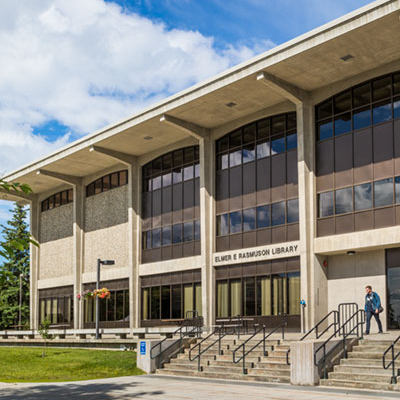 The Elmer E. Rasmuson Library is Alaska’s largest, with more than 1.2 million items, including books, periodicals, films, sound recordings, microforms, government documents, maps, manuscripts and archival materials, as well as electronic access to more than 20 million titles worldwide. The Rasmuson Library has one of the world’s finest collections of Alaska and polar regions materials, including books, periodicals, photography, manuscripts, films, oral histories, rare books and maps. The collections are centered on Alaska but include many items about the circumpolar North and Antarctica.

Elmer E. Rasmuson was born in Yakutat, Alaska, in 1909. He graduated from Harvard University in 1930. Rasmuson returned to Alaska in 1943 as president of the National Bank of Alaska, the first statewide banking system in Alaska. Active in public affairs, Rasmuson was mayor of Anchorage, chairman of the Alaska Permanent Fund Corp. and a member of the University of Alaska Board of Regents from 1950-1969.