Choir of the North 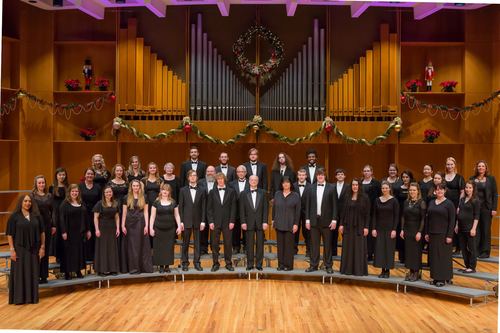 The Choir of the North is composed of approximately forty to fifty voices selected by audition from the University of Alaska Fairbanks student body. Organized in 1957, it is one of the longest standing choral organizations in the state of Alaska. The primary mission of the Choir of the North is to provide a musical training ground for those students preparing to become professional musicians and music educators, many of whom will stay and teach in the Alaska public school systems. For students with other majors, the Choir provides an outlet for their musical abilities while they pursue their major areas of study. The Choir of the North performs a wide variety of choral music. Included in its repertoire have been such standard works as Bach's cantatas and motets, Brahms' Zigeunerlieder, Britten's A Ceremony of Carols, the requiems of Mozart, Durufle and Faure, Byrd's Mass for Five Voices, and newer works such as Rutter's Gloria and the unusual The Unicorn, the Gorgon, and the Manticore by Menotti. Russian choral music has long been a staple of the choir's repertoire. Recently performed works include Rachmaninoff's All Night Vigil (Vespers) and a scene from Rimsky-Korsakov's opera Christmas Eve. Since its organization and in addition to regular concerts on the UAF campus, the Choir has made several Alaskan and Pacific Northwest tours and has visited Europe. The Choir of the North performs periodically with the Fairbanks Symphony Orchestra and the Arctic Chamber Orchestra. Performances by the Choir of the North have been selected for national broadcast on the KUAC "Intrada" series, and the Choir's recording Carols of Christmas has been released by Golden Crest Records.

The Fairbanks Symphony serves a dual purpose of serving the Alaskan Interior as a community orchestra and also being the UAF for-credit orchestral ensemble. Enrollment is also possible in the Arctic Chamber Orchestra for advanced music students. Enrollment in the Fairbanks Symphony fulfills the major ensemble requirement for UAF music majors. An audition is required for enrollment in both ensembles. For more information, visit the Fairbanks Symphony Orchestra's website. The Symphony Office hours are 10 AM - 5 PM Monday through Friday. The office is located in the Regents Great Hall, adjacent to the concert hall. You may phone or fax the office at 907-474-5733, or send an e-mail to info@fairbankssymphony.org. 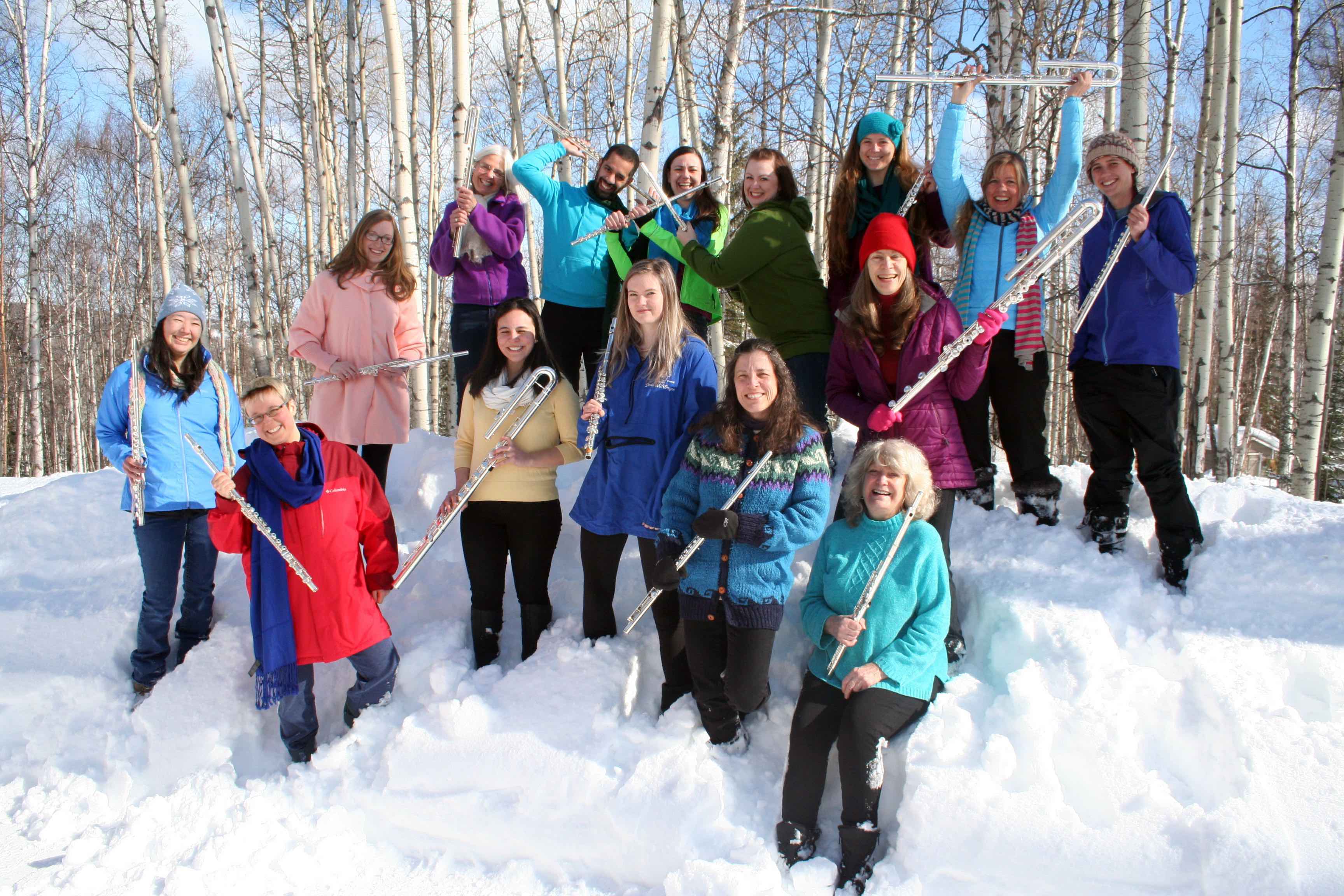 The UAF Flute Ensemble is open to all interested flutists who are music majors and other members of the university community. It is conducted by Dorli McWayne, flutist on the UAF faculty and principal flutist with the Fairbanks Symphony Orchestra. The group meets once a week at a time to be determined by the schedules of the respective members. Literature is varied and there is an opportunity to learn ensemble skills on all members of the flute family: piccolo, C-flute, alto, and bass. Some previous experience is necessary.

The "Fairbanks Flutists" is a select group of 12 to 20 players from the University and the community. Advanced flute students are invited to audition for placement in the ensemble and can receive credit for Music 307. The group has given one to four recitals every year since its founding in 1981, in venues all around Fairbanks from the public schools to the Carlson Center to the UA Museum. They have collaborated with internationally known flutists Carol Wincenc, Trevor Wye, John Barcellona, and Louise DiTullio for the Fairbanks Symphony's Recital series. Since 2003, the group has given well-received performances at the National Flute Association's Annual Conventions in Las Vegas, Pittsburgh and Salt Lake City. 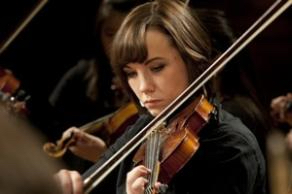 The Northern Lights String Orchestra, under the music direction of Dr. Bryan Hall, is dedicated to the performance of large and small-scale works written for string orchestra. The group has explored the gamut of string orchestra repertoire from early Baroque through contemporary literature. The NLSO also adds wind, brass, and percussion as needed to perform works for full orchestra. It had its beginning as an outgrowth of the North Star Strings, as advanced members were interested in a more intense string orchestra experience. The North Star Strings is a group of adult string players who operate under the umbrella of the Fairbanks Symphony organization. The members of the NLSO benefit from an in-depth experience in string techniques as they relate to orchestra playing.

The NLSO is comprised of music majors and minors, students in other disciplines, and community members. The group has been in existence for over fifteen years, has featured student soloists, local soloists, and has supported performances by the Choir of the North and the UAF Opera Workshop. 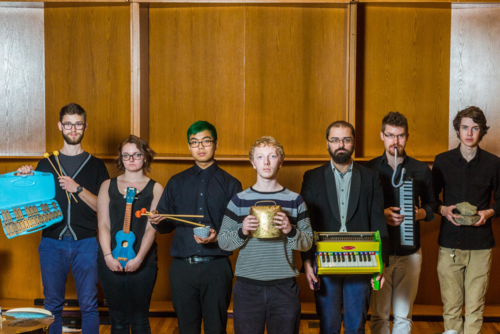 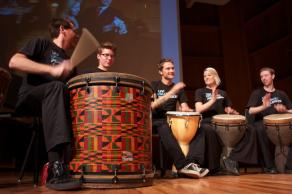 Ensemble 64.8 is directed by Eric Retterer and is the resident percussion lab at the University of Alaska Fairbanks. Dedicated to experimentation and exploration, the group performs chamber music with an emphasis on works by noted American and European composers. The group is also dedicated to performing the music of living North American Composers. Some of the composers represented in the current ensemble repertory include Steve Reich, John Cage, Toru Takemitsu, John Wyre, Louis Andreissen, Robin Engelman, Giacinto Scelsi, Carlos Chavez, John Luther Adams, and Henry Cowell.

The 2007/08 academic year found the group performing in New York City with Valerie Naranjo, as well as performing in conjunction with noted composers Christopher Adler and Alaskan, Matthew Burtner. Members of the group also performed at the 2005 Percussive Arts Society International Convention in Columbus, Ohio.  The 2008/09 academic year featured an Alaskan concert tour with renowned percussionist Bob Becker, and a spring concert featuring the percussion works of Iannis Xenakis. In 2010, the group traveled to Indianapolis to premiere six new percussion quintets as a part of the larger telematic opera, Auksalaq (composed by Matthew Burtner), performed at the Percussive Arts Society, Alaska Day of Percussion, the UAF Collaborative Arts Festival, and both the Chancellor's Convocation and UAF commencement ceremonies. Ensemble 64.8 was also featured on Focus Day at the 2010 PASIC, the Percussion Repertoire Festival in Lulea, Sweden, and the Kroumata Theatre, Stockholm, March 2011. The group performed at the Alaska premiere of the Len Kamerling/John Luther Adams documentary film, "Strange and Sacred Noise," and was a guest ensemble with the Arctic Chamber Orchestra performing Shchderin's "Carmen Suite." More recent engagements include concerts at The Music Gallery in Toronto, Canada, and the Open Ears Festival in Kitchener/Waterloo, Canada (May 2012).

Ensemble 64.8 is also proud to be invited by Chancellor Rogers to perform yearly at both the UAF commencement ceremony and the Chancellor's Convocation.

Enrollment in Ensemble 64.8 is comprised of degree seeking students with a percussion major or minor and is reserved for Junior level or higher percussionists. An audition is required for entrance into the ensemble. For more details contact Sean Dowgray. 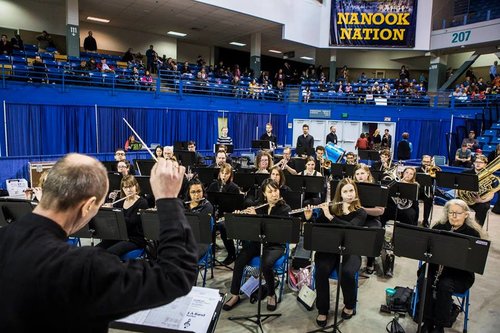 The UAF Wind Symphony has a long tradition of performance on campus. Students performing in the Wind Symphony will experience a wide variety of band literature designed to explore many genres and styles of music from classic wind band literature to more contemporary compositions. The group performs a concert each semester in the C.W. Davis Concert Hall and participates in the Spring Commencement Ceremony.

All UAF students who have an interest in keeping music a part of their University experience, not just Music Majors, are encouraged to register for the Wind Symphony. Contact George Rydlinski, 474-5852 or grydlinski@alaska.edu for further information. 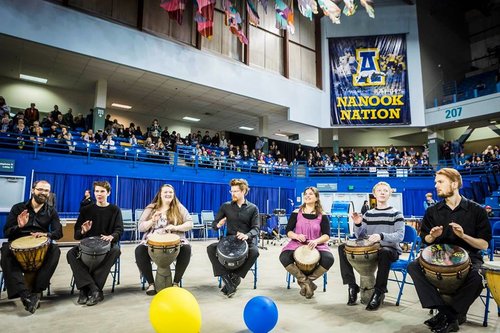 The World Beat Ensemble is a hand drumming group that performs music of West Africa, Brazil, Cuba, as well as original compositions. The aim of the course is to build skills in hand drumming technique, rhythm, and familiarity with various stylistic traits of drumming from around the world. The ensemble rehearses once a week, and performs regularly in the Fairbanks area. Enrollment in the ensemble is open to advanced and beginning players, both degree and non-degree seeking.

Nanook String Quartet is the premiere student string quartet of the UAF string department. It is a group of dedicated UAF student musicians with a passion for music making in the Last Frontier who participate in the String Chamber Music Course.

Their mission is to share in the appreciation, performance, and study of chamber music with the Fairbanks community and the greater state of Alaska. UAF music students, music minors, and non-music major students at UAF, former students, and occasional faculty collaborations form the group.

It also fulfills professional coaching obligations for the String Fling held at UAF.

Contact Dr. Bryan Hall at behall2@alaska.edu for more information about hiring the quartet or joining the group.

The Alaska Trio was founded in 1974 as a faculty ensemble of the University of Alaska Fairbanks. It has metamorphosed through a series of personnel changes into its present members of pianist Eduard Zilberkant, violinist Bryan Hall and cellist Ryan Fitzpatrick. The Trio has concertized in Hawaii and the Pacific Northwest, and has played many Alaskan tours including performances of the Beethoven Triple Concerto with the Fairbanks’ Arctic Chamber Orchestra, the Juneau Symphony Orchestra and the National Symphony Orchestra in Washington D.C.  In addition to performing the standard repertoire, the Alaska Trio is active in the exploration of little-known works, old and new. When joined by violist Gail Johansen and clarinetist Theodore DeCorso, the group becomes the Alaska Chamber Players.  This group made its first recording, released nationally on the ORION label, of previously unrecorded works by Beethoven, Reinecke, and Ireland. The members of the Alaska Trio and Alaska Chamber Players are active individually as well as collectively as performers, clinicians, and teachers.