Overview of the Eyak Language

Eyak is not an Athabaskan language, but a coordinate sub-branch to Athabaskan as a whole in the Athabaskan-Eyak branch of the Athabaskan-Eyak-Tlingit language family. Eyak was spoken in the 19th century from Yakutat along the south central Alaska coast to Eyak at the Copper River delta, but by the 20th century only at Eyak. It is now represented by about 50 people but no surviving fluent speakers. With the passing of Marie Smith Jones (pictured above with linguist Michael Krauss) on January 21, 2008 Eyak became the first Alaska Native language to become extinct in recent history.

The name Eyak itself is not an Eyak word but instead derives from the Chugach Eskimo name (Igya'aq) of the Eyak village site near the mouth of Eyak River (Krauss 2006:199). The Chugach word Igya'aq is a general term referring to 'the outlet of a lake into a river.'

Comprehensive documentation of Eyak has been carried out since the 1960s by Michael Krauss, including his edition of traditional stories, historic accounts, and poetic compositions by Anna Nelson Harry.

In the early part of the 21st century there was a growing interest in Eyak langauge revitalization. More information on these efforts can be found at the Eyak Language Project .

Robert Austerlitz (b. 1923, d. 1994) did field work in Situk and Cordova for approximately one month in 1961. At least eight recordings, made on 3 inch reels, survive from this time. 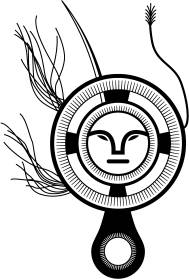 Support for digitization, enhancement, and completion of Eyak language reference materials is provided by a grant from the US National Science Foundation, Office of Polar Programs, Arctic Social Sciences Division (#1003160, PI Michael Krauss).