On February 22, 2013 ANLA joined Rasmuson Library to dedicate its new space on the 2nd floor of the library as the Michael E. Krauss Alaska Native Language Archive. The new name honors the founder of the collection, who worked for several decades to grow the collection to the most comprehensive indigenous languages resource in the world. [read more]

ANLA collections include both published and unpublished materials. Original records include linguistic field notes and audio and video recordings. Published materials include books, reprints, copies of materials held in other archives, and copies of Alaska Native Language Center publications. The Archive reading room also houses reference materials which support research with these collections. The uniqueness of this collection lies partly in this concentration of materials.

The value of the materials housed in the Alaska Native Language Archive derives at least in part from the comprehensive nature of the collection. Hence, the Archive strives to acquire as many materials in and about Alaska Native languages as possible. However, the Archive also recognizes that sufficient resources may not be available in the future to maintain a comprehensive collection. With this in mind, several principles of acquisition prioritization have been established. Acquisition must balance potentially competing priorities along the essentially independent parameters of source language, content type, and publication status.

Publication status
While the Archive strives to be comprehensive, a priority is placed on items which are not available in other collection, as follows in decreasing order of priority.

Audio and Video
The Archive does not actively acquire individual recordings but rather serves as a repository for substantial, significant collections relating to identified documentary or pedagogical projects. 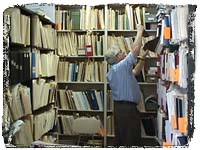 Today the Archive has grown to house more than 15,000 documents, including nearly everything written in or about any of the twenty Alaska Native languages. The Archive also contains a significant collection of audio recordings dating to the 1940’s, including some of the earliest recordings of Alaska Native languages. The comprehensive nature of the collection—bringing together unpublished manuscripts and copies of archival documents, as well as published materials—has been repeatedly recognized as unique and valuable.

The Archive is overseen by an external advisory board representing the diverse regions of Alaska. The board works together with the Archive Director and the staff of the Alaska Native Language Center in order to ensure that the collections are both preserved for future generations and made accessible to language education and revitalization programs.

The Archive is located on the campus of the University of Alaska Fairbanks and is open to the public for research and educational purposes. Efforts are currently underway to increase access through digitization of audio and text materials. A container list is accessible online, and portions of the collection are accessible via web portals tailored to individual languages. The Archive also continues to partner with Native organizations to facilitate local access in remote regions.