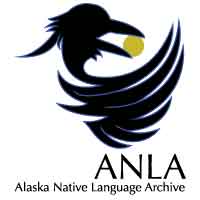 All materials in the Deg Xinag collection are either written in or about the Deg Xinag language, known also as Deg Hit'an or Ingalik (the latter term is consider pejorative). The earliest documents date from the mid to late 1800s and contain ethnographic accounts and some information on personal and place names.  A significant part of the collection includes materials from the late 1800s to the mid 1900s and consists of traditional and religious texts, church records, fieldnotes and published reports of linguistic and ethnographic fieldwork. From the 1960s to the present, significant contributions have been made by staff at ANLC, including especially Michael Krauss and James Kari.  Most of the materials relate to lexical studies, although there are a number of works on the phonology, grammar, and dialects, and traditional and religious texts are well represented; there are relatively few educational materials.  Some of the collection consists of photocopied material representing original material held by other repositories, and certain reproduction and use restriction apply.

Deg Xinag (also known as Deg Hit’an, formerly known as Ingalik) is the Athabascan language spoken in Shageluk, Anvik, and Holy Cross, below Grayling on the lower Yukon River; there was also a separate dialect spoken by people living along the Kuskokwim at Stony River.  Of a total population of about 275 people, about 40 speak the language.

The scope of the Deg Xinag language collection is quite broad in that it strives to include all material written or published in or about the Deg Xinag Language.  Dr. Michael Krauss made an effort to collect all things Deg Xinag, and has developed a nearly comprehensive collection.

The earliest documents date from the mid to late 1800s and contain ethnographic accounts and some information on personal and place names (5 items).  The first significant documentation of Deg Xinag is the work of John W. Chapman (represented by about 15 items in the collection), from 1887 to 1948, and includes the first texts collected in the language, with interlinear translations, wordlists, translations of the Gospels and other religious materials, ethnographic information, the first dictionary, and personal and place names, as well as some correspondence with Jules Jetté.  Chapman and Jetté, both men of the Church, were important documenters for a number of Athabascan languages.  In addition to Chapman’s work, there are a number of other religious texts from this period  (ca. 13 items), including a number of sermons and translations by Joseph Perron.  Most of these materials are photocopies of originals (both manuscripts and published works) held in various other repositories.

There are also ca. 10 items from 1900-1960 of ethnographic materials by well-known researchers, such as Sapir, Osgood, de Laguna, Hoijer, and Zimmerman, which also include wordlists, placenames, and some notes on the language.  The bulk of the linguistic documentation, however, dates from the 1960s to the present, with significant contributions made by staff at the Alaska Native Language Center.  Michael Krauss (7 items) produced studies of Deg Xinag phonology and the lexicon, and collected some traditional stories.  The largest part of the collection (ca 20 items) reflects the fieldwork of James Kari, covering the period from 1974 to 2005, on the lexicon, placenames, some studies of verb stems and aspect, and texts.

There are relatively few educational materials (ca. 6 items), which relate largely to efforts to develop an orthography and literacy in the 1970s.  James Kari, Jeff Leer, and Michael Krauss were all involved in this work, and Kari’s materials from literacy workshops are also included in the collection.

Languages: Collection languages are primarily Deg Xinag and English, although one or two of the early materials are in Russian or German. Some documents offers Deg Xinag words in comparison to other Athabaskan languages in Alaska.