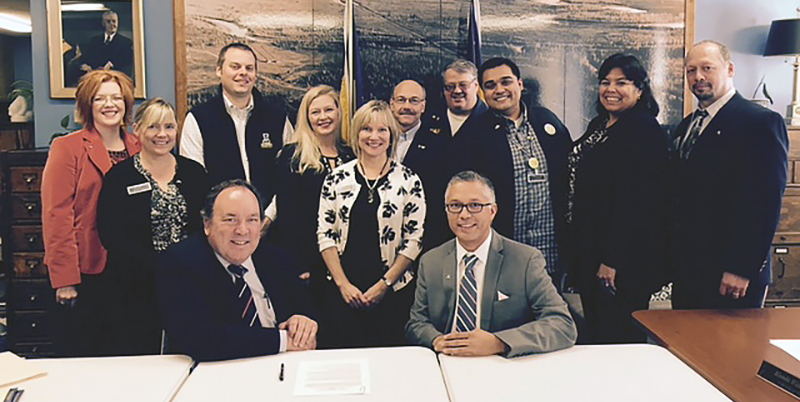 The UAF Alumni Association and UAF have approved a cooperative and operating agreement that not only affirms the long history of collaboration between the two entities but also more clearly defines roles and responsibilities. The goal is a mission-focused, integrated alumni relations program that will serve UAF and its alumni well into the future.

The agreement was approved by the nonprofit alumni association's board of directors at its Sept. 25, 2015 meeting, and was signed by UAFAA President Sam Enoka `95 and Interim Chancellor Mike Powers. The mood at the signing was jubilant. After the signing, everyone enjoyed a toast of sparkling apple cider to celebrate.

The Memorandum of Agreement clearly defines roles and responsibilities between the two entities in a number of different areas. Lack of clarity in the past had led to some different interpretations and disagreements between the association and UAF. The new MOA replaces a version that was signed back in 2005. While that document served UAF and the nonprofit well for a time, everyone agreed it was in need of updating.

The signing ceremony culminated many hours of hard work by the 2014-2015 board, as well as UAF staff.

The agreement itself was one of several key recommendations put forth by a task force of prominent alumni appointed in the spring of 2014. The task force, dubbed the 21st Century Alumni Relations Task Force, was chaired by alumnus John Davies. The task force offered broad recommendations aimed at a comprehensive alumni relations program that is relevant to UAF alumni, aligned to UAF strategic priorities and financially sustainable.