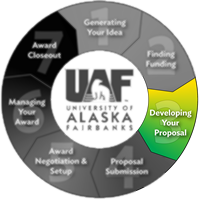 Find out from the application guidelines or funding agency all the established budget regulations including:

Allowable Direct Costs - What items can be charged to the agency? Will the agency pay for salaries for principal investigators or project managers? Will it pay for outside consultants? Travel both inside and outside the United States? What are the rules about purchasing equipment?

Facilities & Administrative Costs (also called F&A, indirect costs, overhead) - Indirect costs pay for office and laboratory space, heat and lights, library services, administrative and other costs. Every institution is assigned a federal agency with whom it negotiates an indirect cost rate (every three years for UA), based on the previous three years of transactions. No institution arbitrarily sets its own indirect cost rate. The negotiating agency for the University of Alaska is the Office of Naval Research. UAF's current F&A rates can be found here.

In preparing a proposal budget, the F&A costs are computed on what is called the Modified Total Direct Costs (MTDC) base. Per UA's negotiated agreement, in keeping with the Uniform Guidance definition, MTDC excludes "equipment, capital expenditures, charges for patient care, rental costs, tuition remission, scholarships and fellowships, participant support costs and the portion of each subaward in excess of $25,000."
»
In instances where agencies will not pay F&A costs or pay at rates lower than our negotiated rates (and so state in their guidelines), the university will accept the conditions. A statement from the agency or a copy of the pertinent portion of the guidelines must be included with the proposal when it is sent to the OGCA Pre-Award staff.

Cost Sharing/Matching - Some sponsors require that some part of the cost of a project be borne by the applicant institution. This is usually provided by pledging some portion of personnel salaries with related fringe benefits, and in some cases, indirect costs.

Other sources of cost sharing can be used, but they must be carefully documented for auditing purposes. If the agency does not require cost sharing or a match, do not propose it. The University will be held accountable for the commitment. Contribute only what is required.

Minimum-Maximum Range - Before preparing a proposal and budget, determine what would be an appropriate amount to request. The guidelines usually will tell state the maximum amount allowed. Request the maximum if it's justifiable, but never request more money than the program allows.

Identify the Total Costs of the Project

Developing the budget is an excellent test of how clearly and completely the project has been described. The principal investigator should be able to work through the narrative of the proposal and identify the costs to be included in the budget.

When preparing the proposal budget, do not directly charge costs that are normally indirect, and do not include costs that are unallowable to charge to sponsored programs.

If the granting agency provides a budget form, you must use it based on the numbers dervied from the UAF budget template. Please check the application guidelines for the most current forms.

The PI needs to provide rationale for various items in the budget. It is crucial to prepare a budget narrative which outlines the basis on which each cost was developed. Desribe the project activity which substantiates the particular expense and include any information requested in the application guidelines.

Budget justifications must be included regardless of agency/sponsor requirements. If for some reason a justification wasn't written in the past for a multi-year project, OGCA will require one when the newest phase comes to us for review.

There are many reasons why a justification of expenses is necessary. A consistent approach is being applied to all sponsored projects at UAF to assure compliance on many levels. If and when UAF is audited, the federal government makes it the university's responsibility to fully justify all budgets. In addition, a justification is a small bit of information that goes a long way in protecting the budget. It demonstrates thorough budget preparation and project planning. Items that are justified are less likely to be cut out of the budget by the sponsor. It is one of OGCA's main functions to review these budgets and to be able to match the items requested in the budget lines to the project description to ensure forethought, necessity, consistency, and compliance of all items listed. Budget justifications serve as a compliance safeguard.

Finally, budget justification sections make post-award determination on allowable and allocable costs quick and simple. The post-award technician doesn’t have to research the entire proposal, whether attached or included by reference in the award document, to verify costs.