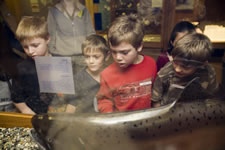 UAF photo by Todd Paris
Students look at the museum’s salmon display before visiting a simulated fish camp during a program on the Athabascans. 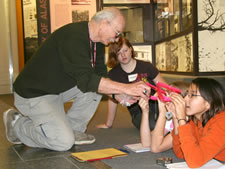 Photo by Kerynn Fisher
Jack Grandfield helps students with a triangulation exercise during a program on the aurora. Early aurora researchers used triangulation to measure the height of the aurora. 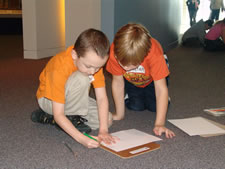 Photo by Terry Dickey
Students create their own artworks during a docent-led tour in the museum’s new art gallery. 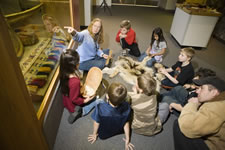 UAF photo by Todd Paris
Students gather around volunteer docent Mindy Gallagher as she points out Athabascan clothing and tools in one of the museum’s display cases. 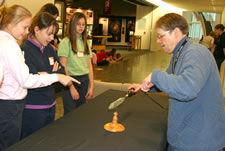 Photo by Kerynn Fisher
Maggie Billington uses a vacuum tube and Tesla coil to illustrate the interaction of electricity and magnets during an aurora program for sixth graders.

By Kerynn Fisher, University of Alaska Museum of the North
December 2006 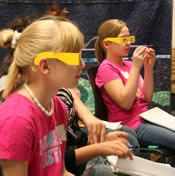 Photo by Kerynn Fisher
Sixth-grade students wear prism glasses to view the different colors of light spectrums during a program on the aurora.

What do a retired customs officer, UAF students and a theater buff have in common? Along with more than a dozen other volunteers, they’re a key part of the University of Alaska Museum of the North’s school tour program.

For a quarter century, the museum’s school tours have been a valuable resource for teachers and part of growing up in Fairbanks. From "Alaska’s Animals" for kindergarteners to "Understanding the Aurora" for fifth and sixth graders, all of the programs are designed to complement in-class lessons and have been developed with specific curriculum needs in mind.

Since the program’s inception, more than 350 volunteers have given their time to the museum’s school tours.

The docent-led school tours started in 1981 with three docents teaching an Alaska animals program. While the museum has full-time staff to manage its educational programs, the docent-led tours depend almost entirely on volunteers.

"We attracted a few additional volunteers after that first year, primarily by asking friends of friends, who would ask their friends," said Terry Dickey, the museum’s education coordinator. "As the docent group grew, I attended many after-school meetings to urge teachers to sign up for tours that supplemented their classroom lesson plans."

Slowly, the reputation of the museum’s programs grew with teachers throughout the school district, and the professional training for docents attracted volunteers from as far away as Eielson Air Force Base and as close as UAF faculty and students. Since the program’s inception, more than 350 volunteers have given their time to the museum’s school tours, including 21 who volunteered during the fall 2006 semester. On average, docents donate 600 hours to the museum each semester. The group now attracts about 25 volunteers per semester who work in teams of four to five docents per class. This small student-docent ratio personalizes the museum experience and invites sharing of experiences between the older docents and younger students.

Some docents come to the museum after careers in education, and others have gone on to become teachers after their experience at the museum. But the vast majority of the volunteers have no prior teaching experience.

"You just need a desire to learn more about Alaska and to share your knowledge with the kids."

"Unlike many other museums, which rely on people with teaching backgrounds, the program here is open to everyone," said retired customs officer Al Knapp. "You just need a desire to learn more about Alaska and to share your knowledge with the kids." Knapp started volunteering in 1997 after he retired and has been active with the docent program ever since. 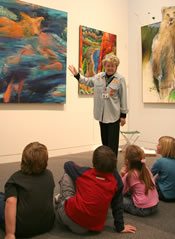 The opportunity to work with chldren brings many of the volunteers to the program, including other retirees like longtime Fairbanksan Maggie Billington, a veteran theater performer.

"Being a docent is really fun. It feeds the theater ego--being able to engage the kids and hold on to their attention," Billington said. Now a three-season veteran of the program, Billington says she still gets "first night jitters" the first time she does a program. Like many of the other docents, she spends time online researching the subject matter before leading new programs. She says you never know what questions the kids are going to ask, and you want to be prepared.

Each semester the museum conducts a free two-week training program for the volunteer docents, covering the fundamentals for each of the school tour programs the museum will offer that semester. The museum offers five or six programs each semester, with options for each grade level from kindergarten through sixth grade. Each tour has three or four stations spread throughout the museum’s exhibit galleries and the new education center, with each station led by one or two volunteers. With so many programs and so many stations, Billington said she never has a chance to get bored.

The museum is constantly evaluating and adapting the school tour programs to take advantage of the resources available. In recent years, with advances in affordable technology, the museum integrated digital animations of the aurora and other multimedia resources into the activities for the school tours to complement the exhibits and hands-on activities. This year, with the opening of the Rose Berry Alaska Art Gallery and The Place Where You Go to Listen in the museum’s new wing, the museum added a new program on Alaska’s art for its K-6 school tours.

Teachers and local schoolchildren enjoy free admission for their docent-led tours as part of the museum’s partnership with Flint Hills Resources.

"I can’t say enough about how wonderful the tour was for my students," said Rob Childers, a teacher at Two Rivers Elementary School. "The docents are top-notch, and we are so lucky to have them. In fact, Fairbanks is fortunate to have such a professionally run museum."

Teachers and local schoolchildren enjoy free admission for their docent-led tours as part of the museum’s partnership with Flint Hills Resources. The four-year, $150,000 agreement continues through the 2008-09 school year.

Each year, hundreds of students send thank you letters, like this one, after visiting the museum on a docent-led tour.

For many elementary students, a museum visit with a docent is their first museum experience. This becomes important because as the students grow up and become adults, they bring their own children to the museum.

"Now we’re getting kids in the school tours whose parents went through the educational programs in the 80s," Dickey said. As the adults remember the nurturing and learning they had as a young student, they are more likely to become museum members or docents themselves and continue the tradition of providing learning opportunities to yet another generation of students.

"I can’t imagine a more fulfilling career than to celebrate 25 years of museum docents providing learning opportunities for the children of Fairbanks," said Dickey. "This represents teaching one entire generation of our youth."

Interested in becoming a museum docent? The museum is looking for volunteers for the spring 2007 semester. No experience is necessary. Free volunteer training runs Tuesday, Jan. 16-Friday, Jan. 26. For more information, contact Jennifer Arseneau at 474-6948 or j.arseneau@uaf.edu.