Increased Maritime Traffic in the Arctic:  Implications for International Cooperation and Security 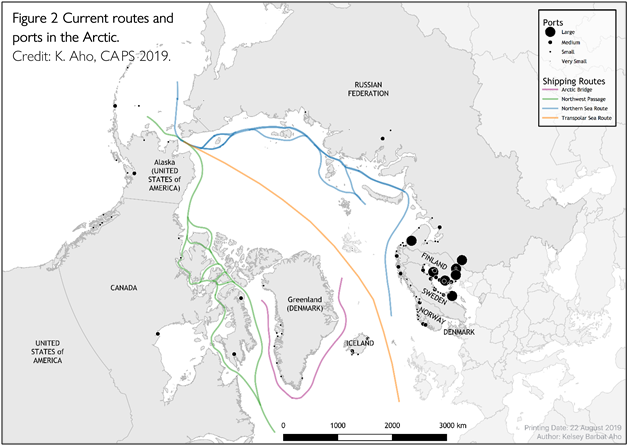 With increased traffic and corresponding economic, political, and security concerns, Arctic states will need to better define their policies related to sea routes. Will states continue to follow the well-established ethos grounded in peace and cooperation as they address issues related to maritime traffic? Or will they break from this norm and secure their interests through unilateral action and nationally strategic and economically prosperous methods? This paper argues that the management of maritime traffic in the Northwest Passage and Northern Sea Route will develop as two distinct options for trans-Arctic shipping.
Download PDF

This project examines the social-environmental context of marine transit and port development through three multi-author research papers produced initially as white papers for decision-makers and their staff. We focus particularly on the establishment of a port in Alaska - for the purposes of this study, we have chosen Nome, as it is one of the locations under consideration for a future port - and the development of further marine traffic across the Arctic Ocean, over the north of the state, and through the Bering Straits. The papers will address the national and international context, the state to community levels, and lastly, will combine findings across scales of action to project future plausible scenarios of development conditions over several decades. The changes to annual weather patterns and disruptions in climate processes experienced in the Arctic along with an international press for access to the Arctic Ocean make this a timely project. We plan to provide a comprehensive overview to decision-makers by addressing the question “What are the implications for Alaska, the U.S., and the North American region of a deep draft port as a part of a new system of international Arctic marine traffic?”

Sea ice coverage of the Arctic Ocean continues to diminish, opening this region to increased marine shipping, tourism, research, and military operations. In 2018, Senator Murkowski (R-AK) proposed two bills to further develop the United States as an Arctic nation. The proposed Shipping and Environmental Arctic Leadership Act (SEAL Act) would create a U.S. Arctic Seaway Infrastructure Development Corporation, which would foster increased marine traffic by developing one or more new ports in the Circumpolar North. Currently, Arctic shipping routes are marked by insufficient and contentious structures with competing national policies. The Center for Arctic Policy Studies (CAPS) at the University of Alaska Fairbanks has initiated a project centered on Arctic marine shipping and port infrastructure development to evaluate the potential effects across scales of governance, from villages in the state of Alaska to the Pan-Arctic. The responsible growth of the Alaska and regional economies is of paramount importance across stakeholder groups. Private businesses, Indigenous peoples and other Arctic residents, and policy-makers must be well informed not only within their own specific sectors but across multiple areas of concern, because infrastructure development in the North and on the coasts will have significant and cumulative effects that cannot be disconnected from one another. There will be trade-offs between subsistence security, regional stability, and environmental impacts and the infrastructure, access, and economies brought by significant development.