The Center for Arctic Policy Studies (CAPS), administered for the University of Alaska by the  International Arctic Research Center, makes accessible to policy-makers the knowledge and expertise of University of Alaska scholars concerning rapid environmental, economic, and societal change in the Arctic.

We serve the general public, Alaska legislators and executives, the U.S. federal government, the Arctic Council and its Working Groups, scholars, journalists, and industries seeking to understand Alaskan and Arctic issues.

In particular, CAPS serves the State of Alaska by:

CAPS offers forward-thinking scholarship in a time when we need better integration between policy and research to address the challenges facing Alaskans, Indigenous peoples throughout the Circumpolar North, Arctic governments, and beyond.

CAPS recognizes the historical dimensions of policy contexts and offers new, integrative approaches towards problem-solving rooted in evidence-based practices, cooperation, and a positive outlook toward the future of Alaska and the Arctic.

Learn more below about the Arctic, policy studies, and how they intersect:

What is the Arctic?

Not everyone means the same thing when they refer to the Arctic. The map below demonstrates that the boundaries of the Arctic region can look quite different, depending on the definition used. Perhaps most commonly, the Arctic refers to the region of Earth located above the Arctic Circle (66° 33' 44” North). The Arctic Circle marks the latitude above which the sun does not set on the summer solstice, and does not rise on the winter solstice. Others define the Arctic region based on physical characteristics such as average temperature, biodiversity, or the presence of certain types of vegetation, while still other definitions draw boundaries based on human activity, such as emergency preparedness and environmental management. 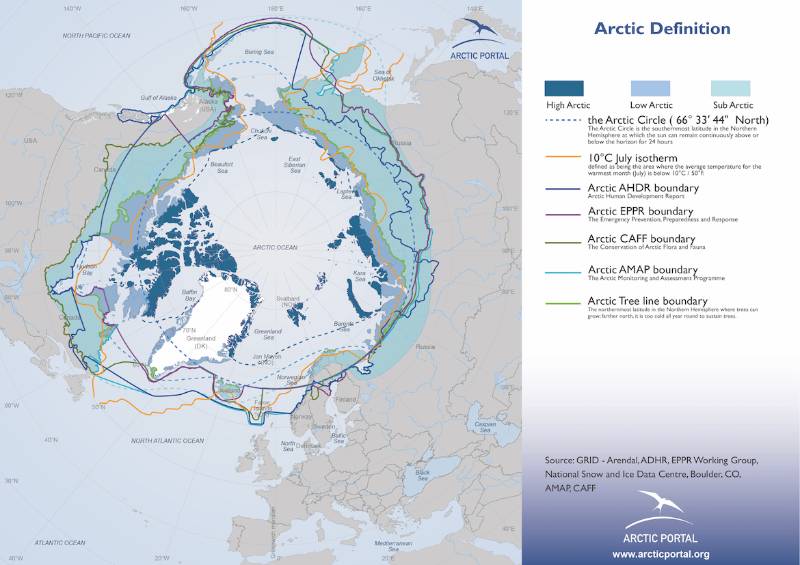 Map provided by www.arcticportal.org
Why do policy studies matter?
Policy studies are inherently bound up in asking, “What’s the problem?” When we examine institutions, rules, policy-making, and debates about public policies and governmental decisions from a rational-choice perspective, we assume a linear, lucid, empirically researched process of making decisions.
But this is a partial reality. By including human passions, moral convictions, and the motivations for political action when we examine policy processes, we can often understand much more. “In the real world, we are often forced to entertain paradox, but we are able to live with it because paradoxes are paradoxical only from within one worldview. Politics is one way we help each other see from different perspectives. If we can get outside one viewpoint, we can do a better job of living together and solving common problems” (Stone 2012, p10).

Put another way, policy studies reveal to us how two seemingly opposed perspectives can both be understood as true when one broadens the scope of analysis.

A poignant example in many Arctic nations is the boom-bust cycle in extractive resource production and distribution.

Consider that on an individual level, most people prefer low prices for oil and gas, because it benefits their ability to run machinery and lowers transportation and heating costs. Simultaneously, the same people can benefit in their local and national economies from high prices on the barrel because it creates revenue streams. Clearly a viewpoint would be “high costs of oil are bad” but equally true, when one expands his or her thinking, is that “low costs of oil are bad.”

The Center for Arctic Policy Studies is motivated by understanding the existence of these types of policy paradoxes.

Understanding these paradoxes can provide greater insight about how Arctic stewardship might make progress to lessen the tensions of diverse stakeholders challenges across states, nations and cultures, even if one can never resolve them. The CAPS approach is that by fostering this attitude, we can generate an adaptive leadership culture that enables governance at all scales to be more nimble in the face of changing social-environmental conditions.

The premier high-level forum for intergovernmental cooperation on Arctic issues is the Arctic Council, founded in 1996 as part of the Ottawa Declaration. 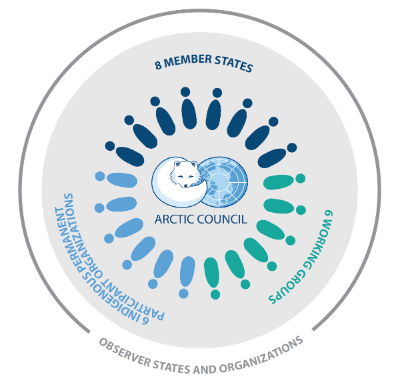 While the Arctic Council promotes cooperation and coordination among Arctic States, indigenous communities, and other inhabitants, the Council itself does not implement or enforce Arctic policy. Each of the eight Arctic member States are responsible for individually creating and implementing policy based on the guidelines, assessments and recommendations of the Arctic Council, which are made with input from the six Permanent Participant organizations (representing Arctic indigenous peoples) and non-Arctic States and organizations that have been granted observer status.

Most formal national policies towards the Arctic are vague enough in their language to permit multiple interpretations. In other words, much of what is “Arctic Policy” – the actual governance by governments in Arctic and sub-Arctic locations - is determined by national legislatures, state/territorial/provincial governments, co-management regimes with Indigenous peoples, local-scale legislatures, and even the activities of major city councils (e.g., zoning, education, taxation). Sometimes these actors are at a considerable distance from the Arctic, and the Arctic is not a central consideration in their decision-making processes. This means that the day-to-day politics in any one country may alter the interpretation of what that nation’s Arctic policy means in implementation, and that this may occur in unintended and unforeseen ways.