UA Museum of the North 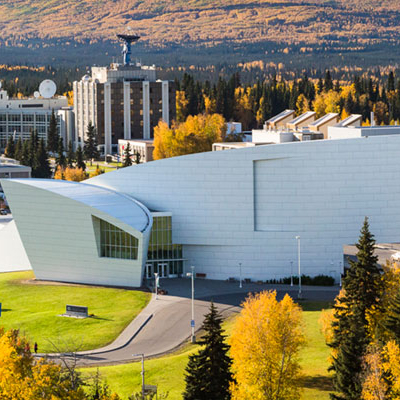 Charles Bunnell, the college’s first president, envisioned Alaska’s university as a center of research about Alaska. No part of the institution fulfilled that goal better than the University of Alaska Museum of the North. According to tradition, the museum began in 1922 as a single display case in Bunnell’s office.

In a partnership unprecedented for state buildings in Alaska, the modern museum’s expansion was funded primarily by nonstate funds. More than 600 foundations, corporations and individual donors made up the private base of support. Combined with funding from the state of Alaska and federal grants, more than $42 million was raised for construction, equipment and furnishings. Construction began in June 2002 and was completed in summer 2006. The expansion includes a 28,000-square-foot research center, the 10,000-square-foot Rose Berry Alaska Art Gallery, a 3,000-square-foot learning center, a multimedia auditorium for presentation of lectures, films and performances, and an expanded museum store.

In addition to a permanent exhibit depicting the biology, culture and history of each region of Alaska, the museum includes temporary exhibit space, multimedia presentations and a gift shop. The museum sponsors programs such as the Alaska Native Heritage Film Center, the Alaska Quaternary Center, archaeological and anthropological research, world-class mammalogy, ornithology and aquatic collections and research, and ethnographic research. Its collections include more than 2,600 drawings, paintings, photographs, prints and sculptures focusing on the North. Collection highlights include Blue Babe, a 36,000-year-old mummified steppe bison; a herbarium; the state’s largest display of gold; and the world’s most comprehensive collection of Alaska Native basketry, clothing and footwear.