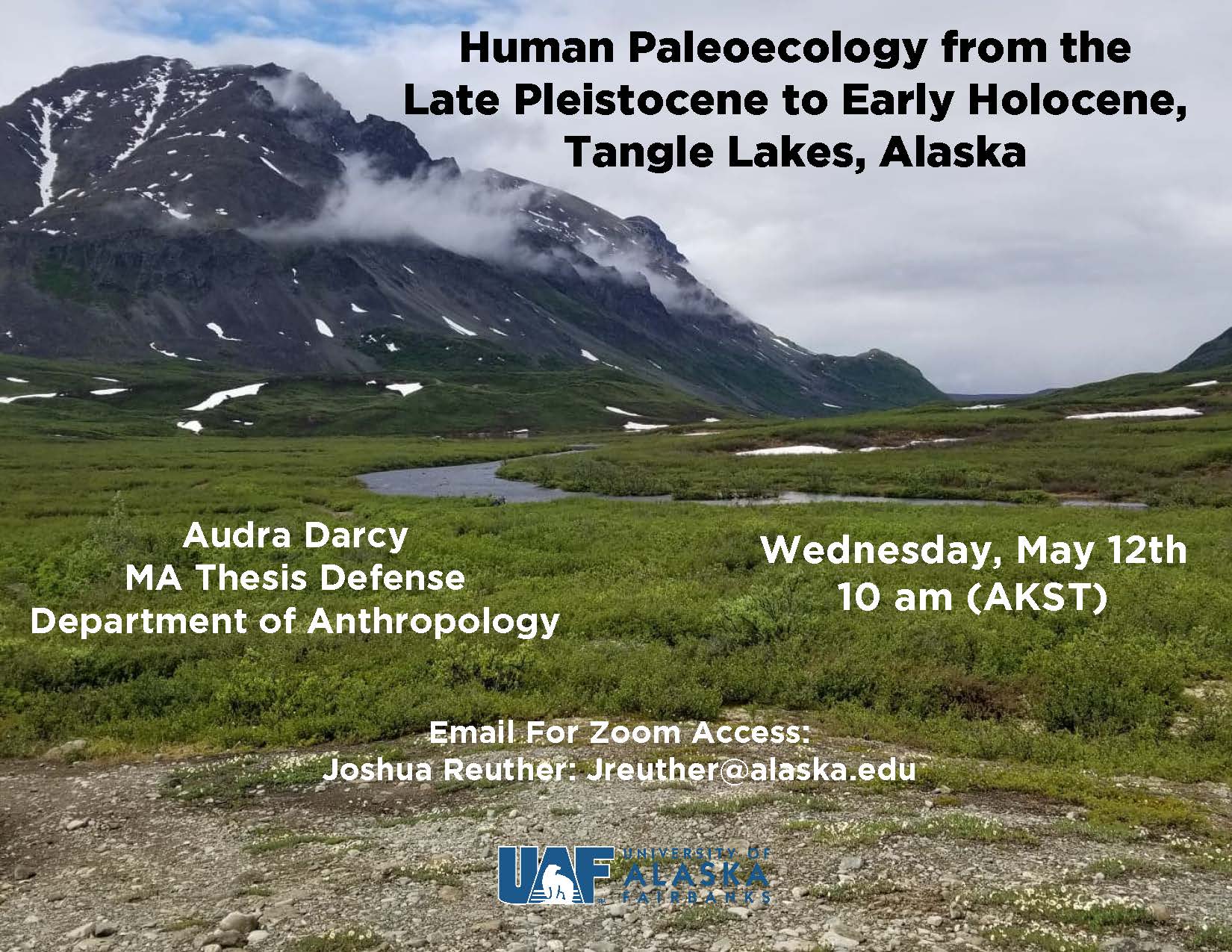 Human Paleoecology from the Late Pleistocene to Early Holocene, Tangle Lakes, Alaska
This study examines paleoenvironmental change from the Late Pleistocene to Early Holocene in the Tangle Lakes region of interior Alaska to explore changes in resource distribution and impacts on prehistoric hunter-gatherer subsistence patterns in upland settings (>500 masl). In interior Alaska, prehistoric hunter-gatherer subsistence economies were organized around the procurement of large herbivores (bison, caribou, elk, and moose), which were primarily regulated by habitat availability. Changes in habitat availability altered the distribution of key faunal resources, necessitating shifts in land-use strategies. The palaeoecological chronology from Glacier Gap helps contextualize resource distribution within dynamic landscapes by identifying changes in habitat availability for grazing, mixed-feeding (bison, caribou, elk), and browsing (moose) herbivores. This study applies pollen analysis, as well as carbon and nitrogen isotope analysis, of lake and peat deposits to reconstruct paleoenvironmental change from~14,000 to ~6,000 Cal yr BP. Results indicate grazing habitats persisted until approximately ~13,500 Cal yr BP which allowed for initial expansions of bison and elk, but habitats became mixed following the appearance of birch shrubs. Existing archaeological data indicate that initial use of upland regions coincided with expansion of bison and elk habitat, which would have represented large-bodied, predictable sources of food. As shrubs continued to expand, grazing and browsing habitats became increasingly fragmented in a mix-feeding period between ~13,000 to ~10,000 Cal yr BP. Fragmentation of bison and elk habitats made these species less predictable on the landscape, which likely led to the abandonment of the Tangle Lakes. A shift from mixed-feeding to browsing habitats occurred with increasing shrub growth and the expansion of peat following the Holocene Thermal Maximum approximately ~10,000 Cal yr BP, supporting caribou and moose populations. Settlement patterns indicate re-occupation of the Tangle Lakes, and intensified use of uplands, possibly on an annual basis, when browsing specialists became more predictable, and settlement patterns shifted to the procurement of caribou ~6,000 Cal yr BP. Taken together, grazing and browsing habitats represent homogenous environments where resources were more abundant and predictable for hunter-gatherers, while mixed-feeding habitats represent heterogenous environments where herbivores were fragmented and less abundant or predictable on the landscape 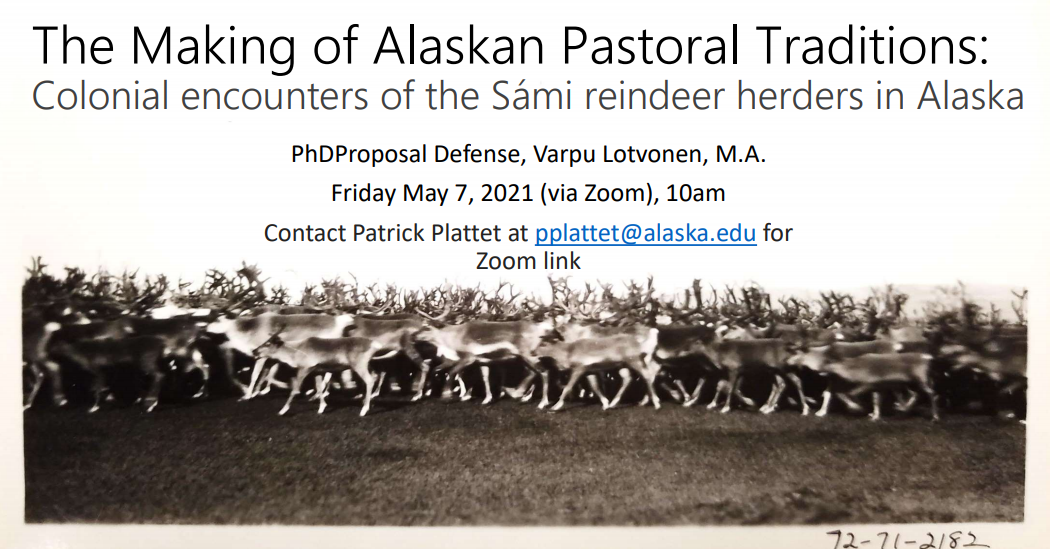 The making of Alaskan pastoral traditions: Colonial encounters of the Sámi reindeer herders in Alaska
Friday, May 7, 2021 at 10am AKDT. via Zoom
Abstract: In the late 1800s, two groups of Sámi people came to Alaska to teach reindeer herding to Alaska Native peoples. Thus, they became entangled with colonization and cultural assimilation schemes of the U.S. government. The immigrants’ contribution to the development of reindeer herding, as well as their experiences as Indigenous and colonized people, has not been fully addressed in the literature regarding reindeer herding in Alaska. The proposed research sheds light on the little-known stories of Sámi reindeer herders in Alaska by examining archival and bureaucratic materials and through photographic elicitation fieldwork in Alaska and northern Fennoscandia. A main objective is to build a nuanced understanding of the colonial encounters between the Alaska Sámi and the Native and non-Indigenous peoples who were involved in the Alaska Reindeer Project (ARP). In contrast to earlier essentializing narratives about the Alaska Sámi, this research focuses on their lived experiences within a nexus of colonial encounters. Methodologically, it applies the New Rhetoric textual analysis framework onto written materials to elucidate the cultures of colonialism. An important aspect of the research is its collaborative dimension: Preliminary findings as well as archival photographs will be discussed with Sámi local knowledge experts in Guovdageaidnu (Kautokeino), Norway, during fieldwork. Along similar lines, another objective is to share the archival materials that are examined in the context of this research with contemporary Sámi communities. 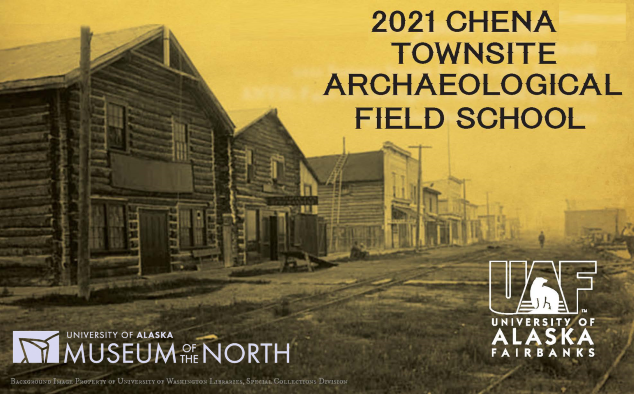 Founded in 1902 on the north bank of the Tanana River, Chena was a bustling goldrush town home to thousands of miners and settlers that flocked to the region in search of prosperity. Chena rivaled its close neighbor Fairbanks as the commercial center of mining operations in the Alaska Interior. The rivalry lasted only a few short decades however before Fairbanks emerged victorious. Chena became a ghost town by 1920 and was all but forgotten. Little remains of the once thriving town. In the past two decades however, archaeologists have mapped, surveyed, and begun to excavate parts of Chena in hopes of better understanding its birth and abandonment. This year we will continue this research by conducting archaeological survey and excavations at the site where Chena once stood.

The Chena Townsite is located just outside of Fairbanks, Alaska. Students will live in their own accommodations and report to the site daily. Students will provide their own lunches, but all tools and equipment will be provided. Participants will learn the fundamental skills of archaeological fieldwork while excavating and documenting historic structures and artifacts. They will examine artifacts, botanicals, sediments, and faunal materials to learn analytical techniques while providing insight into the lives of the traders, miners, and other members of this short-lived historic community.

The UA Museum's Geist Fund competition is now open. For student projects in archaeology, anthropology and paleontology that relate to collections at the Museums. Proposals are due April 5th and the award limit is $2500. Geist flyer and info sheets are attached. For more information on the Geist Fund, visit https://www.uaf.edu/museum/collections/archaeo/geistfund/