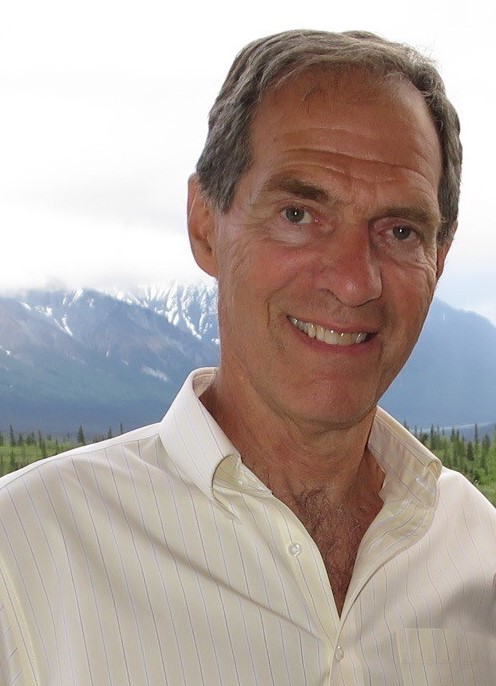 An Evening with STEVE FRANK
Monday, June 6, 2022 at 7pm
Murie Auditorium
Lecture will be livestreamed.  Reception to follow.

Steve Frank has always been a quiet, thoughtful, and effective leader. As a UAF student, Steve Frank was awarded the Outstanding Student of the Year in Business Administration.  After graduation, Steve began his career as a banker, went into real estate, then pivoted to politics. He served as a legislative aide in Juneau, then was elected to the Alaska State House in 1984. He moved to the Senate 1989-96 where he co-chaired the Finance Committee and was known for his ability to work across the aisle for the people he served. In 2003 he was appointed by Gov. Frank Murkowski to the Board of the Alaska Permanent Fund. He has served on the Fairbanks Convention and Visitor Bureau Board of Directors, and today he continues to serve on the Fairbanks Community Hospital Foundation. From 1989 through 2016 he successfully developed, owned and managed the Rivers Edge RV Park hotel and restaurant with his wife, Linda Anderson.  Steve has been a significant contributor to our community and is widely recognized for his ability to bring consensus among disparate elements for the welfare of all. 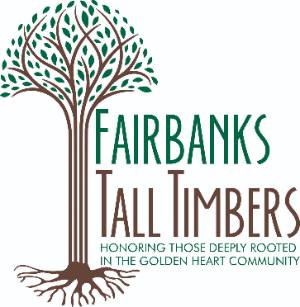 Mondays at 7PM. These events will take place at the BP Design Theater, located in ELIF 401 in the ELIF building on UAF Campus, located at 1764 Tanana Loop.

All presentations will be recorded and posted to the web following the live presentation.

The Fairbanks Tall Timber Series was created to honor those who have served the Fairbanks community well.  Join veteran newsman Robert Hannon either in person or via Zoom as he interviews these stalwart members of our community.

6/13
Anna Frank
Anna was born and raised in Old Minto alongside five siblings. At age 15 she left her village for Fairbanks with Richard Frank, and enjoyed a happy marriage until his death 57 years later. After raising their four children, she worked at creating the first health education department for Tanana Chiefs Conference in 1975. Recognizing her listening skills and gentle, common-sense approach with people, TCC trained her in counseling, and so began a lifetime journey. She grew up in the Episcopal church and became ordained as a Deacon. Years later she was asked to consider being ordained as priest. Her extensive counseling training has served her well as the first female Alaskan Native Episcopal priest. In 2019, Rev. Anna Frank received an honorary Doctor of Laws degree from UAF.

6/20
Jim Sampson
Jim was born in the Panama Canal Zone and moved to Alaska a year later.  He is the eldest of eight children. He earned an Associate Degree in Police Administration from UA Fairbanks and began his working life with the Laborers Local 942. Jim was later named Alaska Commissioner of Labor by Gov. Steve Cowper. Grace Schaible convinced him to run for Borough Mayor and agreed to be his campaign chair twice, successfully. Gov. Tony Knowles appointed him to the Alaska Permanent Fund Board. In 2003 he took over presidency of the AFL-CIO for 5 years, representing 50,000 union members statewide. After a short retirement, he began raising money for the Fairbanks Pipeline Training Center and served as director until 2016.

6/27
Mary Shields
As a college student at the University of Wisconsin, Mary came to Alaska to work with the Campfire Girls organization and fell in love with the state. After her college years, she returned to live in a wilderness cabin. Caring for sled dogs was part of her remote lifestyle, and she made history when she signed up for the race’s second year, 1974. She became the first woman to finish the grueling race. Ten years later she ran the inaugural Yukon Quest race between Fairbanks and Whitehorse, not once but three times, and she finished all three races. Shortly after the breakup of the USSR, she participated in the Hope Race to Russia. As an author, speaker, and role model for women, Mary’s greatest joy has been sharing her love of Alaska and her dogs, her adventures and her Goldstream Valley home with countless visitors.

7/11
Bishop McCormick
Born in North Carolina, Bishop McCormick came to Alaska in 1957 with the military and decided to stay. Over the years he has come to be highly regarded throughout the state of Alaska and the local communities of Fairbanks and North Pole. He is recognized as a leader with strong community service ties for his contribution to a multitude of local organizations. Bishop serves with distinction as founder of the Interdenominational Ministerial Alliance of Fairbanks (IMAF), as a past president of the J.P. Jones Community Development Center, as a member of the board of directors of the Fairbanks Rescue Mission, as President of Fairbanks Kiwanis, and as one of the founding board members of Love in the Name of Christ (Love, Inc.).

7/18
Matt Atkinson
Matt, a Fairbanks native, was always an ardent hockey enthusiast. He played for two USHL teams, the Rochester Mustangs and the Dubuque Fighting Saints. In 1986, Matt and two Fairbanks college friends developed a business plan for their summer employment – small group tours to the Arctic Circle. Northern Alaska Tour Company was born and expanded to northern camps for polar bear viewing and even more outhouses and gravel roads. This summer-only business expanded to year-round when winter trips were added with aurora viewing. They partnered with Sukakpak Inc. to include remote camps in Coldfoot, Deadhorse, and along the Yukon River. In 2012 the business expanded with the purchase of Warbelow Airline for Denali flightseeing tours and more. Today, 35 years later, the award-winning business is thriving as it expands and continues to make significant contributions to the Fairbanks economy.

7/25
Shirley Gordon
In early 1943, Shirley Lewis boarded a steamer headed for Seward, Alaska to begin a secretarial job with the Army Corp of Engineers. Onboard she met Bill Gordon with his newly acquired Bachelor of Divinity degree to serve the Episcopal Church in Seward. By July they were married and off to Pt. Hope (where she deplaned in high heels) to minister to kindly people who in turn helped the couple survive and thrive. Shirley Gordon spent the next 25 years in Fairbanks as wife of the young “Flying Bishop” of all Alaska who was seldom home for long. She was a fine hostess, serving the church with an open-door policy for overnight guests and mealtimes, while raising their four children. Following the death of her husband, Shirley returned to Fairbanks where she continues to be a community treasure.

8/1
June Rogers
Born and raised in Fairbanks, June was an owner of a mechanical contracting company for 15 years. Her passion, however, has always been in the arts which benefited from her business experience. She coordinated Fairbanks operations for Alaska Repertory Theatre. At the same time, she worked for Fairbanks Arts Association as a volunteer and Board member starting in 1981, then as Director for twenty years from 1996-2016. During the early years she appeared in light opera productions singing, dancing and costuming. She and her husband Bill Rogers renewed the Sandcastle Band in the early 80’s and have contributed their talents to events in Fairbanks and beyond for 40 years. June currently serves on the Fairbanks City Council.

8/8
Mary Nordale
Mary Nordate comes from a family with long ties to Fairbanks history. Her grandfather, Anton Nordale, built the Nordale Hotel. Her father Alton served in the Alaska Legislature, and her mother Katherine was deputy clerk of the court in Fairbanks. Additionally Mary’s life of service and independence was influenced by the family friend Senator Bob Bartlett. After graduating from college Mary went to Washington D.C. as one of the secretaries in the office of the Senator. She realized she wanted to continue her education and went to George Washington University law school at night, when women were a minority in the classroom. After graduation she returned to Fairbanks as assistant US attorney. As politics changed, she worked as State District Attorney for the Small Business Administration after the 1967 flood in Fairbanks, and as Alaska‘s Commissioner of Revenue and in private practice specializing in Business and Mining Law.

The Fairbanks Tall Timber Lecture Series  is made possible by a generous contribution from Explore Fairbanks. 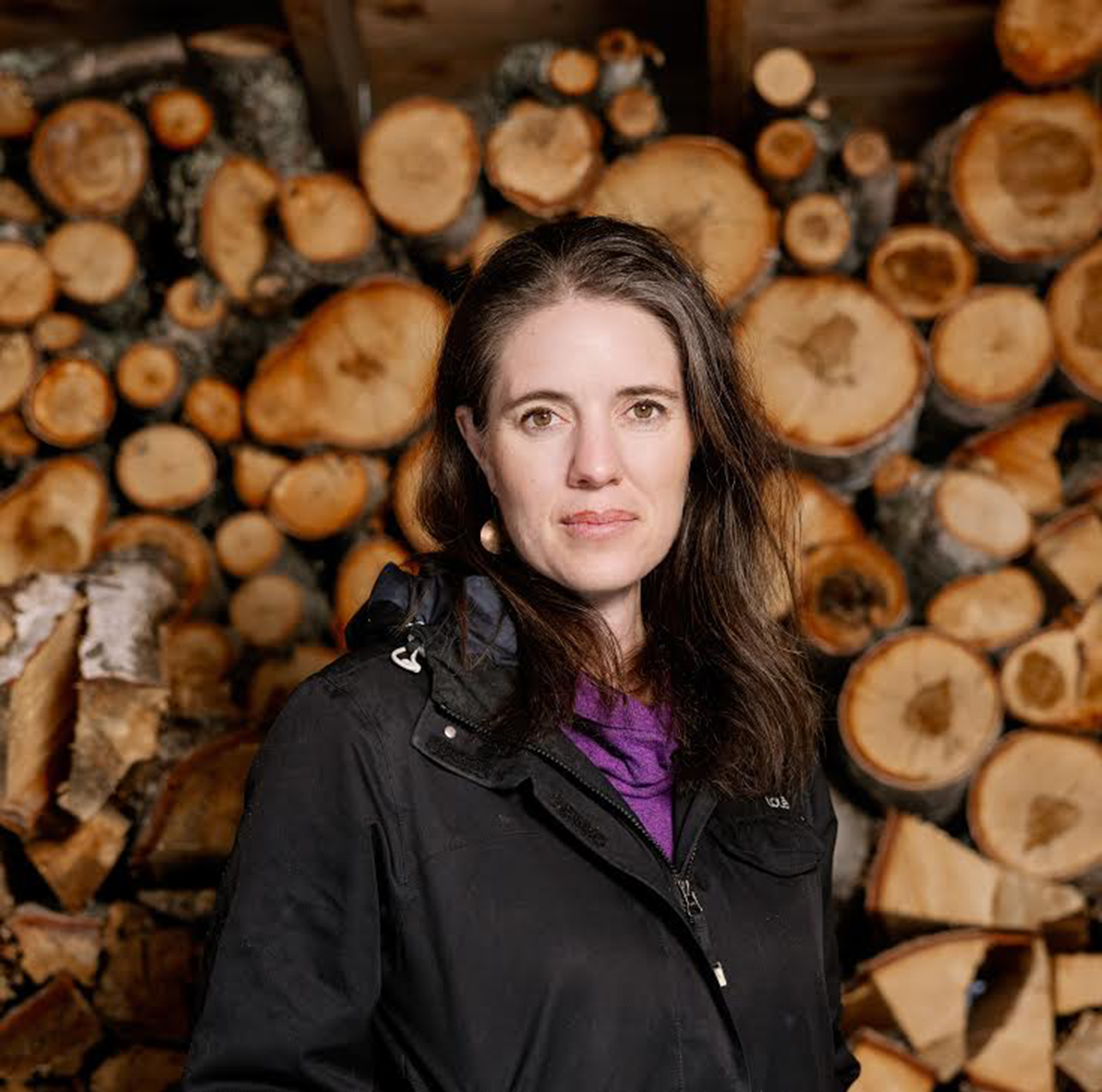 Tuesdays at 7PM. These events will take place at the BP Design Theater, located in ELIF 401 in the ELIF building on UAF Campus, located at 1764 Tanana Loop.

All lectures will be recorded and posted to the web following the live presentation.

7/12
The Evolution of Diagnostic Imaging in Fairbanks and What's Around the Corner
Dr Kier Fowler, MD and Dr Jordan Ross, MD, Diagnostic Radiologists

7/19
Responding to a Pandemic: What They Never Taught in Medical School
Dr Kathleen Carey, DO, Family Medicine

Healthy Living Lectures are made possible by the generous contribution from Foundation Health Partners. 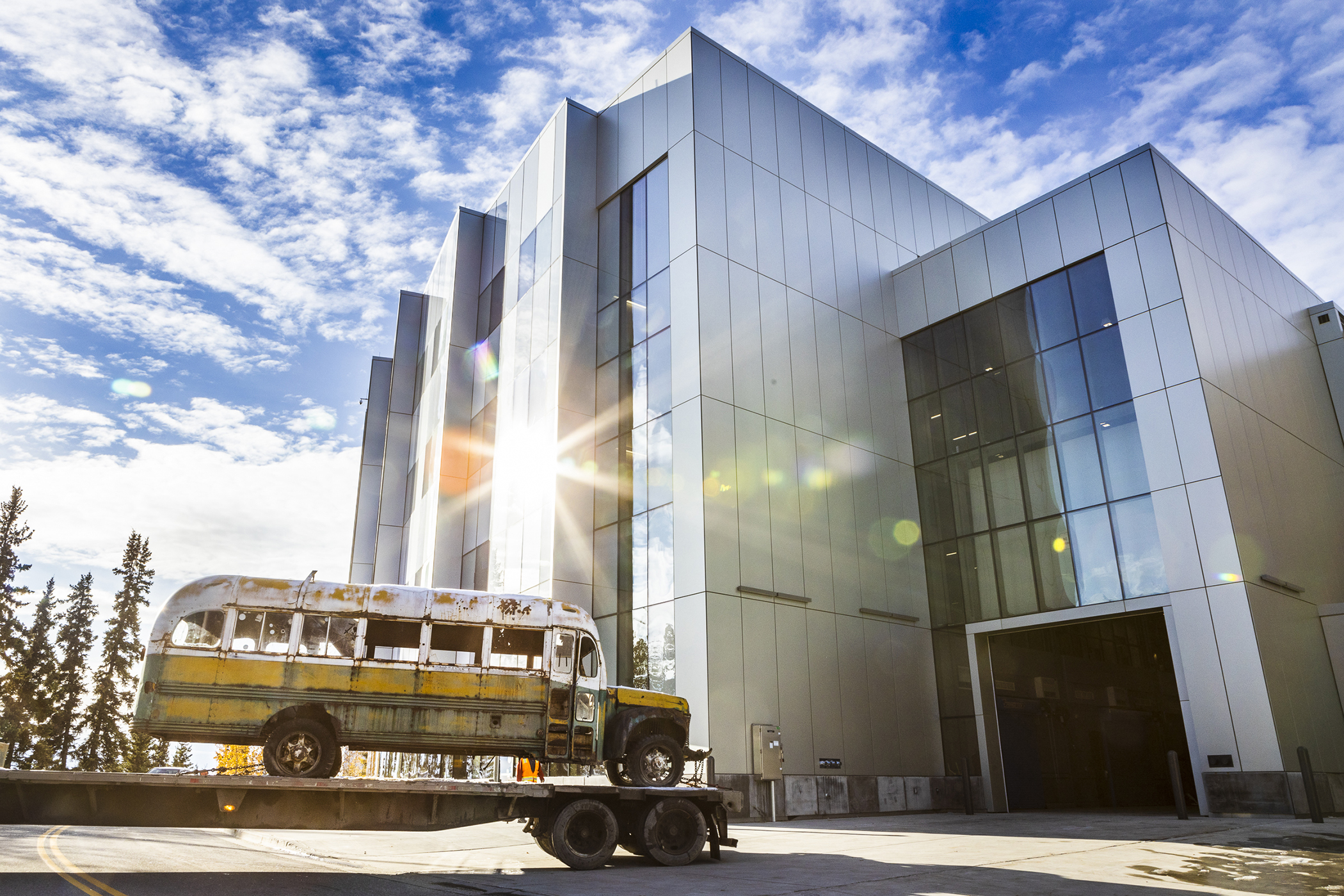 Wednesdays at 7PM. These events will take place at the BP Design Theater, located in ELIF 401 in the ELIF building on UAF Campus, located at 1764 Tanana Loop.

All lectures will be recorded and posted to the web following the live presentation.

6/22
Tsunamis in Alaska: Are We Ready for the Next Big One?
Elena Suleimani, Research Analyst and Tsunami Modeler, Alaska Earthquake Center

6/29
Sunny with a Chance of Electron Precipitation: Space Weather and What it Means to You
Don Hampton, Research Associate Professor, Atmospheric and Space Science

7/13
Flying to the Future: Drones in Alaska
Cathy Cahill, Director for the Alaska Center for Unmanned Aircraft Systems Integration (ACUASI)

8/10
From Nanook to Atanarjuat: The Evolution of Recording Culture in the North
Lenny Kamerling, Professor and Curator of Film Emeritus at the UA Museum of the North

Thursdays - Music in the Garden 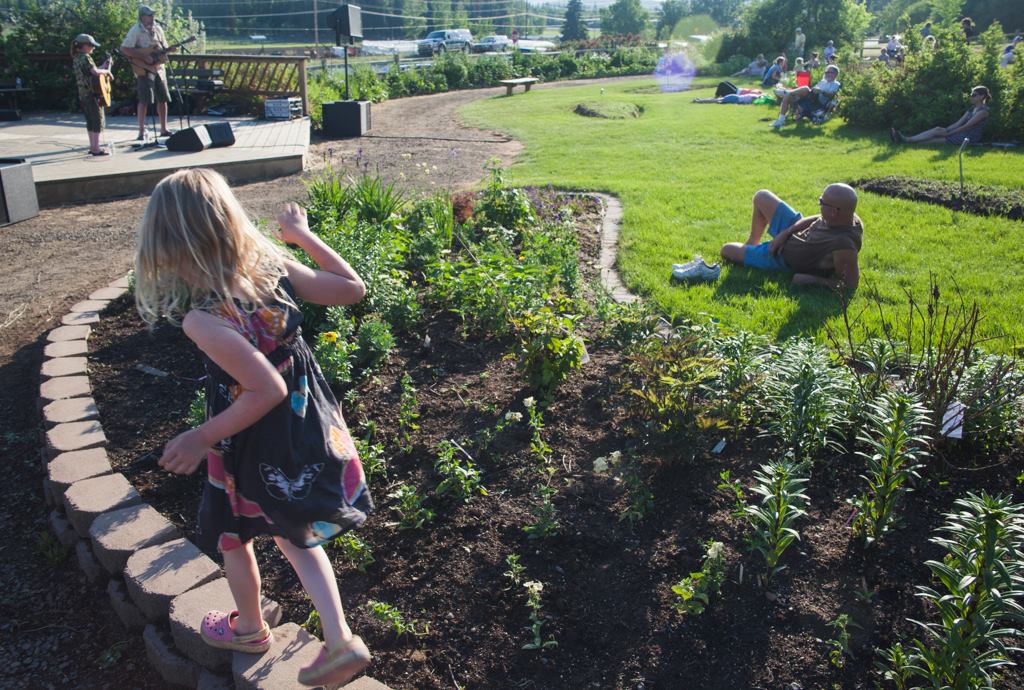 Thursdays at 7 pm in the UAF Georgeson Botanical Garden

For more information, or to make an accommodation request at least five days in advance of this event, please contact the UA HR Accessibility Team at ua-ada-accessibility@alaska. edu or by phone at (907) 450-8200.

Music in the Garden Concerts are made possible by the generous contributions of these sponsors:  SRS, 529 Alaska, Design Alaska, College Rotary, Toy Quest, and the Georgeson Botanical Garden.