Terrence Cole was a force to be reckoned with, a brilliant historian with an amazing sense of humor. We were privileged to have him a part of the summer faculty for many years.
In 2018, facing a terminal illness, we invited him to give a final lecture after retiring from teaching, which he did to a super overflow audience. What a magical evening it was as we were immersed in Terrence's world. In 2019, we had the pleasure of hosting Terrance and Dermot for a talk.
We invite you to relive those evenings with Terence and remember him the way we are sure he would want to be remembered.

To relive our great past events, use the drop-boxes below to explore all Summer Sessions events. 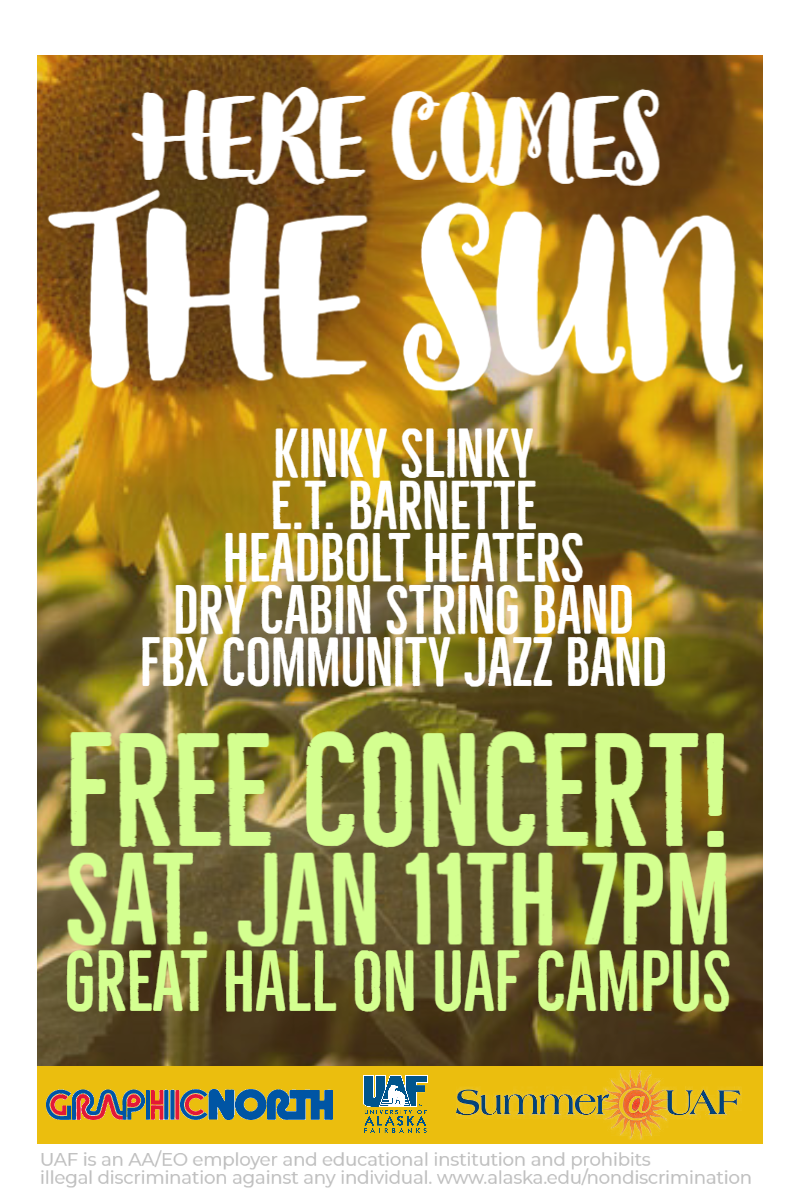 This concert was sponsored by Graphic North printing.

July 8 - An evening with Dermot and Terrence Cole

It's a safe bet that twin brothers Terrance and Dermot Cole together have written more articles and books on Fairbanks and Alaska than any living authors. Together for this year's Legacy Lecture, they muse on their shared history, including their time at the University of Alaska Fairbanks as well as what lies ahead.

June 10 -  Down Memory Lane with Joan Braddock -  Professor of Biology and Dean, College of Natural Science and Mathematics, 1977-2009

June 17 - Down Memory Lane with Larry Kaplan - Professor of Linguistics and Director of the Alaska Native Language Center, 1974-2017

June 24 -  Down Memory Lane with Pete Pinney - Professor of English and Associate Vice Chancellor for Rural and Community Development, 1985-2017

July 29 -  Down Memory Lane with Phyllis Morrow -  Professor of Anthropology and Dean, College of Liberal Arts, 1987-2007

Aug 5 -  Down Memory Lane with Ron Smith - Professor of Zoology, College of Natural Science and Mathematics, 1968-1997

June 4 -  Understanding Chronic Pain and How It Can Be Conservatively Managed - Rachel Campbell and Jake Kretschmar, Physical Therapists

June 11 -  Headaches and Migraines. How to Tell the Difference and What To Do About It - Dr. Joshua Costello, Chiropractic Medicine

June 18 -  What Does It Take to Be Financially Healthy? - Ben Roth, Financial Advisor

June 25 -  What's In Your Colon? The Connection Between Optimal Health and the Digestive System - Tonya Brown, Licensed Colon Hydrotherapist

July 30 -  Keep Your Smile! How Oral Health & General Health are Interconnected, and Amazing Advances in Dentistry over the Past 45 Years - Dr. Ron Teel, Retired Dentist

May 29 -  What is a Folk School? - Kerri Hamos, Program Director -The Folk School

June 5 -  Climate Change Impacts on Insects in Alaska and Globally - Derek Sikes, Curator of Insects - University of Alaska Museum of the North, Professor of Entomology - Department of Biology and Wildlife

This concert was sponsored by Image Optical

May 29 - Stress and the Balloon Animal Presented by Mike Bork, Stress Management Consultant and Coach

June 12 - Mechanics of Memory: How it Breaks Down and How to Fix It Presented by Scott Luper, Naturopathic Doctor

July 17 - Secrets to Personal Medication Management: at home, during travel, and how to dispose properly of medications Presented by Karen Miller, R.Ph., Registered Pharmacist

July 24 - Travel and Global Health. How to stay healthy and alive when traveling and not become a victim or a public health concern when returning home Presented by Dennis Rogers, PA-C, Certified Physician Assistant

August 7 - What it means to be a Community Hospital and the Foundation Health Partners – Mayo Clinic RelationshipPresented by Michael Swenson, MD, TVC CMO, and Jim Lynch, FMH CEO

May 30 - 30+ Years of Gardening in the Interior Presented by  Terry Reichardt, Master Gardener

July 25 - Alaska at a Crossroads: How the struggle over the Permanent Fund Dividend divides and unites AlaskansPresented by Dermot Cole, Author and Journalist

July 11- Is This an Emergency? Do I Need to See a Doctor Now?   Presented by Anne Hanley, DO, Pediatrician and Mark Simon, MD, Emergency Room Physician

May 31- A Century of Earthquakes in Central Alaska   Presented by  Carl Tape, UAF Associate Professor of Geophysics

June 14- Partnerships in Fire Resilience: How to prevent fires and prepare yourself and your home   Presented by Doug Schrage,Chief, UAF Fire Department

June 21- Adventures of the Sikuliaq: Living and working on a research ship   Presented by Bradley Moran, Dean, College of Fisheries and Ocean Sciences

June 28- To Protect and To Share: A walkabout of two northern national parks with an Oldtyme Ranger   Presented by Greg Dudgeon, Superintendent, Gates of the Arctic National Park and Preserve, and Yukon-Charley Rivers National Preserve

July 26- The 150th Anniversary of the Alaska Purchase  Presented by Dermot Cole, Author and Journalist

August 9- As Green As It Gets  Presented by Karl Kassel, Mayor, Fairbanks North Star Borough

WINTERmester Lecture:  State of the University with President Jim Johnsen

An Evening with Gloria Steinem

2014 Healthy Living and Discover Alaska Lectures are available as a YouTube playlist. Please click the links to view the recordings.

May 19: Incivility and Gridlock in Washington: Why America Needs The Village Square (presentation)