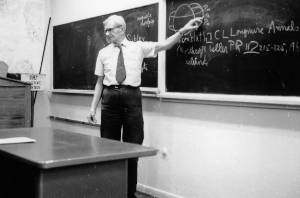 The Alaska State Legislature created the Sydney Chapman Endowed Chair of Physical Sciences in 1983 as the first endowed chair in the University of Alaska system. The position gives students and faculty a chance to learn from distinguished researchers who are pioneers in the physical sciences.

Sydney Chapman was a professor of geophysics at UAF and advisory scientific director of the Geophysical Institute. He was a pioneer in exploring how solar wind interacts with the Earth’s magnetosphere to create “space weather.”  Chapman's most noted mathematical accomplishments were in the field of stochastic processes (random processes), especially Markov processes. 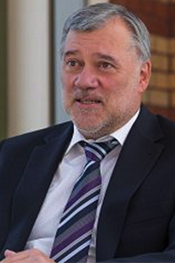 Kurths is known for discovering basic phenomena in complex systems and applying them to several fields. Complex systems are systems with many components that interact with each other. They can range from a small living cell to the entire universe, but the systems all share certain characteristics like a pattern of order in seeming chaos.

He discovered that a phenomenon called phase synchronization, which was observed in pendulum clocks in the 17th century, is also part of complex systems. This led Dr. Kurths to a new understanding of the interaction between the heart rate, respiration and brain activity in humans. He also discovered the phenomenon called complex recurrence and used it to uncover the influence of El Niño on the Indian Monsoon.

Kurths currently serves as professor of nonlinear dynamics at the Institute of Physics in Humboldt University of Berlin in Germany. He is also a lead scientist for Germany’s Potsdam Institute for Climate Impact Research, fellow of the Academia Europaea, and recently became the editor in chief of the journal Chaos, which is one of the American Institute of Physics’ premier science journals.

Here are the past chairs that have help shape the Chapman Chair event:


In 2009, Carmack received the J.P. Tully Medal in Oceanography from the Canadian Meteorological and Oceanographic Society.[8] He would later be appointed the Program Research Director of the Resilience Alliance Board in 2011[9] and retire from the Institute of Ocean Sciences.[10] In 2016, Carmack was replaced as the Sydney Chapman Chair at the University of Alaska Fairbanks by mathematical physicist Jürgen Kurths.[11] Two years later, he was the recipient of the Mohn Prize from the Arctic University of Norway.[12] In 2019, Carmack was appointed an Officer of the Order of Canada.[13]

Carmack's research involves systems-level relationships between oceanography, marine ecosystems and climate. Over his 50 year career he has participated in over 90 field investigations in high-latitude rivers, lakes and seas spanning from the Antarctic to the Arctic and from the Yukon to Siberia. From this he has published over 220 peer-reviewed scientific articles with over 20,000 citations. He pioneered the use of science capable CCG icebreakers and created ongoing studies that engage Northern residents in ocean monitoring.  He has served as Chief Canadian scientist for co-operative studies of the subarctic North Pacific with Russia, for the 1994 Canada/US expedition to the North Pole, and the ‘Canada’s Three Oceans’ project to establish an oceanographic baseline for  the oceans encircling Canada.

In retirement he actively continues field-oriented studies in the Northwest Passage, and locally ‘captains’ his 34’ troller conversion R/V Wicklow to demonstrate values of small boat oceanography.


Untersteiner was one of the pioneers of modern polar science research, a professor of Atmospheric Sciences at the University of Washington, and an AAAS Fellow.[1]

Born in Merano, Italy, he led the Arctic Ice Dynamics Joint Experiment (AIDJEX) in the early 1970s. In 1979, he formed the Arctic Buoy Program as a contribution to the Global Atmospheric Research Program. He then formed the Polar Science Center (PSC) at the University of Washington and directed it from 1981 until 1988.[1]

Keith Runcorn
Keith Runcorn, 1989-1995, was the foremost geophysicist of his generation
(deceased)

Runcorn received many honours, including Fellowship of the Royal Society in 1965, the Gold Medal of the Royal Astronomical Society (RAS) and the Fleming medal of the American Geophysical Union (AGU).[8] He was also a member of the Pontifical Academy of Science. In 1970 he was awarded the Vetlesen Prize, widely considered the highest honor in geology.[9][10] In 1981, Runcorn became a founding member of the World Cultural Council.[11] He served as the Sydney Chapman Endowed Chair in Physical Sciences at the University of Alaska from 1989 to 1995. In 2007 the RAS named an award – for the year's best PhD thesis in geophysics – the Keith Runcorn Prize in his honour.[12]
Syun-Ichi Akasofu
Syun-Ichi Akasofu, 1985-1986, known as a pioneer of aurora research.

He is the founding director of the International Arctic Research Center of the University of Alaska Fairbanks (UAF), serving in that position from the center's establishment in 1998 until January 2007. Previously he had been director of the university's Geophysical Institute from 1986.

Akasofu was director of the Geophysical Institute from 1986 until 1999, during which time the Alaska Volcano Observatory was established and Poker Flat Research Range was modernized. He went on to become the first director of the International Arctic Research Center (IARC) upon its establishment in 1998, and remained in that position until 2007. The same year, the building which houses IARC was named in his honor.

Akasofu has served as an Associate Editor of the Journal of Geophysical Research (1972–74) and the Journal of Geomagnetism & Geoelectricity (1972–present), respectively. Furthermore, he has served as a member of the Editorial Advisory Board of the Planetary Space Science (1969–present), the Editorial Advisory Board of Space Science Reviews (1967–77), and the Editorial Committee of Space Science Reviews (1977–present). As a graduate student, Akasofu was one of the first to understand that the northern aurora was actually an aurora of light surrounding the North Magnetic Pole.[1]