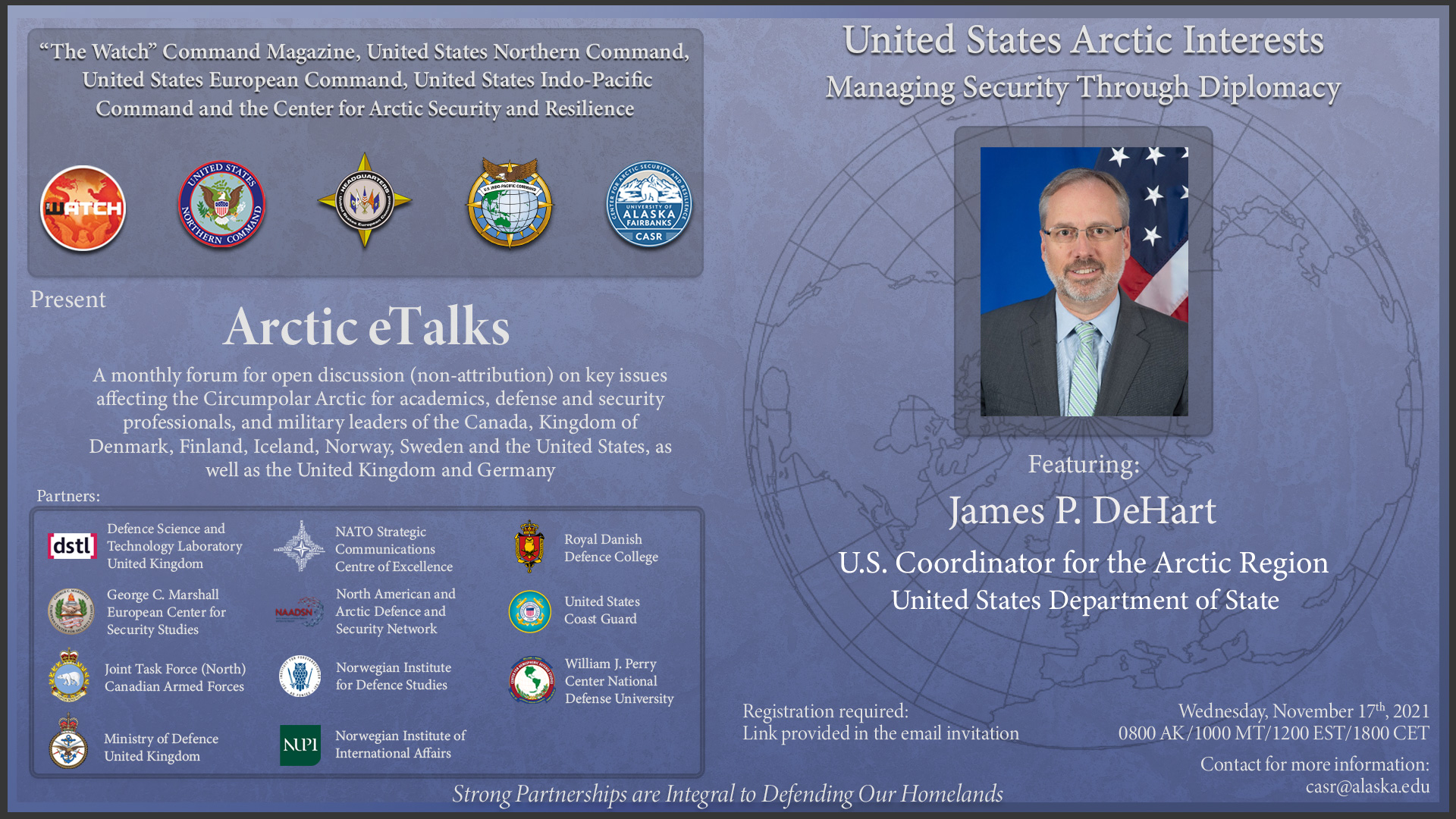 Jim DeHart is a career member of the Senior Foreign Service with 28 years of experience as a U.S. diplomat.  He holds the rank of Minister Counselor.  Jim was appointed as U.S. Coordinator for the Arctic Region in July, 2020.  He brings significant experience in regional security, civilian-military cooperation, and international negotiations.  A hallmark of his career has been close collaboration with U.S. allies and partners to advance our shared interests and values.

As Senior Advisor for Security Negotiations and Agreements from 2019-2020, Jim led the negotiation of status of forces, defense cooperation, and burden-sharing agreements worldwide.  He served twice in Afghanistan – as Assistant Chief of Mission at the U.S. Embassy in Kabul (2018-2019) and in Panjshir Province as Director of the only civilian-led U.S. Provincial Reconstruction Team (2009-2010).  From 2015–2018, Jim served as Deputy Chief of Mission in Oslo, Norway, with extended periods as Chargé d’Affaires.  Previously, he was Acting Deputy Assistant Secretary in the Department of State’s Bureau of International Narcotics and Law Enforcement Affairs (INL) where he oversaw assistance programs in Afghanistan and Pakistan and global programs targeting corruption, money laundering, and organized crime.  From 2010-2013, Jim was Director of the Office of Afghanistan Affairs reporting to the Department’s Special Representative for Afghanistan and Pakistan (SRAP).

Jim was a Rusk Fellow at Georgetown University where he taught a graduate-level course on NATO enlargement and wrote for publication. He served as Director for Central Asia on the National Security Council Staff at the White House and as Deputy Director for Caucasus and Central Asian Affairs at the State Department. He worked for two Under Secretaries of State as Special Assistant for Europe and Eurasia and served overseas at NATO Headquarters in Brussels, Belgium; in Melbourne, Australia; and in Istanbul, Turkey. He also served as desk officer for Greece and in the State Department Operations Center.

Jim was raised in a Foreign Service family in Australia, Hong Kong, the Dominican Republic, Mexico, Washington, DC and Central Oregon. He holds a B.A. from Gonzaga University in Spokane, Washington and a Masters in International Affairs from The Elliott School at George Washington University.