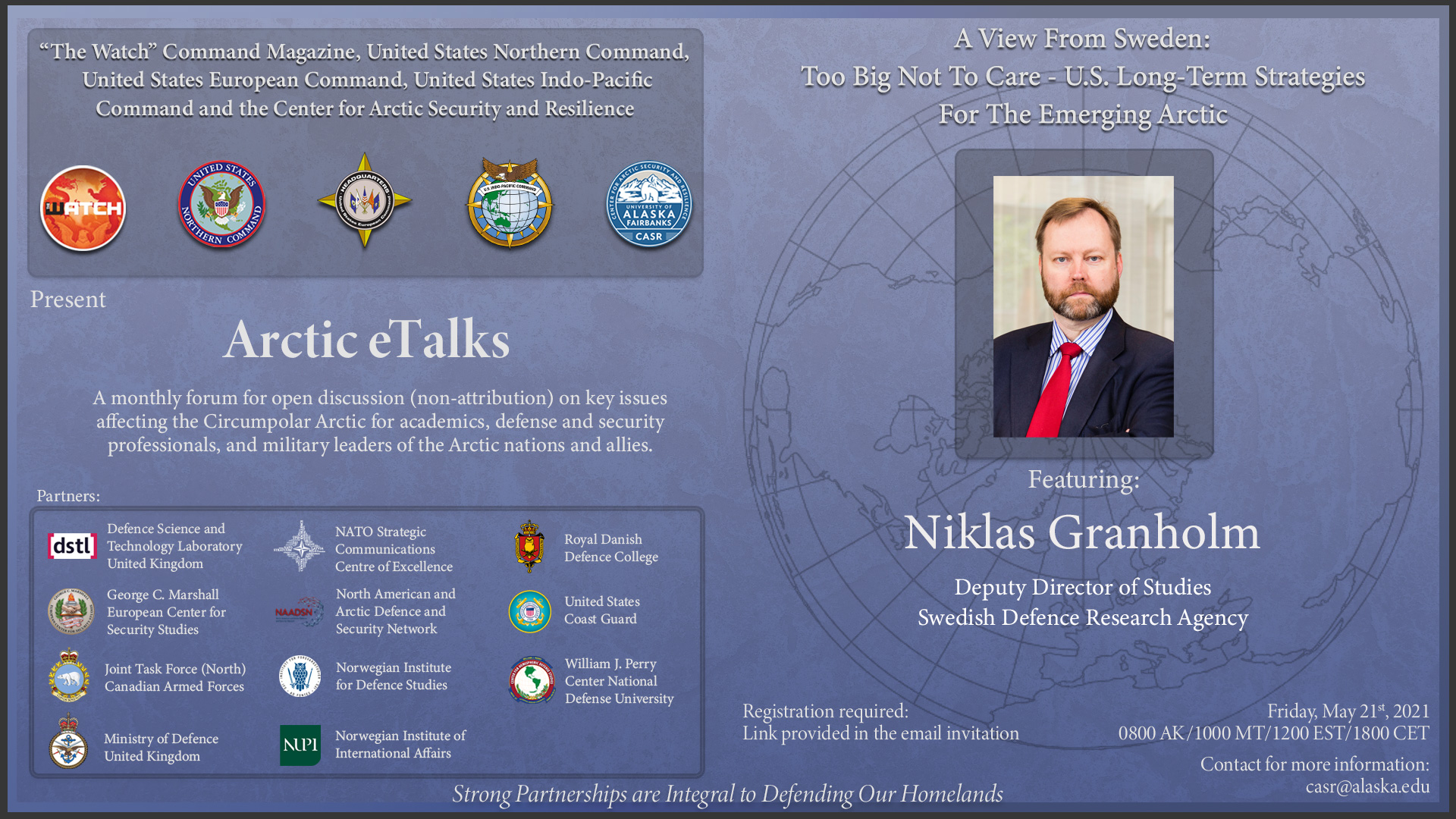 Mr. Niklas Granholm is Deputy Director of Studies at FOI, the Swedish Defence Research Agency, Division for Defence Analysis.
During 2015 and 2016 Mr. Granholm was programme manager for The Nordic and Transatlantic Security Studies Programme (NOTS) with eight analysts, undertaken on behalf of the Swedish Ministry of Defence. The study focus is on security in the Nordic, Baltic and Arctic regions, Europe and North America. Previously, he led a project on behalf of the Swedish Armed Forces on naval and maritime strategy and policy. Between 2012 and 2016 he was in charge of FOI’s part in the EDA-financed consortium studying European defence and security efforts, the European Defence Monitoring Project. Since 2007, he has studied geostrategic change in the Arctic region on behalf of the Ministry for Foreign affairs, the Ministry of Defence and the Swedish Armed Forces.

He was on secondment to the Swedish Ministry for Foreign Affairs, Division for European Security Policy 1997-98 and to the Swedish Ministry of Defence in 2007. During 2006 he was a Visiting Fellow to RUSI and is an Associate Fellow of the institute since 2007. Between 1999 and 2006, he led the study project on international peace support and crisis management operations at FOI on behalf of the Swedish Ministry of Defence. In 1996 he served as Second Secretary at the Embassy of Sweden in Sarajevo. In 2013, he participated in the Arctic research expedition on the Swedish icebreaker Oden, OATRC 2013, in the Fram Strait off the north-eastern coast of Greenland.

In addition to circa 100 FOI-studies and research reports, Mr. Granholm has since his employment at the FOI in 1995, contributed to a number of defence- and security related publications, including the RUSI Journal and the IISS Strategic Survey. In the spring of 2014, he led a group of about 20 FOI-analysts, analysing the ongoing Ukraine crisis, resulting in the study A Rude Awakening. Ramifications of Russian Aggression towards the Ukraine. An analysis of the challenges facing the Royal Swedish Navy published in 2014 was published in the book Small Navies. Strategy and Policy for Small Navies in War and Peace under the auspices of by the Corbett Centre for Maritime Policy Studies, King’s College, London. In 2016, he edited and contributed to an FOI-study on the US, Chinese and Russian strategies for the Arctic, The Big Three in the Arctic. In June 2017, he co-edited an FOI-study on tactical nuclear weapons: Nuclear Weapons for Battlefield Use and European Security. This was followed by a study on the French and British nuclear complexes, Nuclear Weapons in Europe: British and French Deterrence Forces, published in April 2018. In 2019, he contributed with a chapter in the book Europe, Small Navies and Maritime Strategy, also under the auspices of the Corbett Centre for Maritime Policy Studies, focusing on Small Navies and naval Warfare in the Baltic Sea region.

His main fields of interest are future threat developments, strategy, geostrategic change in the Arctic, Nordic-Baltic security, international crisis management / peace-support operations, nuclear issues, naval and maritime policy and military history. He is a frequent participant in and speaker at conferences on international security in Sweden and abroad and comments on defence and security in Swedish and international media. A graduate of Stockholm University, he holds a BA in Political Science and History. While at university, he chaired the International Affairs Committee at the student union and was a member of the board of the Student Union. He is a reserve officer in the Swedish Amphibious Corps with the rank of Lieutenant Colonel. 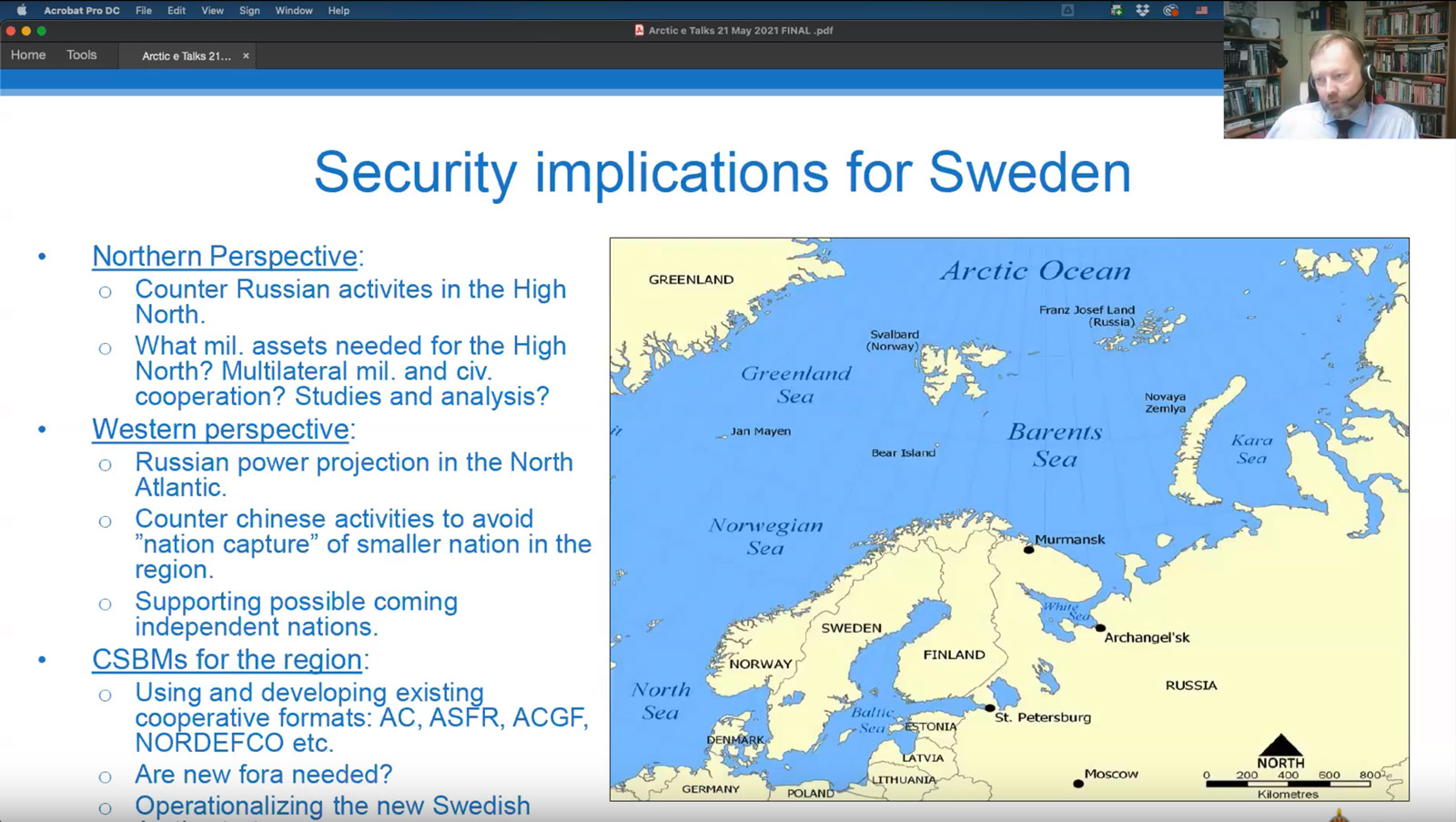